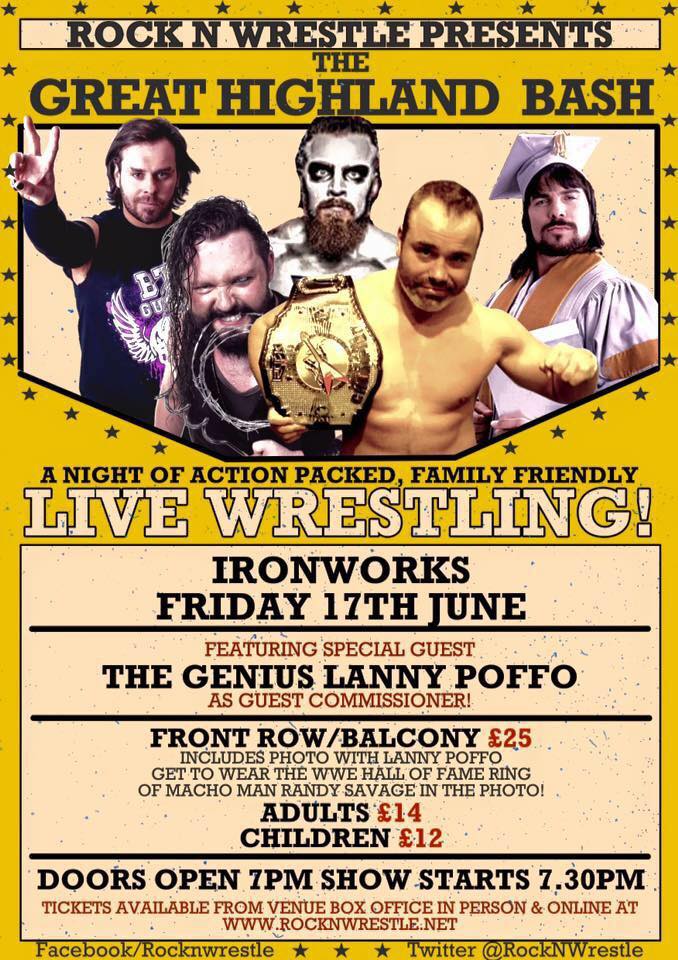 Rock N Wrestle are carving their mark in the Highlands and return to The Ironworks for another night of wild wrestling coupled with the atmosphere of attending a music concert.

Returns, debuts and the usual suspects make their way to the happiest place in Scotland (2014 and 2015 according to an independent survey) for a top night of wrestling.

The special guest commissioner was due to be ‘The Genius’ Lanny Poffo but he had to pull out due to a family issue. We’re still awaiting to find out if there will be a replacement commissioner for the evening.

The first match announced was at WrestleFest when Jack Jester challenged the Highland Champion, Liam Thomson, to a title match for a belt he never lost. RNW COO Steve Robertson granted the match for The Great Highland Bash. Liam Thomson looked impressive, even if he used sneaky tactics and the help of Carmel, to defeat TJ Rage in his first defence at the same event so this will be a very tight contest.

It was announced today that Liam Thomson is injured and will miss this event. Jack Jester has issued an open challenge.

British wrestling royalty comes to Inverness when Roy and Zak of the infamous Knight family, which includes Ricky Knight, Sweet Saraya and former NXT Women’s and WWE Diva’s Champion Paige, make their debut as they face one of the beeeeest tag teams in the UK, Polo Promotions. A clash in style with the brawlers of The UK Hooligans going against the technically sound Jackie Polo and Mark Coffey.

After a loss to Liam Thomson at WrestleFest, TJ Rage will be looking to get back on track when he takes on ‘Iron Man’ Joe Coffey. Two big men clashing with Coffey fresh off appearing at Evolve where he gained plenty of plaudits. I think Rage is still trying to find his footing in Rock N Wrestle, once he decides whether he wants the fans to cheer or boo him then we’ll see TJ Rage become a force to be reckoned with in the Highlands.

A new number one contender will be decided to face either Thomson or Jester when Aaron Echo, current Money in the Bank holder Davey Blaze, BT Gunn and Kenny Williams collide in a Fatal-4-Way. Charles Boddington will no doubt be on hand to help his client Blaze capture the oppurtunity and give Boddington a chance to add the Highland Champion to his ‘Manager of Champions’ resume. All four are viable contenders with BT Gunn being the closest to capturing, one of the few titles that he hasn’t held, on several occasions. Kenny Williams was in the final to crown the first Highland Champion and Davey Blaze of course holds a title shot any time, any place. The big question mark is on Aaron Echo, who has had an up and down time in Rock N Wrestle and his win-loss record is nothing to write home about but he’s big, strong and hungry – a dangerous mix.

Damian O’Connor returns to Rock N Wrestle at The Great Highland Bash, last time we saw ‘The Beast of Belfast’ in Inverness he was defeated by Drew Galloway in an Evolve Heavyweight Championship defence. Since then Damo has been on a rampage all over the globe, winning titles and battering anyone who dares step in the ring with him. So whoever decides to challenge the Irishman might want to wear his brown pants.

Tickets still available so get yours now.