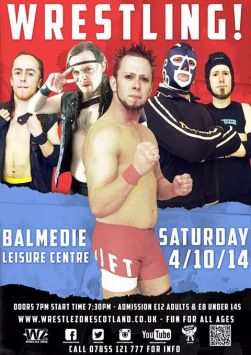 At WrestleZones last event, Mr Malice debuted his Malystos to defeat the Cystos. Los Cystos have been a constant pain in Mr Malice’s backside (literally) for a while and it finally looks like Mr Malice has found a way to get rid of them once and for all. I expect shenanigans.

Scotty Swift and Chris Archer have a long standing rivalry and now that Archer has brought The Alpha Male into the fold, things might not get any better for the Red Haired Warrior. Mr P and Swift are no strangers to each other so will be looking to use their chemistry as a team to split the duo of Archer and The Alpha Male. I don’t think either want to get involved in a fight with The Alpha Male.

A triple threat match made up of a representative of the three premier tag teams in WrestleZone. All three have held gold multiple times in WrestleZone, all three are wily and will do what is required to win. Johnny Lions and William Sterling have been aligned in the past through Sterling Oil and Richard R Russell so will be interesting to see if these two work together during the match. This will be a great match with no clear favourite to win. Last time this type of match was set up Revolution took the win, Johnny Lions will be looking to continue the winning ways.

The second triple threat match with representatives of the tag teams in WrestleZone. This match includes two former Undisputed Champions and all three have held the Tag Team Championships with Damien currently holding the gold (with Johnny Lions). Watch out for Damien in this one, the mastermind behind Revolution always has a trick or two up his hypothetical sleeve but you can’t count out Bryan Tucker or Blue Thunder. Once again there is no clear favourite in this one and it will be a cracking watch.

Kaden Garrick replaces an injured Zach Dynamite to face the number 1 contender to Crusher Craib’s Undisputed Championship. Aspen Faith will be looking to keep the momentum going on his way to Halloween Hijinks but this won’t be walk in the park. Garrick will be looking to hit that spear and derail the momentum train that the The King of Catch is on as he hasn’t lost a singles match since April. KT Kane will be ringside and the Queen of S.M.A.S.H. will be keeping a close eye on things and ready to intervene if required.

Lord Alan Sterling has a renewed confidence, with two wins back to back over Bryan Tucker and Zach Dynamite, he’ll be looking to cap off the resurgence with a big win over Crusher Craib and head to Halloween Hijinks as the champion. The only problem is, Crusher Craib. Having won his title back only at Battle of the Nations, Crusher won’t be ready to relinquish his title just yet. Sterling will have to throw everything at Crusher and it might still be not enough. Crusher got past Andy Wild in Brechin and will have his eyes firmly on Aspen Faith for Halloween Hijinks.

Tickets £12 adults and £8 under 15s on the door. Doors Open 7pm First Bell 7.30pm
VENUE: Balmedie Leisure Centre is located on Eigie Road. There is parking and wheelchair access to the venue available. Balmedie is around eight miles out of Aberdeen and can be accessed by following the A90 north.