Review: WrestleZone ‘Back At The Square 2015’ 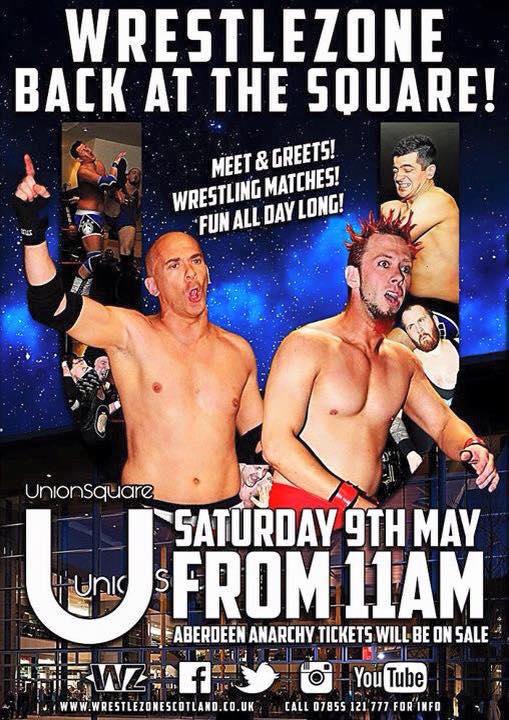 Good evening grapple fans, I had the joy of going to Aberdeen today to watch WrestleZone put on a free show at Union Square to promote the upcoming Aberdeen Anarchy event at the Beach Ballroom on the 23rd.

This review is going to be a little different, there were 17 matches that took place between 11am and 5.30pm so a breakdown of each match relies on a heavy amount of memory usage and the data is running low on the ol’ brain.

I was at the event the whole day minus toilet breaks and a trip to Burger King that Aspen Faith called me out on in front of the crowd. I saw all the matches though and had a great time.

I’ll try and note some of the highlights though. During the first Sammii Jayne vs Debbie Sharpe match there was a guy behind me, who I suspect has autism, he called play by play and it was incredible. He got Debbie’s name wrong so Nikki Sharpe had a good showing.

The wrestlers clearly were having a blast and getting the fun aspect of WrestleZone firmly across to folks stopping to watch.

Sammii Jayne vs Debbie Sharpe got a strong reaction, I was talking to folks who hadn’t watched wrestling since the early 2000s and they were impressed by these two especially. With these two having a strong chemistry, a great match was always going to happen.

With a small roster at Union Square there were multiple appearances from the WrestleZone stars. Chris Archer and Mikkey Vago put in a hell of a shift, it also gave me a chance to see Vago more. He got better as the day went on but he needs to sort his hair, I can’t take a bad guy seriously when he has to sort his bangs every couple seconds. I liked that Archer changed his bandana for each match, a little note.

Bryan Tucker took a bad knock towards the end of the day in the triple threat match, hopefully nothing comes of it with Tucker vs Jester on the horizon at Aberdeen Anarchy.

As always there are some fannies in the crowd, which always seemed to eminate about two metres away from where I was standing…do I attract them? Not the type of fanny magnet I envisioned myself to be.

Aspen Faith and Scotty Swift were especially great with crowd interaction and got a great response whenever they were in the ring.

A great day, the time flew by and that’s a very good sign. Next up is Aberdeen Anarchy on the 23rd, the Beach Ballroom will need to invest in a new roof afterwards.