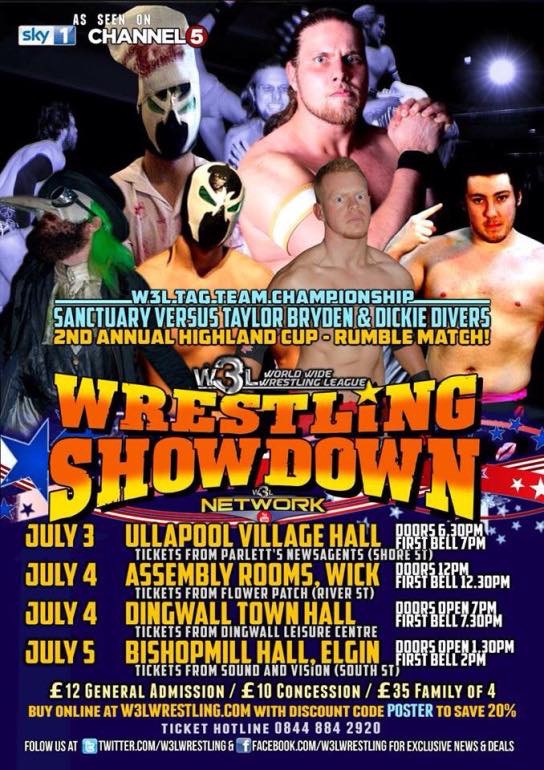 W3L returned to the Bishopmill Hall for the second year running for the last show of their Northern Tour. It was a loud crowd that were ready for an afternoon of wrestling.

Once again this match was brought to you in association with OSWtv as The Bulgarian Baker graced us with his presence. Musso got the crowd into this with plenty shenanigans to kick off involving The Baker’s bread. The scoundrel! The Baker looked the best that I’ve ever seen him, a very fun match to start the show. After Musso defeated Baker, he desecrated the bread by wiping it on his bottom. I hope management was watching!

This was the first time seeing The Scapegoat but not the first time seeing Mr Mackie. He faced Stu Pendous (wonderful name) who was in the best shape I’d seen. A good match, Mackie was on fine form shouting orders at Scapegoat who hit a great deep arm drag to kick off the match. Stu hit a lovely tilt-a-whirl powerslam, it was so pretty. Pendous sold his knee so well that it all came together when Scapegoat locked in a submission to torture the knee. Pendous passed out to give The Santuary the win. The crowd were loud for this and well behind Stu Pendous towards the climax.

Two of my favourite guys to watch in the ring. I hadn’t seen Williams wrestle for over a year and was keen to see how much he’d improved since his injury. And improved he had! Both worked well together. The match was cut short when referee, Sean McLaughlin, was knocked down and The Scapegoat pounced on the leader of the Gamer Club. Mike Musso made the save and challenged The Santuary to a tag team match to even the odds.

More fun and frolics. All four guys put on a good showing. Euan G Mackie though, this guy is just brilliant. I found The Scapegoat a bit bland but he was in the ring with 3 big characters. Musso and Williams worked well together scoring a double pin over The Santuary.

Another very good match, very much consistent with the rest of the show. They started with a brawl around the hall before Faith left Lucian to be slapped and chopped by the children in attendance. Different from usual matches I’ve seen with Faith as he wasn’t as slow, calculating and picking a body part. He was a bit more high risk with a great top rope drop kick but didn’t miss using his wicked forearm shots. I heard a couple of the kids after the show say that “I liked the guy with the pink hashtag” (I did tell them to check out Aspen Faith online). So job well done.

In a change to the scheduled match up, W3L Tag Team Champion Dickie Divers faced Morado. Divers was great as a total arrogant git. Refusing to touch any of the children. Morado got a pounding in this but he did hit a lovely DDT that made Divers transform into a exclamation mark. Divers hit Morado with brass knuckles to score a tainted victory.

I do love battle royals. You get plenty of surprises. The biggest of which was the showdown between Dickie Divers and The Bulgarian Baker before The Baker threw Divers over the top rope before sending Aspen Faith to the same fate. It was down to 3 on 1 between The Santuary and The Bulgarian Baker against Kevin Williams. Williams was dumped out as the tenth and final entrant came out, Stu Pendous. Pendous had a bone to pick with Mackie and Scapegoat from earlier in the evening. He dispatched The Santuary before going face to face with The Bulgarian Baker. The crowd, bar one person, was behind the hometown boy. He threw The Baker over the top rope and eventually eliminated the Bulgarian to win the Northern Cup to send the crowd home happy.

Overall: W3L gets better every year when it comes to town. As I only see it once a year I can see how much better it becomes. With the addition of Aspen Faith, who is currently making appearances for multiple companies, it added an extra bit of gold to an already bursting treasure chest. All the guys involved looked to be in great shape, I have pointed out Lucian Maynard-Smith looking jiggly in the past, and they all put in a great effort. I’m happy to recommend coming to this event even if they only come here once a year.