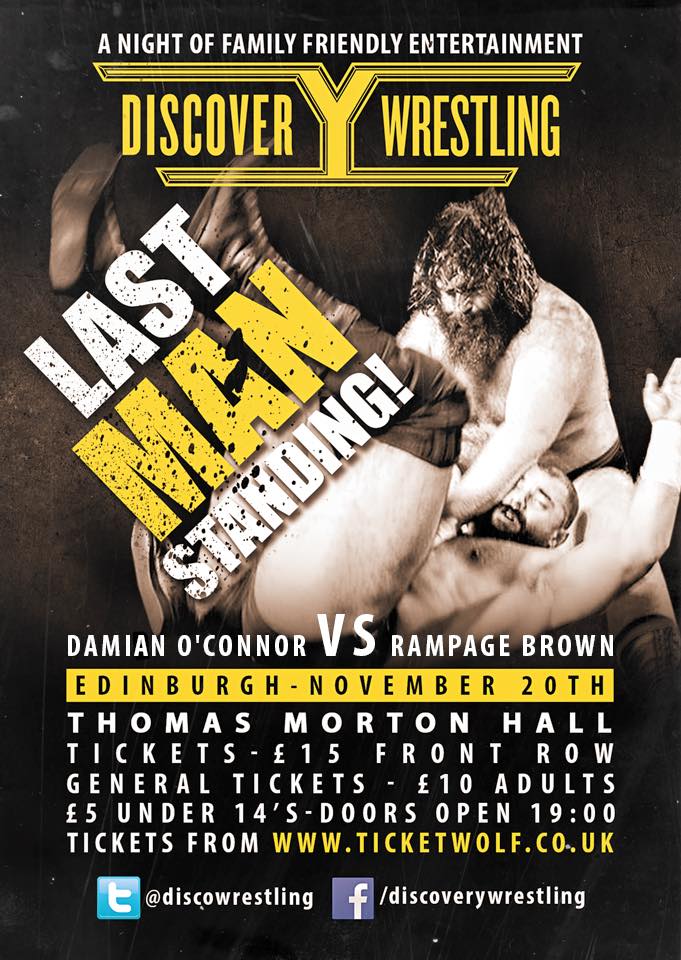 Discovery Wrestling are back in Edinburgh on November 20th as they invade the Thomas Morton Hall for another night of great wrestling action. Discovery have been on a high with Christopher Saynt’s victory at 5 Star Wrestling meaning that they will be featured in the next 5 Star Wrestling game “ReGenesis on PS4, and also announcing that The Innovator of Violence Tommy Dreamer is coming to Edinburgh on February 18th 2016 to The Jam House. So with all these great things coming up in the future, November 20th will certainly be a party atmosphere.

Speaking of party’s it was just announced that Darren T Goss will host Christopher Saynt’s celebration party and that the Welshman has organised a special surprise for Saynt. The number one contender to Chris Sabin’s Y Division Championship has been on fire recently and with a championship match on the horizon, Christopher Saynt won’t be short a few words for the Champion.

Discovery Wrestling have also let us know there will be an announcement regarding Chris Sabin and the Y Division Championship. We’ll be waiting for that with great interest.

Onto the matches, in July Dave Conrad wanted a match, he took his anger of not being booked on Alan Smith, Conrad may regret laying his hands on the Discovery Wrestling co-owner when he faces the monstrous Deviation. It could be bad news for the cocky youngster as he may have bitten off more than he can chew.

BAE Club return to Discovery Wrestling hot off the heels of defeating Viper in July, Viper promised to bring The Best in the Galaxy to even the odds as they face Nikki Storm and Viper’s She-X partner, the debuting Bete Noire. Viper will be watching this one very closely as she will be looking to gain revenge on Sammii Jayne and Debbie Sharpe in the very near future.

Joe Hendry will be looking to continue his undefeated streak against the man he helped, his adopted son, Lou King Sharp defeat at the last Discovery show, the man of the moment, Grado. Grado won’t want to add another loss and will have have his wits about him as we all know that the Local Hero always comes prepared in his hometown and on November 20th it will be no exception.

Discovery host another of their staple, the Y Division 4 Way Elimination match, with four of the finest wrestlers in Scotland, The King of Catch Aspen Faith, Your Mother’s Favourite Wrestler Lou King Sharp, Michael Chase and the debuting Chris Archer. Chris Archer may be unknown to many in the Discovery Wrestling crowd but as a regular of WrestleZone I can tell you that Chris Archer is one of the most devious wrestlers that Discovery Wrestling may’ve ever had, which is saying a lot when Christopher Saynt is on the roster. He will be looking to make a statement against three of the best Discovery has, Aspen Faith will be very familiar with The Outcast and will have a little bit of an edge over Chase and Sharp. This will be a contender for match of the night and that will be some feat considering the line up on tap in the capital.

British Bootcamp II winner, and Impact Wrestling star, Mark Andrews will also be making his debut for Discovery Wrestling as he faces the undefeated Iron Man Joe Coffey. Coffey has faced the toughest wrestlers at Discovery Wrestling from Mike Mondo to Rampage Brown to Chris Hero and Mark Andrews is another test as Joe and a victory will surely be gunning for a shot at Championship gold.

The main event for the evening is the rubber match between Damian O’Connor and Rampage Brown. Both looking to settle the score with one win a piece. Their last two matches were absolute wars and with the added stipulation of Last Man Standing, Edinburgh might be flattened by the end of the evening.

Actually I don’t think I can put the enormity of this match into words, just watch this;

Go buy your tickets now via the Discovery Wrestling website.