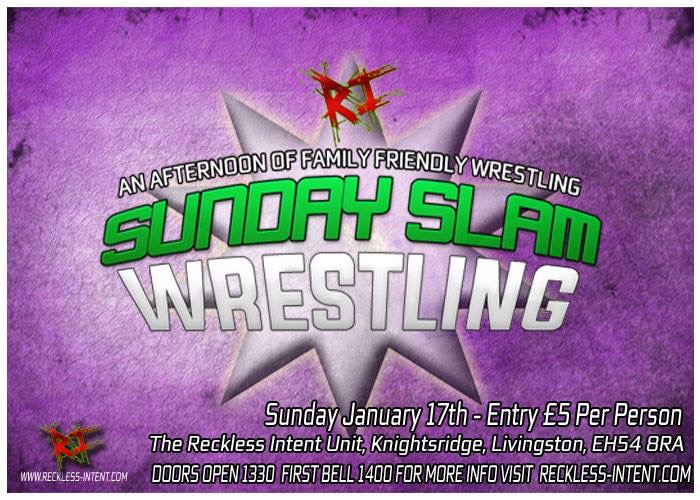 Jam O’Malley is about to step into NAK Country on February 6th but before he defends his Hardcore Championship against Chris Renfrew, he has to deal with the Reckless Intent Original Rawlins after Rawlins interfered in O’Malley’s business at Lights Out. Rawlins is no pushover but he will be keeping an eye out for Italian Stallyon, who aren’t shy about weakening opponents prior to matches.

Rob Mills faces another experienced wrestler in “The Best Young Wrestler” Lewis Girvan. Last time Girvan was at Sunday Slam he failed to leave with the Sunday Slam Wrestling Championship, on that same show Rob Mills put on a performance of a lifetime against Michael Chase. Combine the two and we could see a showstealer. Girvan will need to get back on track if he plans to defeat Theo Doros at Reckless Intent 4 with the possibility of another shot at the Sunday Slam Wrestling Championship if he is the victor.

Talking of showstealers, the current Super B.O.W.L winner versus the current Reckless Rumble winner takes places when LJT faces Michael Chase. Both highflyers and firm fan favourites in Reckless Intent so the roof may explode when they both enter the RI Unit. This one could be an early contender for match of the year as these two are risk takers of the highest caliber. Be prepared for something special when these two lock up.

The highflying Delsin Dayre faces off against Jackie Grady, The ComixZone daredevil against The Dandy. Two that have faced off against each other many times and will have scouted each other for this one. This will be an exciting encounter.

Theo Doros has taken on all comers in Reckless Intent since winning the Sunday Slam Wrestling Championship. From the towering Italian, to the best young wrestler and now he faces the devious Stallyon. Stallyon and Doros have had run-ins in the past so they will have an idea of what to expect from the other. It’ll be another tough test for the Champion.