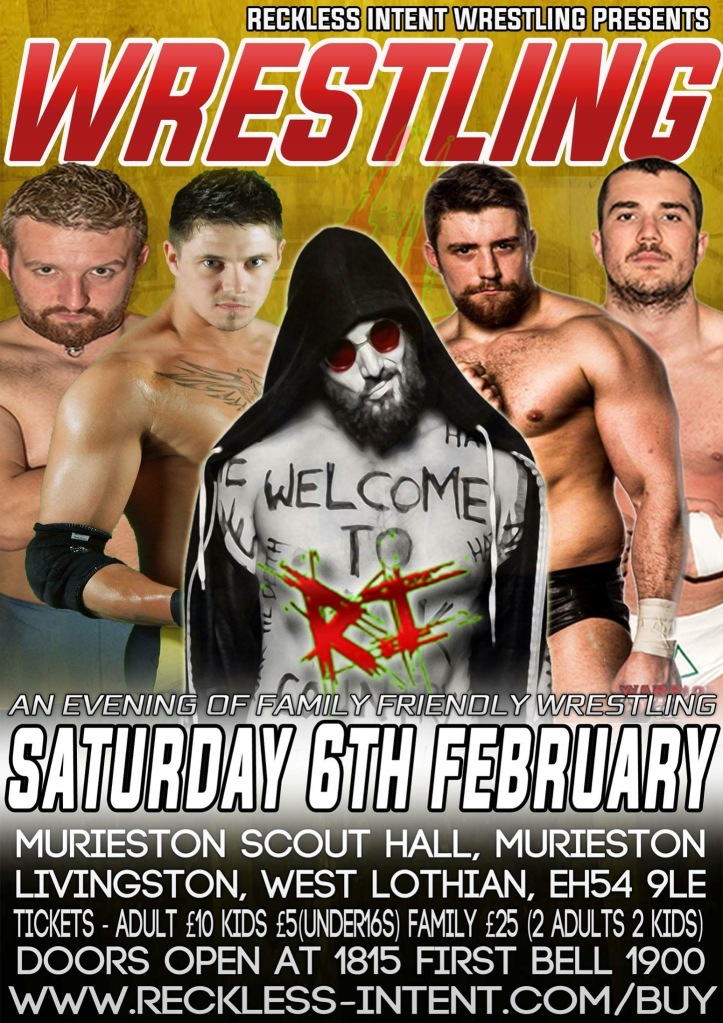 It’s Reckless Intent return to the Murieston Scout Hall on February 6th for a night where the outcome of main event could change everything that RI fans know and love.

Joe Hendry has declared that he plans to leave Reckless Intent entirely with his Reckless Intent Championship as he no longer wishes to come back to Livingston. He’s cited that he has fulfilled his contractal obligations and has done everything a Champion should do. Hendry has recently taken to cheating his way through his title reign after using the title to knock out BT Gunn in his debut. After winning the title and starting his reign in dominant fashion, the fans at RI have been disappointed by the ‘Local Hero’s’ recent actions. Standing opposite him will be the lifeblood of Reckless Intent, The Reckless Rumble winner and RI Original, Michael Chase. Chase has held this title before and is no stranger to holding the gold but there will be the major pressure of being in a must win match against a talented individual, whether you agree with his attitude, you cannot deny that Joe Hendry is a truly remarkable wrestler.

In the other title match of the evening, it will see a grudge match when current Hardcore Champion Jam O’Malley faces Chris Renfrew. O’Malley has been on top of the Hardcore Division for a while now, always finding a way to get the title back into his grasp and always finding a way to use the 24/7 rule to his advantage. He faces one of the most hardcore wrestlers in the country. O’Malley has been a thorn in Renfrew’s side for months, even costing him the RI UK Title. Jam seems to be taken great plessure in poking the bear but there is a sinister motive with O’Malley determined to take over Reckless Intent and taking out someone of the stature and reputation of a Chris Renfrew is a perfect message to anyone that dares try to stop him.

Another grudge match see Darkside faces “The Rebel with a Cause” LJT. Darkside cost LJT a chance at winning The Reckless Rumble and used his chain to inflict further punishment. LJT will hope to gain a measure of revenge but both won’t be taking the other lightly.

In a rematch from Sunday Slam Wrestling, current Sunday Slam Wrestling Champion Theo Doros has a non-title match against “The Best Young Wrestler” Lewis Girvan. Doros has been on a fine roll and has beaten Girvan in the past, this thing with Lewis Girvan is that he not only is “The Best Young Wrestler” but he learns from his mistakes and adapts for when the time comes to face off again. Don’t be surprised to see Girvan have a lot of counters for the offense that Doros has at his disposal.

The ComixZone and Italian Stallyon collide in a tag team match. The dynamic duo of Rawlins and Dayre are a very popular pairing in Reckless Intent but they face a behemoth in Massimo and the cunning and dastardly Stallyon. Two very different teams which makes for an interesting encounter. I can’t see this being the last time these four share a ring.

On February 6th West Lothians own Reckless Intent Wrestling is back at the Murieston Scout Hall for a night of live family friendly professional wrestling.

A great night out for all the family featuring some off the biggest stars in Scottish wrestling including the UK Champion, Massimo Italiano, Chris Renfrew, Michael Chase, LJT, Stallyon, Theo Doros, Darkside and Reckless Intent Champion Joe Hendry.