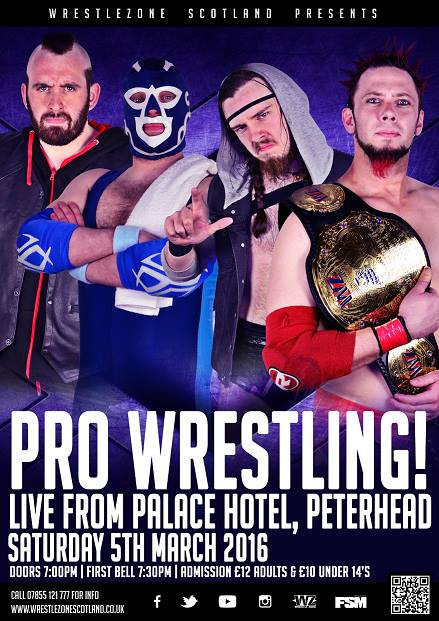 WrestleZone return to Peterhead’s Palace Hotel on Saturday March 5th as the road to the Regal Rumble makes its final stop.

Following two singles losses this past Saturday in Newtonhill, the Rejected will be looking to bounce back with a win over Crusher Craib and Undisputed champion Scotty Swift, a WrestleZone dream team. But will Craib and Swift be able to work together knowing that Crusher could potentially be Swift’s opponent at Aberdeen Anarchy?

A match that was meant to happen in Newtonhill sees Alan Sterling of Sterling Oil face half of the tag team champions Mr P. P was scheduled to face Alan in Newtonhill but the match became a handicap match with the addition on William Sterling. The Sterling Brothers have made it clear that they are coming for the tag titles.

The other half of the tag champions versus the other half of The Sterling Brothers. Kaden Garrick, still unpinned, faces off against William Sterling, who will be looking to make an impact in the tag team division. Lots happening in this division lately.

Peterhead will see a triple threat match with huge Regal Rumble ramifications. The winner will enter at number 20 but whoever gets pinned or forced to tap out will enter at number 1. Blue Thunder will be looking to win to get out of his recent losing streak but a tough task lies ahead in the form of Shawn and Aspen.

Both men missed the Newtonhill show on Saturday, Lions due to car trouble. Malice has been largly unsuccessful since donning the Lord’s cape, his last win being a tag match with Lions as his partner. Johnny will be looking to make an impact on the road to the Regal Rumble.

Andrew Wilde makes his return to WrestleZone against Cysto 1. He has an easy night against Cysto but the Tangerine Dream doesn’t always go away easy.