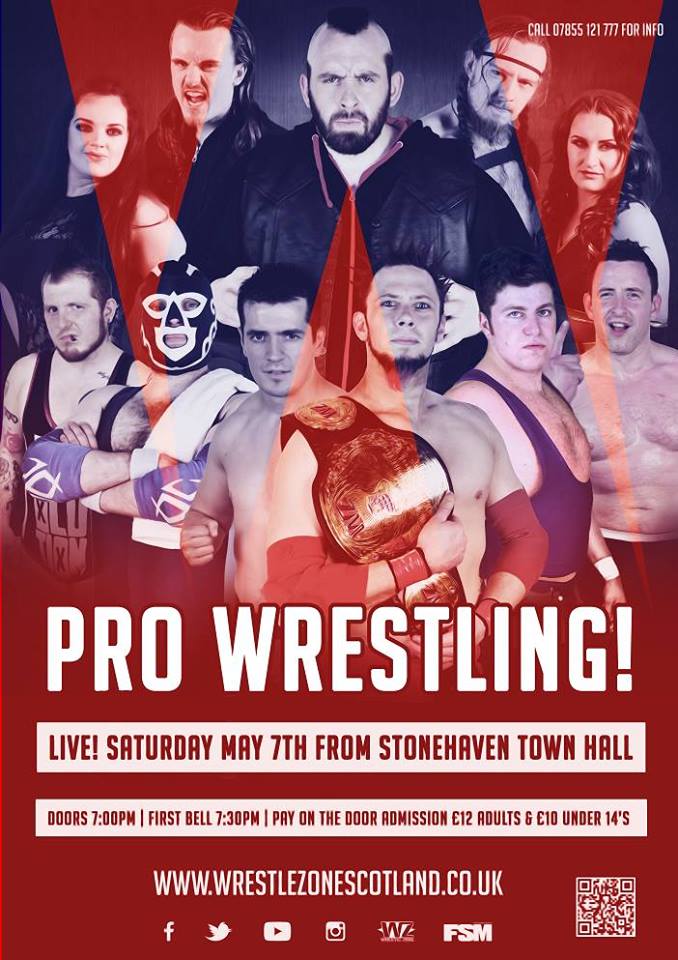 WrestleZone are on the road to Aberdeen Anarchy and Saturday sees their final stop as the stars arrive in Stonehaven. An action packed night as the whole roster looks to make an impact.

The evening’s main event will see the Undisputed Champion Scotty Swift facing Shawn Johnson in a non-title match. With no other defences before his big Aberdeen Anarchy showdown with Crusher Craib, Swift will just be looking to make a statement. Shawn Johnson hasn’t had the best of luck lately, mainly due to a recently returned Bryan Tucker. With the former tag team partners scheduled to face off at the Beach Ballroom, will Bryan make an appearance in Stonehaven?

In a rematch from the show in Westhill last month, Kaden Garrick & Mr P will again defend their tag team titles against William and Alan, The Sterling Brothers. After a disqualification loss in Westhill, Kaden and Mr P will be looking to gain a decisive retain on Saturday.

In a rematch from the Regal Rumble, former tag partners collide as Johnny Lions faces Damien. After a competitive match at The Northern Hotel, Lions came out victorious only to have his head kicked off by a vicious Superkick. If the rematch is just as good as the Rumble then Stonehaven are in for a great treat.

This show is all about rematches as these two teams face off in a rematch from November’s Christmas Chaos (Comes Early!). If that match was any indication of what to expect then Stonehaven will we utterly amazed.

Crusher Craib’s last stop on his road to Aberdeen Anarchy comes in Stonehaven as he competes in a Handicap match as he faces The Rejected pairing of Chris Archer and Mikkey Vago. Archer and Vago have been ruthless since losing the tag titles back in February, but everyone knows that Crusher Craib isn’t an easy to knock down. So will The Rejected be able to tame the beast?

After defeating Lord Mr Malice in Westhill, Blue Thunder (Bruce Thunder according to Malice) was offered a spot in the group of Malice and Jeeves Winchester, which he quickly denied. Malice has brought in a friend, in Andrew Wilde, who will look to make Thunder pay. With both Malice and Winchester set to be at ringside, Blue Thunder will have to keep his eyes peeled.

The event takes place this Saturday, May 7th, at the Stonehaven Town Hall. Doors open at 7 with entry being pay at the door only, priced £12 for adults and £10 for under 14s. WrestleZone will then be at Aberdeen Union Square on Saturday May 21st for a special outdoors event before the big Aberdeen Anarchy show in June.