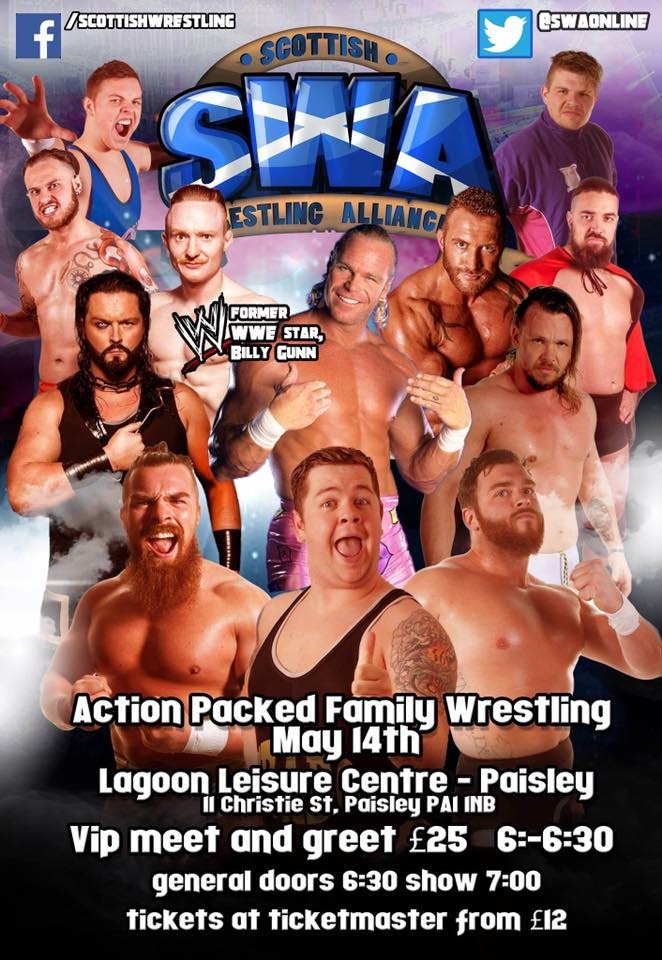 It’s the only show on this weekend so if you’re in the area and need your wrestling fix then there is no excuse to miss this event. An incredible card on offer from the family friendly promotion. It’s a shame that there hasn’t been a lot of advertising or build up to the matches bar the odd posting of the poster on the SWA Facebook page. Let’s have a quick run down of the card.

The full card was revealed 8 days before the show itself, before that only one match was confirmed being Jackie Polo taking on former WWE King of the Ring, Intercontinental, Hardcore and Tag Team Champion, New Age Outlaw and Bad Ass, Billy Gunn.

If you take a look down the line up it’s full of possible match of the year contenders.

The main event of the evening is Mark Coffey defending the SWA Heavyweight Championship against Jack Gallagher in what will be a technical clinic. Having recently retained the title in Motherwell over his own brother, thanks to shenanigans involving Jackie Polo, Mark will be out to continue his winning ways. Jack Gallagher is a man of many talents and facing Mark Coffey will be a match made in heaven.

Speaking of his brother, “Iron Man” Joe Coffey is against “The King of Catch” Aspen Faith in a mouth watering affair. As far as I’m aware this will be the first time that these two face off and I’m excited at the prospect of two excellent wrestlers going one on one.

Joe Hendry versus Jack Jester, two opposites when it comes to their wrestling style with the technical and powerful Hendry against the brawling and wild Jester. Opposites often make for the best bouts and these two are two of the best in the country.

The entertainment of the evening falls on “International Sex Hero” DCT against the enigmatic Grado. Two that are bursting with personality and always leave smiles all round. This should be a really fun contest with the cheese factor up to 11.

A rather odd tag team match is also included as the veteran Mikey Whiplash teams with fellow Englishman Timm Wylie against the young team of Kieran McColm and the SWA Junior Heavyweight Champion Flyin’ Ryan Griffin. This could be a learning curve for the Source Wrestling School students as Whiplash and Wylie are total contrasts with them holding a weight, power and experience advantage.

The big one is “The King of Chat” Jackie Polo going against Billy Gunn. One half of the current SWA Tag Team Champions and one of the beeeeeeeeeest tag teams today, Polo Promotions, against a multiple time WWE Tag Team Champion with Bart Gunn, Road Dogg and Chuck. This will be a fascinating match and worth the price of admission alone.

Six interesting match ups with plenty of great wrestling on hand, could be one of SWA’s best shows of the year.

You can get tickets on Ticketmaster and Ringside World. A packed night of wrestling on the table!