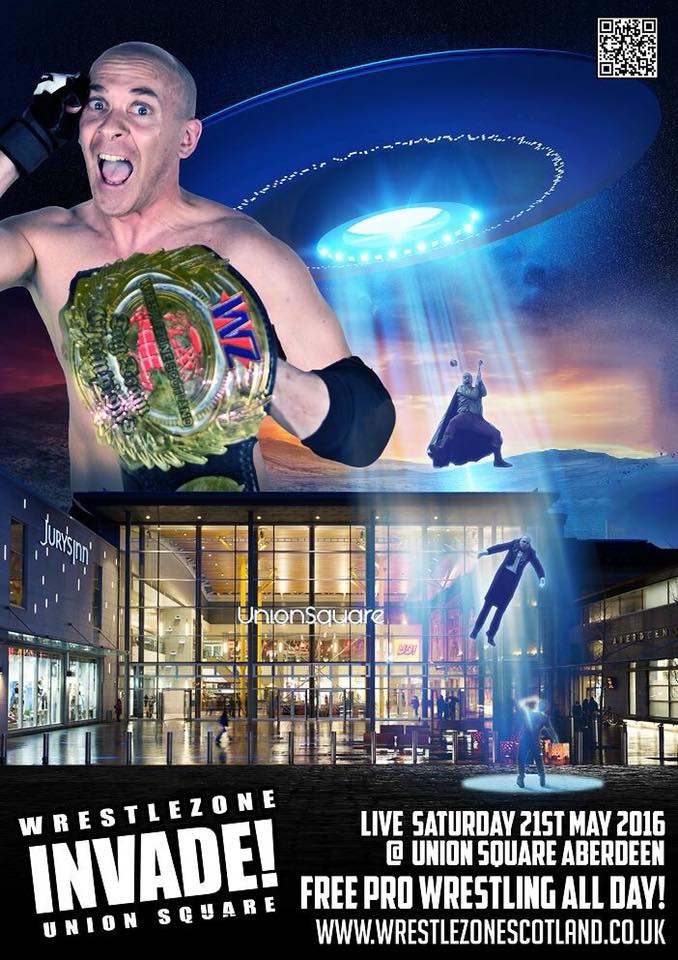 The road to Aberdeen Anarchy is now officially over as the stars of the Granite City returned to Aberdeen’s Union Square on Saturday May 21st. A day full of wrestling action and meet & greets with the wrestlers was sure to bring lots of attention to the upcoming Beach Ballroom supershow. This review will be a little different as a rundown of each match would require a lot of memory. So I’ll give my thoughts on the day and leave results at the bottom.

Thankfully it never rained throughout the day. As usual at Union Square events, there were only a handful of stars there. But WrestleZone were fantastic and put Jimbo Bannon on. My face lit up when he appeared. He’s just amazing. Other stars included the Sterling Brothers, The Rejected and both halves of the Aberdeen Anarchy main event in Crusher Craib and Undisputed champion Scotty Swift.

There were a few personal highlights for me. During one of William Sterling’s matches, he entered the crowd and chased away a fan. I don’t know why but it was one of the best things I’ve seen. The Rejected repeated what they did last year and wore different bandanas for each match. The Aberdeen Anarchy displays of Carlito, Tatanka and the Hurricane almost blew away towards the end so security decided to take them down. Guess The Hurricane came a bit early.

Although it was an outdoors show the matches were still excellent. Aspen Faith and Johnny Lions both had excellent showings in all their bouts. The WrestleZone Dominator put up a fight each time but it was never enough. During the first Scotty Swift vs Dominator match, Crusher Craib came and stood in the crowd to watch his Aberdeen Anarchy opponent, with Swift doing the same in the Battle Royal.

After the Battle Royal, which was meant to be the last match, The WrestleZone Dominator was pushed into the ring and was killed by Crusher. At least that’s what it lookes like. Punches, cannonballs, chokeslams, big boots. Crusher did every move he could on poor Dominator. Scotty Swift then entered the ring but Craib soon left. Chris Archer decided to put out a challenge to Swift for the Undisputed title. Scotty retained after about a 6 second match. He proceeded to lay down so the Dominator could pin him. He got a two before Scotty rolled him up for the win in around a 10 second match, despite the bell never ringing.

Overall, it was a great show with a great crowd. There was the occasional crowd member that said something but thankfully there wasn’t many of them. With Aberdeen Anarchy taking place in 2 weeks, who knows what could happen.