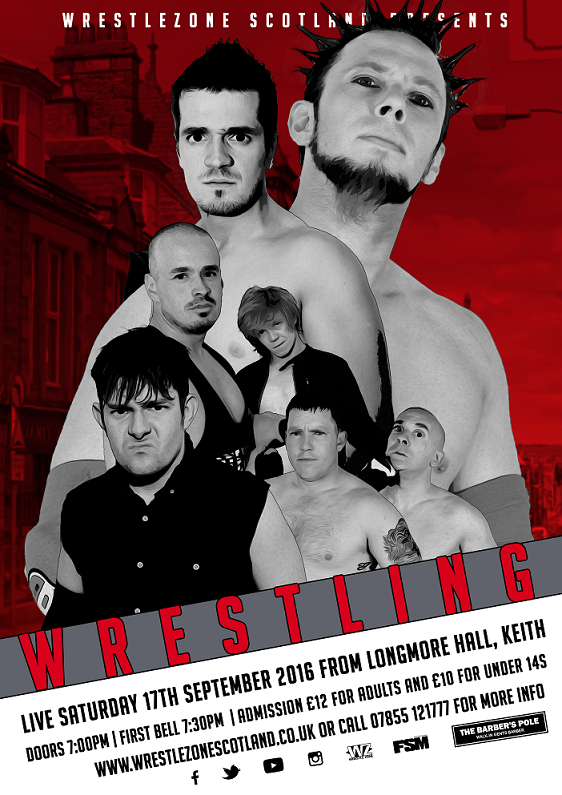 I’m not going to lie, I wasn’t really up for going to the wrestling this weekend, after a horrible week that kicked off with my dog being put down it just wasn’t on my mind to enjoy anything. I’d always been in the mindset to walk it off though and forced myself to carry on, thinking that maybe an evening of folk fighting was the answer. Plus last year’s Keith show was brilliant, like, it shouldn’t have been as good as it was. Then again, I shouldn’t have been surprised as WrestleZone put on consistantly great shows whether it’s in front of 1300 fans in The Beach Ballroom or less than 100 in a wee hall in Keith. If you want a run down of what happened during the matches then I would recommend heading over to Adam’s review as he has done a stellar job.

The thing I like about Shawn Johnson, since joining Sterling Oil, is he has made no changes to his actual moveset and has only added a smug look which is just infuriating to see. He still throws in the flashy moves and springboards but with the extra edge of “I’m doing it because I can and not to please you”. He faced the no nonsense (and no recent wins) Kaden Garrick, who is currently going through a losing streak since being pinned by Alan Sterling at Battle of the Nations. It was once again Alan Sterling that lead to his downfall following a distraction leading to Johnson hitting a fisherman’s driver (name idea: Shawn of the Dread) for the win.

Garrick looked frustrated afterwards, there was no Mr P in his corner so he was left to be outsmarted by Sterling and Johnson.

Shawn Johnson looked great in this one, he should be getting about elsewhere as he is so good right now. Could see him meshing well with the likes of Lewis Girvan.

I don’t think I’ve smiled and laughed so much at a wrestling show for a while, Lord Mr Malice and Jeeves Winchester entered. Usual cape train before Jeeves lost the cape from his hands and stopped…right in front of me. Malice came back round and offered a lucky fan to kiss the Royal ring. I, of course, obliged and bowed to “The Greatest of Alllllll The Malices”. You have to treat royalty with respect, he had a sceptre for goodness sake, plus a cape and a crown! Blue Thunder entered looking (can he be “looking” when he wears a mask?) worse for wear. Noting that he currently is feeling under the weather and disclosed to the referee that he had taken medication beforehand, cold and flu tablets (can they be counted as performance enhancing?).

WrestleZone do like having a silly comedy match on the show and I thank them for that. This was great, Malice trying to escape holds when Thunder started to cough mid-hold. To the point where Malice was telling the referee to stop the match in case he catches something. Jeeves shouting that Thunder is putting everyone in danger. The finish came as Jeeves entered with papertowels after Thunder accidently coughed in Malice’s face, only to get sneezed on! The distraction was enough for Thunder to roll up Malice for the three count. It was fun, silly and very entertaining. It’s not going to win any Meltzer prizes any time soon but I was left with a warm and fuzzy glow that comes from laughter.

The first half main event was for Revolution comrades Johnny Lions and Chris Archer. Lions was popular in the Longmore Hall with his new t-shirt flying off the merch stand, I saw plenty around ringside. A fine match, Archer missed his picturesque elbow drop and a moonsault during the contest before Lions nailed the Lion Cutter to end it.

In my Battle of the Nations review I was hyper critical of Jimbo Bannon, there was nothing I found good in his performance. I don’t know who this guy facing Alan Sterling was but it wasn’t the same Jimbo I saw stink up The Northern Hotel. Vocal, unafraid to fall, his moves were still a little flappy but I’ll take scrappy over sloppy any day. There were some great submission transitions with Jimbo aiming to lock in his armbar, especially towards the end when Alan Sterling got a little cocky and Jimbo lock him into a kneebar. What Jimbo forgot is that Alan Sterling is an expert in MMA, they didn’t call him Mixed Martial Alan for the lolz…

Shawn Johnson provided the distraction that saw Sterling plant his wonderful spike DDT (name idea: The Wonderfall) for the three count. Really good match, far exceeded expectations. Alan Sterling has been putting in great match after great match since Sterling Oil reformed. I also really enjoyed the shenanigans from both him and Shawn Johnson. With William Sterling out injured, and Sterling Oil operating on the Freebird Rule for the Tag Team Championships, I look forward to seeing Alan and Shawn team up down the line.

Sterling Oil were now 2-0 so it made the main event even more interesting with plenty signs pointing to a new champion being crowned.

Broken Bryan Tucker and Vago had a good ol’ fashioned brawl. It wasn’t pretty but the result was effective. Vago rolled up Tucker while holding the tights but was caught by referee Denzil Law, as he argued with ‘The Law’, Tucker rolled up Vago and held the tights for the win. I’m digging this “Lunatic Fringe/Broken” Bryan Tucker we’ve got going on, would like to see him step it up, he used the tights to win tonight so I’d like to see him just attacking anyone or using shady tactics (good or bad) to just get across how mad he’s become since Shawn Johnson stabbed him in the back. Just make him as unhinged as possible.

In a strange observation, Mikkey Vago took off one of his fingerless leather gloves during the match to pound on Tucker a bit. He actually looked a bit more meaner without it and I would think switching to wrist tape might make him look a bit more rougher and biker-y. I hope that made sense. My brain makes points that my fingers can’t type.

A high stakes match which had a tense atmosphere with Scotty Swift and Johnny Lions standing on one side of the ring facing Damien, Alan Sterling, Shawn Johnson and Richard R Russell. A show that you wouldn’t think would see a title change, it certainly felt like there was going to be which is credit to WrestleZone’s build up to the event and the wrestlers involved.

It was a close contest with Swift and Damien generally on equal steading, Swift stepped up a level of aggressiveness as Damien tried to get “The Red Haired Warrior” frustrated and off his game. Amusingly, Damien had pulled Swifts hair that much that he resembled the WWE 2K16 Scotty Swift I created on the PS4. Which was great because there isn’t an option for spikes that match Swift’s ‘do.

As the match approached the conclusion a kerfuffle had broken out ringside which started when Damien cheapshot Lions from behind, with the referee checking on Lions, Shawn Johnson tried to take advantage by entering the ring to attack Swift only to be pulled out by Bryan Tucker. Lions recovered to attack Sterling which distracted Damien long enough for Scotty Swift to hit a Granite City Driver to take the victory. An ironic ending after Johnson and Sterling spent the night distracting each others opponents leading to victory.

You actually felt sorry for Damien at the end as he looked so gutted, everything fell apart around him and he left with nothing. it was wonderful story telling. I was keeping an eye on Johnny Lions after the match, waiting for him to maybe stake a claim on the Undisputed WrestleZone Championship himself but he just celebrated Sterling Oil’s misery and Swift’s win.

A highly charged, emotional contest with so may “will he, won’t he” moments with so many close two counts and counters. Fantastic stuff.

Overall: I went to this show not really fussed, which is a terrible attitude to enter a venue when you’ve laid down the money to watch something and these guys have come down to put on a show. Wrestling is what I use to escape reality for a moment and even though I was feeling down and rubbish, WrestleZone pulled me out of that state for 2 hours. It’s the family atmosphere that they excel at so wonderfully that keeps me coming back and what makes me bang on about how underrated the company is.

Coming out of the show it will be interesting to see how Damien is treated by his Sterling Oil partners, he’s the only one that hasn’t really proved his worth to Richard R Russell. Would also like to see the dynamic between Garrick and Mr P now that Kaden is on this losing streak, this frustration is going to boil over very soon and it’ll just be a question as to who will be in the firing line.

I was really glad to see Jimbo improve, I got a little bit of flack for being a bit mean in the Battle of the Nations review and if he read it and it went in any way to helping him look at what he needed to do then it was worth it because he tightened up near everything I moaned about.

I also went on about the camera work last time which, again, was improved. The cameraman and photographer rarely stood together bar the entrances and at the ring posts which was great, nobody missed any of the action on the most part.

Mr P and Zach Dynamite were on the poster but not on the show, a match wasn’t announced for them but it didn’t lack because they weren’t there. Mr P is one of my favourites so it would have been nice but didn’t spoil the show. Just a little thing to point out.

One final thought…I’d be more than happy to join Sterling Oil if it meant I could get one of their awesome hoodies. I’m easy bought apparently…