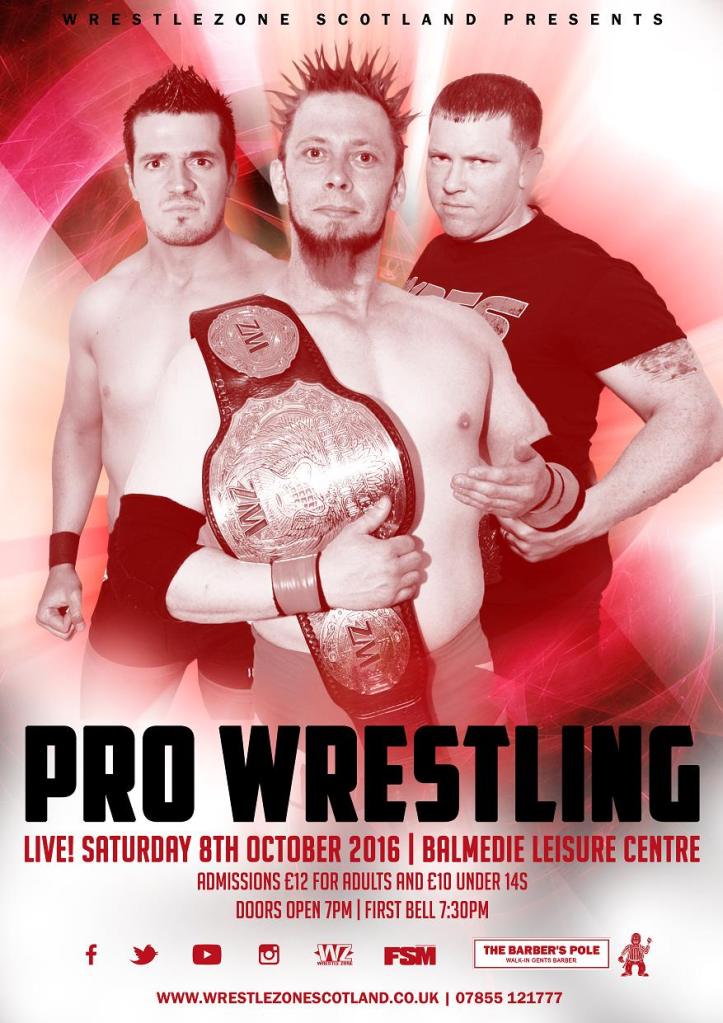 WrestleZone return to the Balmedie Leisure Centre on Saturday October 8th for another action packed night. With Halloween Hijinx in just a few short weeks, every member of the roster will be looking to make an impact.

The main event for this Sarurday night sees Scotty Swift put his Undisputed Title on the line in a huge Triple Threat contest against Kaden Garrick and Sterling Oil’s Shawn Johnson. Kaden is only 2 and a half years into his career and is already a 2-time WrestleZone Tag Team Champion and is now earning his first shot at WrestleZone’s top prize. After cheating to retain the tag belts in Brechin, Shawn Johnson will surely be the main target in this match. This is one of Scotty’s final hurdles before heading to Halloween Hijinx against the winner of the Kincorth battle royal, but it is definitely a tough one.

Chris Archer will square off with Jimbo Bannon this Saturday at the Balmedie Leisure Centre. Jimbo hasn’t had the best of luck lately, losing consecutive matches to Shawn Johnson and then to Damien. This Saturday, he has one half of the Double Denim Duo in “The Outcast” Chris Archer. Archer lost to Johnny Lions in Keith a few weeks ago but rebounded with a win over him in a rematch in Brechin thanks to a distraction from Damien. Nevertheless, this should be a great contest on Saturday between two WrestleZone Training Academy graduates.

Johnny Lions vs The Super Executioner

After losing to Chris Archer in Brechin, Johnny Lions will face The Super Executioner this weekend in Balmedie. After losing his match in Brechin thanks to a distraction from former tag partner Damien, The Tenacious One will want to earn the win in the weeks leading to Halloween Hijinx. He has a tough challenge though, as he faces the dreaded Super Executioner. Executioner earned his first ever win earlier this year in Laurencekirk against Lord Mr Malice with his finisher, The Claw, and is a man not to be messed with. If Damien gets involved again, we could be in for another Super Executioner victory.

In a rematch from WrestleZone’s live events in Banchory and Keith, Bryan Tucker will face Mikkey Vago of The Rejected. Tucker is currently 2-0 in their little series of matches but Vago has the chance to make it 2-1 in Balmedie. Bryan has been engaged in a very intense rivalry as of late with his former tag partner Shawn Johnson since his return in March. Those two are far from done with each other and could very well be leading to a match in the future. The whole deranged Bryan Tucker character has gotten me really engaged in his work since returning.

Sir Andrew Wilde returns to WrestleZone for the first time since Banchory when he defeated Kaden Garrick. This Saturday night he goes one on one with Jason Reed, a relative youngster to professional wrestling. This will be a very intense encounter ,with Jason having the chance to pull off the upset over the veteran Wilde. With the Kincorth event in a week playing host to a #1 Contender’s Battle Royal, both men have the opportunity to prove themselves to Chris McDonald and the rest of WrestleZone management to earn a spot in the match.

Once again, Blue Thunder and Lord Mr Malice will again do battle this Saturday. Malice is now full of the flu after catching it from Thunder a few weeks ago in Keith. WrestleZone’s royal highness will be looking to gain a measure of retribution against the Masked Wonder. At the best of times, Malice isn’t the best and now with flu, he’ll be completely out of it. This should be an easy night for Thunder in Balmedie.

The doors at the Balmedie Leisure Centre open at 7pm, with the action getting underway at 7:30. Entry to the show is pay at the door only, priced £12 for adults and £10 for under 14s.