Preview: WrestleZone ‘Live in Aid of the Kincorth Community Centre 2016’ 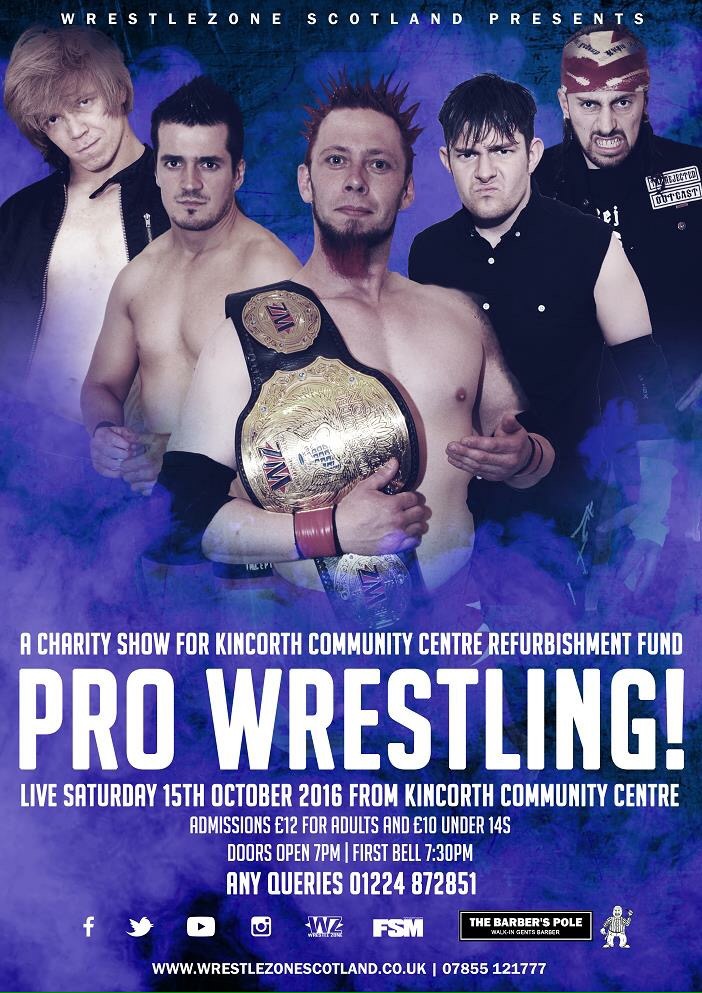 WrestleZone will make their debut in Kincorth this Saturday, October 15th, for a charity show. All proceeds made from the show will go directly to help with the refurbishment of the Kincorth Community Centre, the venue for the evening. A great night of action is set for this Saturday, including a high stakes main event.

The main event for this Saturday’s show will see a huge Battle Royal, with the winner facing Scotty Swift for the Undisputed WrestleZone Title at Halloween Hijinx on October 29th. Although the participants haven’t been announced, names that are likely to be included are the members of Sterling Oil, Zach Dynamite and Bryan Tucker. A huge opportunity is up for a grabs this weekend. Who will go on to face The Red Haired Warrior in 2 weeks time at the Inverurie Town Hall?

Kaden Garrick and Mr P finally get their rematch for the WrestleZone Tag Team Titles as they challenge Sterling Oil’s Alan Sterling and Shawn Johnson in Kincorth. Kaden has been on a rather bad losing streak as of late, with losses to the likes of Shawn Johnson and Andy Wild. Alan and Shawn have been antagonising Kaden about this and how he can’t seem to get a win lately. But all this does is put more anger into Kaden and it’s only a matter of time before he finally snaps. Mr P has been absent from the last few WrestleZone events but will be willing his partner on as they look to become 3-time WrestleZone Tag Team Champions.

At the show in Balmedie last Saturday night, WrestleZone management representative Chris McDonald announced that WrestleZone would be introducing a third title, the Tri-Counties Title. Aspen Faith returned and demanded the title but before he could do anything physical, Blue Thunder made the save. As a result, these two men will do battle in the first match of the tournament. Only one of these men will be able to advance to the next round and move one step closer to becoming the inaugural Tri-Counties Champion.

In the second Tri-Counties Title Tournament Qualifying match of the night, the experienced veteran Andy Wild takes on the rookie Jimbo Bannon. This is a huge opportunity for both men to advance to the round of 8. Andy has been on a huge resurgence as of late and has been picking up win after win, showing his aggressive side throughout. Jimbo Bannon has also picked up a few wins through his short career thus far thanks to his now trademark Armbar. Both of these competitors will look to pick up the win and head on to the Quarterfinals, where they will face either Bryan Tucker or Kaden Garrick.

Scotty Swift will be in action this Saturday in Kincorth as he faces The Rejected’s Mikkey Vago in a Laurencekirk rematch. Although the Undisputed Title isn’t on the line this time around, it gives Mikkey Vago the perfect chance to prove himself. The last time I saw him in action was against Bryan Tucker in Keith, where he really showed he can go the full length. But we can’t count out Scotty Swift. The reigning Undisputed Champion will have the tough task of getting through one of Scotland’s best brawlers. Who knows, we could see this match for the third time at Halloween Hijinx should Mikkey go on to win the main event.

Mikkey Vago’s tag partner Chris Archer will also be in action on Saturday as he faces Bryan Tucker. Bryan and Mikkey have been exchanging blows over the past few weeks, with Bryan picking up the win in all three encounters in Banchory, Keith and Balmedie. Chris Archer recently earned a win against former two-time Undisputed WrestleZone champion Johnny Lions in Brechin, proving himself worthy of hanging with the top guys in the company. Bryan Tucker is one of my current favourites on the WrestleZone roster, and has been since his return at March’s Regal Rumble event. These two have the opportunity to prove themselves this Saturday and possibly earn a spot in the Battle Royal main event.

Entry to the show is priced at £12 for adults and £10 for under 14s, with all proceeds going to charity in aid of a refurbishment for the Kincorth Community Centre. Doors open at 7pm, with the action getting underway at 7:30.