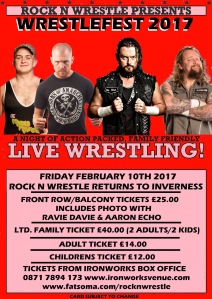 After a two month break Rock N Wrestle return to The Ironworks for the first time in 2017. Two matches announced, a sell out crowd and a Championship match, how was the show I hear you cry? Well I’m getting there…hold your horses.

We arrived five minutes before bell time and got two well placed seats front row, a perfect view for the evening…even a little too close. I like having human shields to protect me and I think if I threw my partner in front of me it would be a little bit of a faux pas…only a little though.

The show suffered a stuttered start with the music cutting out, the wrong music then silence. It was a mess and the crowd were getting a little restless. It eventually got going with Saqib Ali & Prince Asad entering and challenging anyone in the back…then quickly changed their minds and challenged the two boys on ring crew they bullied earlier. Out came Logan Smith & Owen Jakks, who looked no older than 12, I think I have milk in the fridge older. This was a tough watch, between the inexperience of Jakks & Smith and the deer in headlights referee (I assume he is a PBW Academy trainee), it was just messy and disjointed. I’ll take some positives out of this, Logan Smith looked pretty good and is certainly a wee diamond in the rough. A quick roll up saw the young team defeat Ali & Asad. Lets just move on…

We then suffered through the music calamity further before Steve Robertson & Toby Michaels entered to call out Ravie Davie over his plans to rename Rock N Wrestle to Rave N Wrestle. Ravie Davie was a popular boy as he entered and gave his side of the story about thinking that if it was renamed Rave N Wrestle then all his mates would come up from Glesga, that was like…30 or 40 extra seats filled. Steve had enough and we waited…and waited…eventually he called out Kid Fite to deal with Ravie Davie, the pause was the music queue…not queuing. Fite entered to silence, however, Fite incorporated this into additional motivation for being p*ssed off about being in Inverness.

Kicked off straight away with Fite leathering Davie and getting into it with the crowd, bad mouthing the audience while putting the boots to Davie, in his standard entertaining fashion. The top moment was Davie having the upper hand and scaling the top rope for a moonsault, meanwhile Fite had got up and was standing out of the way and we all witnessed Ravie Davie fall with style…and crash to the mat. Another roll up finish but Fite had a handful of Davie’s singlet for the advantage. A very entertaining match which really started the event properly in my opinion. A fan favourite in Ravie Davie and the pure black heart villainy of Kid Fite makes a perfect match. Very easy to watch these two go at it.

First half main event was the Rock N Wrestle Highland Championship, which could be called Highland or Heavyweight…or even just RNW Championship, it seems to change regularly depending on who is talking about it. A little stuttered then Liam Thomson entered to the correct music, hallelujah! We were back on the production track. Thomson flapped his gums to the crowd calling them smelly and that he was better than everyone. Jack Jester entered next and was firmly the favourite in The Ironworks. Thomson attacked the champion from behind while Jester was holding his belt high. This was a fun bout with Jester taking Liam Thomson on a guided tour of the venue, or rather, Thomson lead Jester on a chase around the venue from the production area to the bar and everywhere in between. The match was ended abruptly with Wolfgang coming in and attacking the champion giving Jester the win and retention. He was soon joined by The Purge to form a stable that was all kinds of evil. The trio beat down Jester before Just Uz made the save. Wolfgang said that he was the champion and that it should have been his shot tonight. Jester challenged Wolfgang and his two girlfriends to a match later on against himself and Just Uz. The main event was set and what a main event!

After the break we were treated to my mother’s favourite wrestler and big sexy, Lou King Sharp & Krieger who had the crowd in stitches with their shenanigans. The woman four seats to the right of us was treated to a sexy dance from the pair. TJ Rage and Dylan Angel (replacing the advertised Aaron Echo) entered next and this was all about Sharp & Krieger who entertained with quick quips during the contest and were fun in the ring, especially with their failings, Sharp running head first into TJ Rage’s stomach to little effect comes to mind. It was hard to hate the boastful pair as they were just so damn entertaining. Dylan Angel also looked impressive in this one with plenty high flying to wow the audience. Great match, go see Sharp & Krieger team, like, yesterday. The only drawback was the referee hesitating to count the three count leaving Lou King Sharp looking raging.

There was a face off and big mass brawl to begin with seeing Jester and Wolfgang face off with each holding guard rails, it was on the cards for the this but it did settle down with The Purge & Wolfgang working down Stevie Xavier before it started brawling again with some blistering chops only metres away from where I was seated. It was wild with flying bodies all over the place but really, really entertaining. Wolfgang ended up planted with a Tombstone by Jester for the three count but that wasn’t the end.

After the celebrations were done and Jester & Just Uz had left, Wolfgang & The Purge returned. Wolfgang demanded his title shot there and then but ended up falling off his stool to end the night thoroughly humiliated.

Overall: A night that started slowly with the tag team match and numerous music errors ended with a triumphant conclusion. The second half of the show was a riot, with fun matches to get into, and a joy to watch. The second half is what I expect from Rock N Wrestle and that is the unexpected, brawls and madness. Special mention to the referee who started the show very timid, deer in headlights, quiet and just useless (there is a positive coming) but by the end we saw him grow in confidence, I would venture a guess that it was his first night as referee. I commend Rock N Wrestle for overcoming problems professionally, as a young company it could’ve fallen apart. A wee gem in the Highland capital, quite fantastic that we can see the likes of BT Gunn, Jack Jester & Kid Fite so regularly plus we get to see Wolfgang, a guy who was competing in the WWE United Kingdom Championship Tournament less than a month ago. A fun night, great characters and on June 30th they’ll do it all over again, grab a ticket for it when you can.