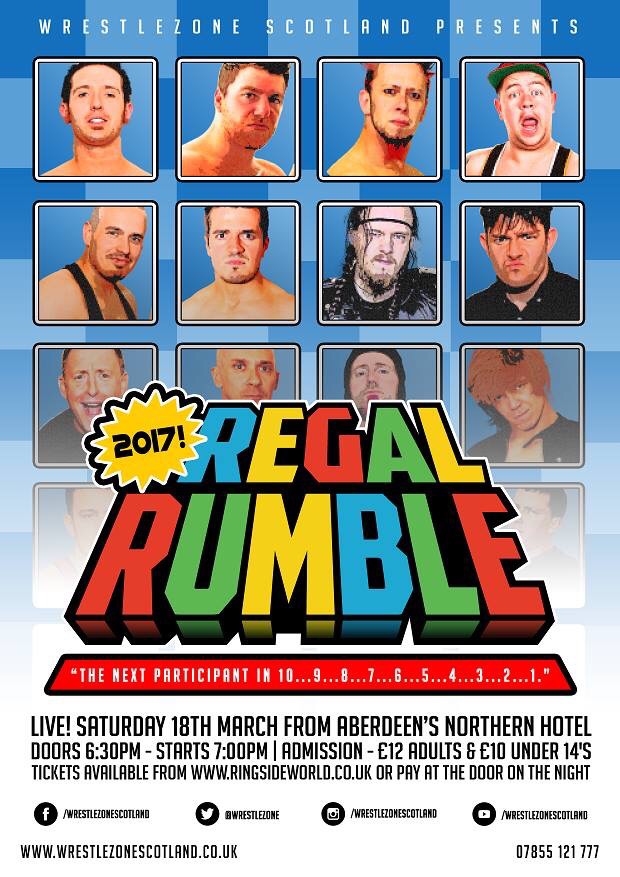 This past Saturday night, the stars of WrestleZone made their way to a packed Northern Hotel in Aberdeen as they presented the 2017 Regal Rumble. By the end of the night, the main event for Aberdeen Anarchy would be sealed. Who would go on to earn the championship opportunity? Read on and find out!

The first contest of the evening would see Aspen Faith and Bingo Ballance face off in the semifinals of the Tri-Counties Title Tournament. Aspen, accompanied by Sammii Jayne, used every trick in the book to hopefully secure his spot in the finals next month in Westhill. Sammii would choke Bingo whenever Aspen distracted the referee. The Zenith of Zero-G soon managed to fight back against The King of Catch following Aspen missing a moonsault, nailing a twisting legdrop out the corner and his signature G17 but it wasn’t enough. Aspen was able to spike Bingo into the mat with a tombstone piledriver, but Ballance just managed to lift his shoulder from the mat. With the match in its last 30 seconds, Faith looked for a second tombstone but it was countered into a victory roll for a very close two count. The time ran out as the match was left without a decisive winner. After speaking to management’s Chris McDonald and Len Ironside, Martyn Clunes announced that both Aspen Faith and Bingo Ballance had been eliminated from the tournament. The fans voiced their displeasure just as much as the wrestlers, but their was nothing to be done about it.

As we took a break from the tournament action, an enormous 10-man tag match was next on the card. Lou King Sharp entered as he told the fans that he was still waiting for an answer from Hornswoggle to have a match at Aberdeen Anarchy. He was soon joined by the entire Sterling Oil faction, before their opponents made their way through the curtain. Grado, as expected, was a favourite inside the Northern Hotel. Richard R. Russell ordered all his men backstage as they felt they didn’t need to have this match. They soon burst back through the curtain following referee Mikey Innes announcing they would be barred from entering the Regal Rumble match if they didn’t return to the ring. Lou King Sharp’s team were able to take the early advantage, backed up at ringside by Russell. With the pint-sized grappler getting a bit too cocky, each member of the opposing team delivered a huge scoop slam to LKS. What happened next was something truly spectacular. All 10 combatants, and even referee Mikey Innes, got involved in a chain of chinlocks in the corner that resulted in the world’s largest jawbreaker. Grado soon planted Damien into the mat with the RGradO for the victory. Lou King Sharp and Sterling Oil returned to the backstage area as Grado and friends celebrated their victory.

Before the next contest, the beautiful Tri-Counties Championship was brought into the ring. Martyn Clunes announced that due to the draw between Aspen Faith and Bingo Ballance, the second semifinal would instead be the final and we would be crowning the first ever champion then and there.

Both Bryan Tucker and Zach Dynamite entered to huge ovations from the Northern Hotel crowd. After trading numerous pinfall attempts, Bryan looked for the Twist of Fate on a number of occasions with Zach managing to fight him off each time. After finally connecting with it, Zach was wise and rolled to the outside. After wasting time getting Dynamite back inside the ring, Bryan was only able to get a two-count from his finisher. Zach fought back into the match and was able to knock Tucker off his feet with the flying knee strike. Tucker managed to get his shoulder off the mat just before the referee got to three. As the two kept fighting, Aspen Faith returned to ringside and clotheslined both men, resulting in the match ending without a decisive winner just like in Aspen vs Bingo. Bingo Ballance ran out to chase off Aspen, but there was a bit of uncertainty as to who attacked Bryan and Zach. Bryan knew that it was Aspen, but Zach believed it was Bingo that attacked them. After a brief staredown between Dynamite and Ballance, everyone made their way to the back as we got set for the first-half main event.

The last match before the interval saw a no disqualifications match as Scotty Swift and Andy Wild collided for the vacant Undisputed Title, with two referees assigned to the match just like in Montrose. Andy made his entrance first, before attacking Scotty from behind. The brawl went up through the crowd before it returned to ringside, where Andy slammed Scotty spine-first across the ring apron, which, if you didn’t know, is the hardest part of the ring. Furious at being unable to secure an early win, Wild shoved down referee Jack Macgregor and stole his belt. What followed were several lashes to the back of Swift, leaving his back the same colour as his hair. But still, it wasn’t enough for the win. Andy retrieved some chairs from the stage to inflict more damage. Scotty managed to reverse Andy’s offense and dumped him on the chairs with an Alabama Slam. Andy regained the control, but made the mistake of laying his hands on the other officials. Sick of Andy’s attitude towards them, Dennis Law and Mikey Innes shoved Wild off where he was caught in a Granite City Driver, just narrowly missing landing on the chairs. Scotty looked for a second Granite City Driver, but Wild dropped down and drove Swift into one of the chairs which had been wedged in the turnbuckle. But Scotty wasn’t giving up that easy. With the advantage back on his side following a low blow, Scotty nailed a second Granite City Driver, this time on the chairs, for the pinfall to become a 2-time Undisputed Champion. The fans were ecstatic as their hero had overcome Andy Wild to once again become the champion.

As Scotty celebrated his title victory, the show went to a short interval, where fans could buy raffle tickets and meet Grado and Lou King Sharp.

As the show came back from the break, it was the match everyone had been waiting for. It was finally time for the 2017 Regal Rumble match. Drawing numbers 1 and 2 were Sterling Oil member Alan Sterling and 1/2 of the current WrestleZone Tag Team Champions, Chris Archer. As they continued their tag title rivalry, Lord Mr Malice and Jeeves Winchester entered to a rapturous ovation. It was clear the Northern Hotel were in favour of a Lord Mr Malice victory. Alan wanted Malice to help him, but was instead planted with a front powerslam. The ring started filling up with names such as Marcus North, Mr P, Shawn Johnson and Aspen Faith staking their claim to lift the Regal Rumble trophy. Johnny Lions and Jimbo Bannon helped each other out in this bout after teaming together earlier in the evening, before Jimbo eliminated Johnny. Jimbo was dumped out soon after, and the two exchanged some harsh words on their way back through the curtain. Lou King Sharp entered as number 14, but was instantly tossed back over the ropes. An interesting point in the match came when Aspen Faith, Bingo Ballance, Bryan Tucker and Zach Dynamite all met in the ring. Following on from the controversy that surrounded the Tri-Counties semifinals earlier in the evening, the four dumped each other out one after the other. After they were all eliminated, they brawled back to the locker room. Grado entered at number 19, with the fans clearly behind him. Number 20 entered and it was Kaden Garrick, who looked to pick the bones of a beaten down Mr P. Setting up for the spear, Mr P dodged his former tag partner and tossed him over the ropes in record time! With that, we were down to the final four of Shawn Johnson, Damien, Grado and Mr P. All four were tossed over the top rope and started brawling, before Grado pointed out it was a bit stupid doing it on the apron. They all slowly got in the ring as the match continued. Richard R. Russell made his way to ringside to cheer on his remaining men, as Sterling Oil now had 1/2 of a chance to win the Regal Rumble. Grado nailed the Roll’N’Slice on both Shawn and Damien, before himself and Mr P teamed up to try and get Damien eliminated. Richard told Shawn to help Damien, but he just stood back and allowed Damien to fall to the floor. He soon eliminated Mr P, as we were down to the final two. With Shawn staggering on the apron, Grado charged towards him only for Sterling Oil’s golden boy to pull the rope down and cause Grado to fall out the ring. Sterling Oil have done it! A member of Sterling Oil has finally won the Regal Rumble! Damien and The Sterling Brothers returned to ringside to join in on the celebrations. Alan and William hoisted Shawn on their shoulders, as Damien looked slightly disgruntled. The new Undisputed Champion Scotty Swift appeared at ringside to congratulate his Aberdeen Anarchy opponent. As Sterling Oil made their way backstage, Damien turned and looked to the crowd before heading through the curtain.

Absolutely phenomenal. A stacked card from top to bottom with plenty questions coming from the show that await answers. Will Shawn Johnson lift the Undisputed Title at Aberdeen Anarchy? Will Damien perhaps turn on Sterling Oil? What’s going on with the Tri-Counties Championship? The road to Aberdeen Anarchy will be a bumpy one, but it’s going to be fantastic!