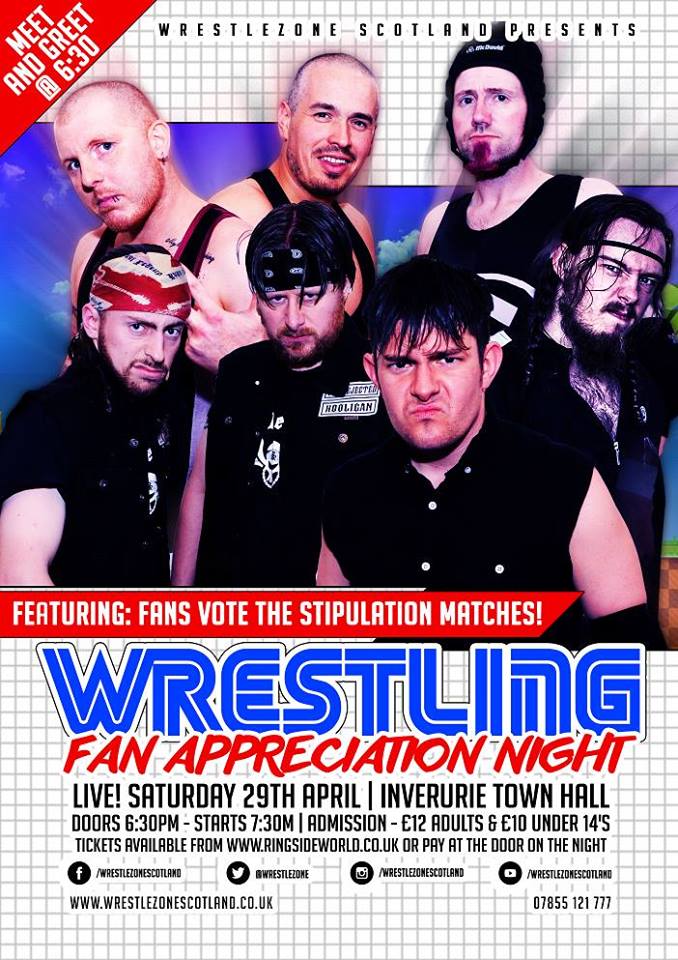 WrestleZone rolled out the red carpet this past Saturday night as they presented a special Fan Appreciation Night from the Inverurie Town Hall. On this night, it wasn’t about furthering the stories heading into Aberdeen Anarchy, it was about the fans.

Before the show officially began, fans were let in to the Inverurie Town Hall at 6:30 to meet their favourite stars for pictures and autographs. The likes of Scotty Swift, The Rejected, Bryan Tucker and Zach Dynamite attended the session.

Martyn Clunes kicked off the show, wasting no time as we got straight in to the first bout.

WrestleZone’s first ever Tables Match, as voted for by the fans, kicked off the show as Aspen Faith with Sammii Jayne by his side faced off against Blue Thunder. As The King & Queen of Catch entered, Sammii hid the table at ringside. Aspen took the early advantage thanks to interference from Sammii, before he set the table up at ringside, attempting to piledrive Thunder off the apron onto the wood. Thunder was able to back drop Aspen back into the ring, before the action returned to ringside. Thunder remained in control and attempted to powerslam Aspen through one of the merchandise tables only for referee Dennis Law to tell him he could only use the table at ringside. Thunder headed back down through the crowd, with Sammii Jayne still trying to hide the table with a towel. The distraction allowed Aspen to regain control, which saw the table brought into the ring for the first time. Both men tried several times to put the other through the wood. One occasion saw Thunder attempt to suplex Aspen through the table, only for Sammii to push the table out the way. After a brief back and forth battle, Aspen countered Blue Thunder’s tornado suplex into a suplex of his own, sending Thunder through the table to pick up the win. Aspen and Sammii celebrated the win as Thunder made his way backstage.

Up next was a rematch from Proving Grounds last July, as the Undisputed Champion Scotty Swift took on The Super Executioner in a non-title Blindfold Match. Scotty made his way to ringside with a can of deodorant for the benefit of fans nearest to The Super Executioner. The match got off to a slow start, as expected, with the fans using the blindfold rules to Swift’s advantage as they blatantly told Executioner to go forward where he tripped over the Undisputed Champion. Executioner tried to remove one of the turnbuckle pads which distracted referee Mikey Innes, allowing him to remove his blindfold and take control over The Red Haired Warrior. The action tumbled down to ringside where Executioner found himself tangled in the ring apron. As Mikey was helping free The Super Executioner, Scotty was trying to get back in the ring on the other side when 2017 Regal Rumble winner Shawn Johnson burst out from backstage and tripped his Aberdeen Anarchy opponent on the ring apron. Shawn ended his attack with a walking cane to the back of Swift and dumped his lifeless body back into the ring. Executioner returned to the ring and pinned Scotty. The Super Executioner now holds two victories in WrestleZone, with the other being over Lord Mr Malice last July. This man is on a roll!

The next bout saw Andy Wild return to the Inverurie Town Hall for the first time since ending Scotty Swift’s 525-day reign as Undisputed Champion as he went one on one with Zach Dynamite. Andy was in control for the majority of the match, using stinging chops to lighten up Zach’s chest. Zach finally gained control as the action made its way to ringside with a stiff kick to Andy’s chest, before he dove on to Andy with a suicide dive. With the Englishman still on his feet, Zach went for a second suicide dive but this time Andy caught him mid-flight and planted him into the hard wooden floor with a belly to belly suplex, just like what he did to Johnny Lions at last year’s Battle of the Nations. With the match returning to the ring, Andy remained in control after executing several more suplexes. Dynamite managed to regain control, countering a Wildest Driver into a sunset flip for a near fall. Zach knocked Andy off his feet before connecting with a huge frog splash off the top rope for another near fall. Andy fought back, performing more suplexes before finally nailing the Wildest Driver for the win. Zach’s back after the match was destroyed after the amount of suplexes he received.

During the interval, fans could purchase raffle tickets and speak to the people from Enjoy Music Festival, who were offering a discounted price on tickets to the event on June 3rd at Hazlehead Park in Aberdeen.

As we came back from the interval, it was time for WrestleZone’s second Kiss My Foot Match as Bryan Tucker faced the royalty that is Lord Mr Malice, accompanied by Jeeves Winchester. Malice somehow took control during the match with some technical holds. Don’t see that every day. As Bryan gained the advantage, Jeeves distracted him from ringside, allowing Malice to be back in control. Malice removed his boot, revealing a sock covered in cat litter. Jeeves pulled out a can of air freshener to rid the Inverurie Town Hall of the smell of Malice’s sock, spraying Tucker in the eyes while doing so. With Tucker temporarily blinded, Malice removed the sock and put it on his hand for a Mandible Claw attempt. Unfortunately for him, Tucker reversed it and sent the sock into Malice’s mouth and also into Jeeves’ mouth for good measure. Tucker followed up with the Twist of Fate for the win. With this victory, it meant Malice would be forced to kiss Tucker’s foot.

Following the match as Bryan was taking off his boot, Malice and Jeeves attacked him from behind. Jeeves grabbed Bryan’s head and took him towards Malice’s foot. Malice, with his eyes shut, didn’t realise that Tucker was able to reverse Jeeves and sent his head into Malice’s foot instead. Malice and Jeeves scampered backstage, Jeeves almost choking on the taste, as Tucker celebrated.

Up next was a rematch from Live in Fraserburgh a few weeks ago, a WrestleZone Training Academy Showcase Match between recent graduates Bradley Evans and “Vintage” Nathan North in a battle between two of Inverurie’s own. Nathan took the early control with some suplexes and a huge back elbow across the knee. The fans got behind Bradley as he started making a comeback, but Nathan regained the advantage. Nathan gloated to the fans throughout the contest, a move that would eventually cost him the win. As Nathan told Bradley to ‘follow the North star’, he hoisted his opponent up in a fireman’s carry. But Bradley managed to drop down and execute his full nelson slam for the second win in a row over North. Not Vintage.

Before the main event, Martyn Clunes drew the raffle with help from WrestleZone management’s Len Ironside. The final ticket chosen would determine the special guest timekeeper for the match, with a young boy called Jack earning the right to do so.

Damien and Alan Sterling entered first, soon joined by Richard R. Russell who introduced 2017 Regal Rumble winner Shawn Johnson. As Shawn entered, his Aberdeen Anarchy opponent Scotty Swift ambushed him from behind in a measure of revenge for Shawn’s actions earlier in the evening. As referees removed Scotty from ringside, it looked as the match would be starting off as a Handicap Match. As a result, Mr P and The Rejected took the early control over Damien and Alan. Shawn joined the action not long after the match began, planting Mr P with a michinoku driver. Bodies started falling out to ringside, with the exception of Chris Archer and Damien. Damien charged towards The Outcast, only to be tossed over the ropes and on to the other 4 combatants. Archer followed this up with a huge somersault dive on to everyone at ringside that received a round of applause from the audience. As the action returned to the ring, all 6 competitors got involved in a tower of doom spot in the corner. With the action slowing down, everyone got time to perform their signature moves, eventually coming down to Mikkey Vago and Alan Sterling. Vago accidentally knocked down referee Dennis Law after colliding with him in the corner, but wasted no time in knocking Alan off his feet with the Headbanger. With no referee in sight, Vago called Jack in to the ring to count the winning pinfall and award the victory to his team. The show ended with Vago, Archer and P posing for photos with Jack.

A successful return to Inverurie on the road to Aberdeen Anarchy. I imagine The Super Executioner will be pleading for a spot on the card following his huge win over the reigning Undisputed Champion. WrestleZone’s next event is at the Stonehaven Town Hall on Saturday May 13th, with tickets available from www.ringsideworld.co.uk.