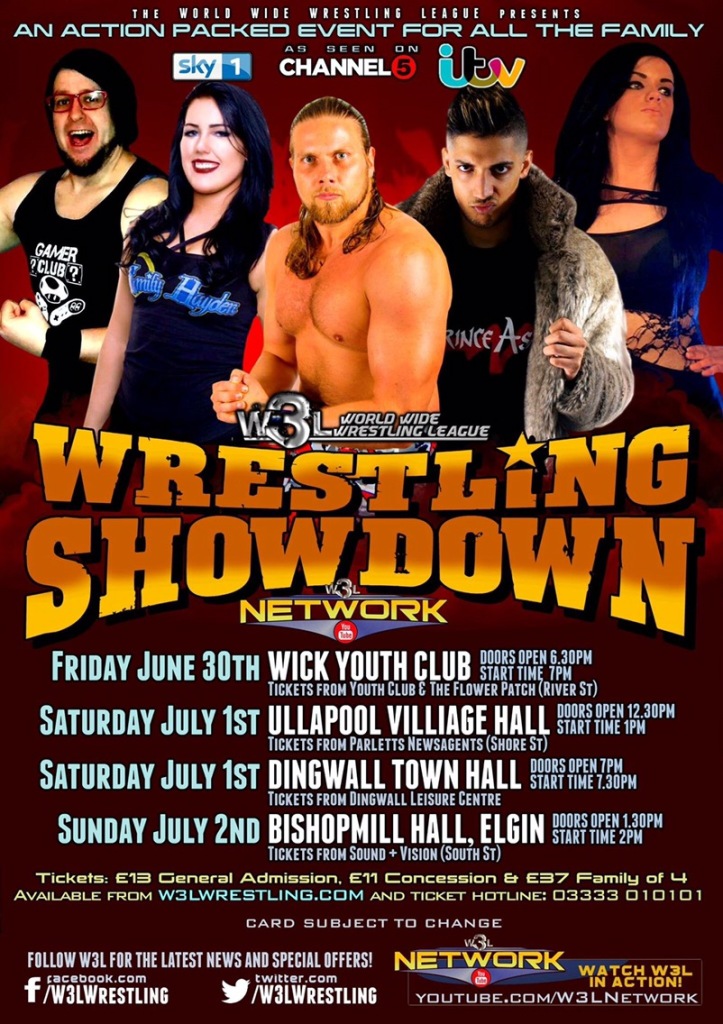 World Wide Wrestling League returned to Elgin on their annual Northern Tour with a some new faces, some old ones and a few welcomed returns. A yearly treat to see The Bulgarian Baker himself Bozidar Branimir. The Bishopmill Hall was packed once again with extra seating being taken out for the extra fans arriving. The crowd were also the loudest I’ve heard from memory.

Stevie Wizard welcomed us to W3L Wrestling Showdown. He announced that there would be an Elgin Invitational to determine the top four contenders for the W3L Heavyweight Championship.

The show kicked off with The Bulgarian Baker himself, as hinted by Mike Musso in our interview, Bozidar has went into carb doughverload and had increased in mass since last seeing him exactly 12 months ago. Bozidar wanted to show everyone his skills from being a former BFL (Bulgarian Football League) player by using his loaf as the ol’ pigskin. This was like watching GLOW, a fleshed out Baker whereas the previous years he’s just come out with his bread and scowled a bit. We even got to hear the man speak, which I can’t remember happening before. His football skills were the yeast of his worries when he was facing Mike Musso. A surprisingly even contest, the Baker attempted to stall as much as possible. There was a tussle over a suplex that was like Godzilla vs King Kong. This is probably the most offense I’ve seen Bozidar have in about 6 years. The bulking up has clearly had an effect in his in ring exploits. It wasn’t enough though and Musso went through to the final with a crossbody. Fun opener with The Bulgarian Baker once again not rising to the occasion.

The second semi was the debuting ‘Dangerous’ Dean Ford who I wasn’t familiar with, as he was attempting to enter the ring his hand must’ve lost grip and he tumbled off the apron with an almighty thud. He soon got up like it never happened while everyone sniggered, though I think this was the moment that he got his head cut. Next to enter was the Super Wrestling Entertainment System himself, Kevin Williams. One of my favourites who I hadn’t seen since the 2015 W3L Northern Tour. After missing last years I was glad to see him back up here. Ford was aggressive in his attack on Williams, punishing him throughout with Williams getting the odd reprieve including getting in the Ba-bomb but it wasn’t enough. Growing frustrated of Williams’ never quit attitude, Ford grabbed the top turnbuckle pad which was enough to distracted the referee and deliver a low blow and spin kick for the victory. By this point his head was bloody and it was flowing down his back. It looked nasty but fair play to Ford, he kept going without letting it get in the way. Ford, as I found out later, is a PBW trainee with little actual match experience which I wouldn’t have guessed. He had his crowd interaction down well and his actual wrestling was solid. One to keep an eye on.

Before the interval we got the ladies of W3L in action in the only advertised match. Debbie Sharpe entered with a bottle with ‘SLIMFAST’ written in sharpie as she offered folk in attendance to have some cause they needed it. Emily Hayden entered, with this being the first time seeing her I was keen to see what she could do. The crowd were quite quiet for this one, much like they are every year, I don’t know what has to be done for the Elgin crowd to actually react to a women’s match. There was some awkward tussles in this one, including the one that saw Debbie offer Emily some of her Slimfast and it ended up with three members of the front row caked in powder. There was some glimmering moments of great stuff that could’ve been really fun to watch but slips here and there seemed to knock the flow of the match.

So the first half included bread, blood and slimfast. The wildest start to a W3L event that I’ve been to that’s for sure.

The second half started with what could be considered my Sophie’s Choice, The Bulgarian Baker against Kevin Williams. Once again the Baker was aggressive in his attack, however, he was easily distracted by the fans shouting. The race for third place broke down, as did Bozidar’s bread when Williams hit two senton splashes onto it while it rested on the Baker’s chest. Which was then presented to the birthday boy over here…

There was also a fight under the ring which saw the ring and canvas shake. Williams finished off the Bulgarian with a discus lariat to take third place.

It was fun, weird and just highly enjoyable.

There was some stalling while the raffle took place as the ring had suffered a malfunction during the previous colossal contest.

The main event was the final to determine the order of the top two contenders for a future W3L Heavyweight Championship match. Mike Musso entered to a big reaction but was jumped by a bandaged up Dean Ford who took a weapon, like a turnbuckle, to Musso’s knee. Determined to make this a quick match, he wanted a count out victory. Musso recovered but Ford would take any chance to go for the knee. Action included a hard scoop slam onto the wooden floor on the outside by Musso onto Ford. A fairly quick match but considering we’d seen Ford bleeding from the head earlier he wouldn’t have been in the best ware to go for long. A spin-out DDT saw Musso pick up the win and the number one contendership to a future title match.

After the match The Bulgarian Baker entered with a table and attacked Musso with the aim to put him through it. Musso countered and attempted the same but the Baker was only saved by the table falling down. Musso challenged Bozidar to a tables match when W3L return to Elgin, after much hesitation, the challenge was accepted.

Overall: What could go wrong, went wrong, but it was down to the staff to recover and they certainly did and rolled with the punches they received. A fun afternoon of wrestling, which is what I go to W3L for. I was particularly impressed with Dean Ford during this show and was very happy to see Kevin Williams, even bought one of his limited edition backwards ‘Gamer Club’ keyrings.

Fun event, I’ll be back next year, as always, plus we’ll get a tables match!