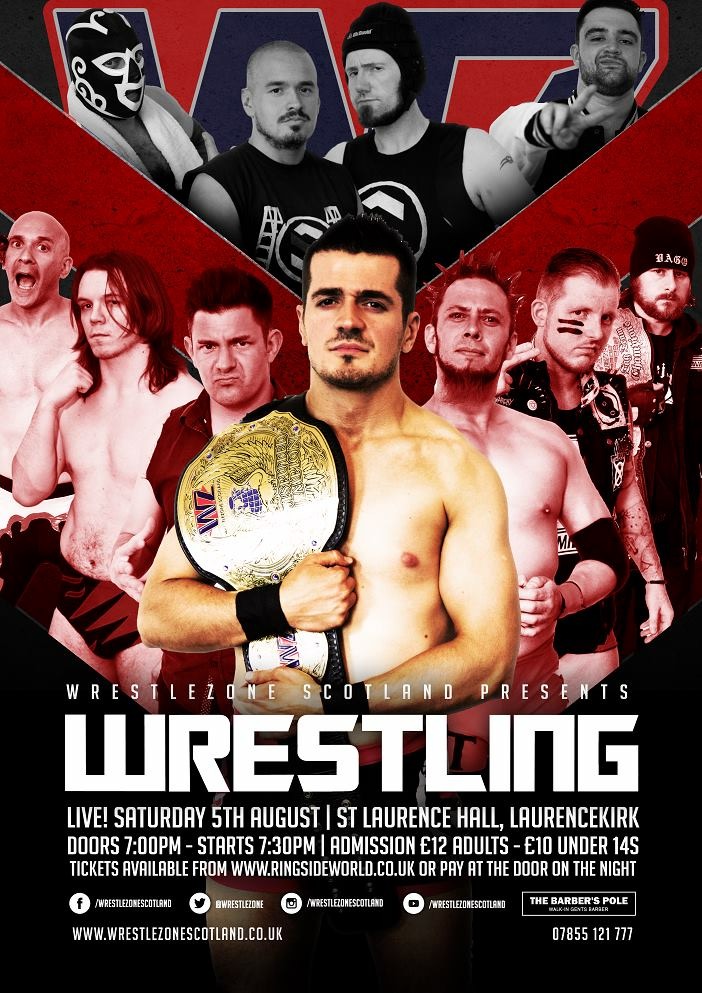 For the last time before Battle of the Nations, the stars of WrestleZone will be in action as they return to the St. Laurence Hall in Laurencekirk this coming Saturday. A huge night of action has been set, with the entire roster out to impress ahead of WrestleZone’s biggest show of the summer. 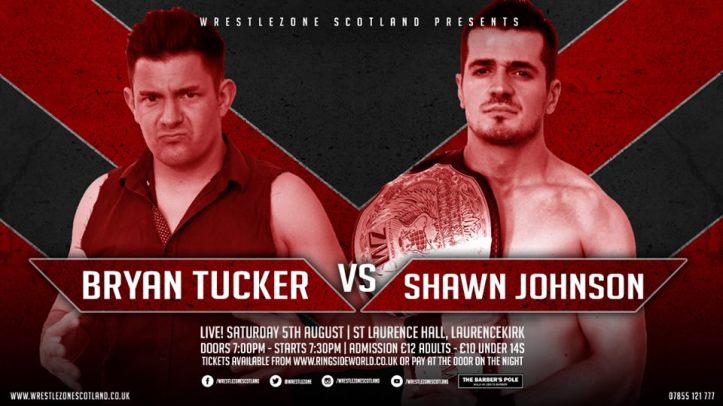 Former tag team partners do battle in Laurencekirk’s main event as Shawn Johnson defends his Undisputed Championship against Bryan Tucker. Since Shawn’s defection to Sterling Oil at Christmas Chaos 2015, the former Granite City Hotshots have faced off three times with Bryan winning on two of the occasions. After winning the gold at Aberdeen Anarchy with help from Sterling Oil’s newest member Crusher Craib, Shawn and Damien haven’t been seeing eye to eye. Shawn retained the gold over Mr P in Ellon after placing Damien in harm’s way, followed by walking out on The Revolutionary at Proving Grounds after they failed to dethrone The Rejected of their Tag Team Championships. Bryan knows what it takes to become Undisputed Champion, holding the gold for a mere 48 days in 2012. Can Bryan become the fourth two-time Undisputed Champion in WrestleZone history this weekend?

Ahead of his huge bout against Crusher Craib at Battle of the Nations, Scotty Swift will face Crusher’s Sterling Oil comrade Alan Sterling in Laurencekirk. Swift will be hoping to exact revenge on a Sterling Oil member in Laurencekirk after Crusher planted him through a table during their contract signing back at Proving Grounds. Speaking about Proving Grounds, Alan Sterling was able to pick up a win over Bradley Evans. With this win, Alan and his brother William will perhaps look to head towards another title shot in the hopes of becoming record-breaking six time Tag Team Champions. 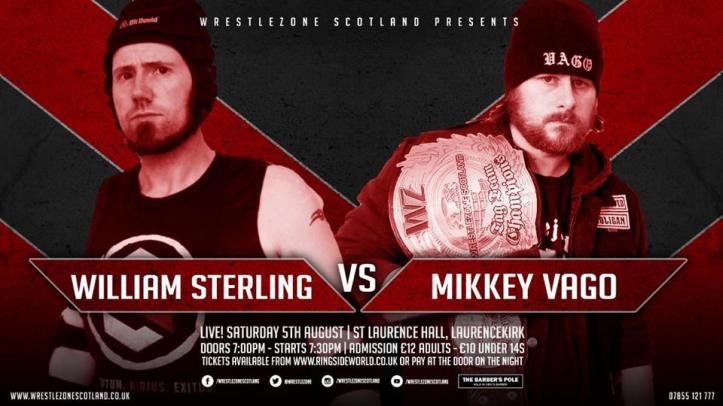 Former bitter rivals collide in Laurencekirk as William Sterling faces 1/2 of the current WrestleZone Tag Team Champions, Mikkey Vago. After The Rejected shocked everyone by answering The Sterling Brothers’ open challenge for the tag titles at January’s Summerhill Showdown, Alan and William have been desperate to get their hands back on the gold. With two failed attempts in Newtonhill and at Aberdeen Anarchy which led to a bald Richard R. Russell, the five-time tag champs will need to impress WrestleZone management enough to earn another shot. With William set to face Mikkey Vago on Saturday, William will hope to pick up a win to get another crack at the gold. 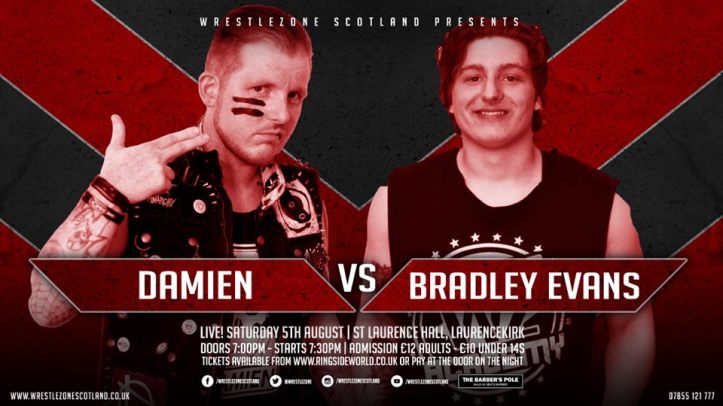 Sterling Oil’s Damien will also be in action this Saturday as he faces Bradley Evans. Damien will hope to get back to winning ways after Shawn Johnson walked out on him following their main event loss at Proving Grounds. Since ending his rivalry with former tag team partner Johnny Lions at Aberdeen Anarchy, The Revolutionary has been unsuccessful within the squared circle. Meanwhile, Bradley Evans knows that a win here over the first-ever Undisputed WrestleZone Champion would do wonders for his career this early on. 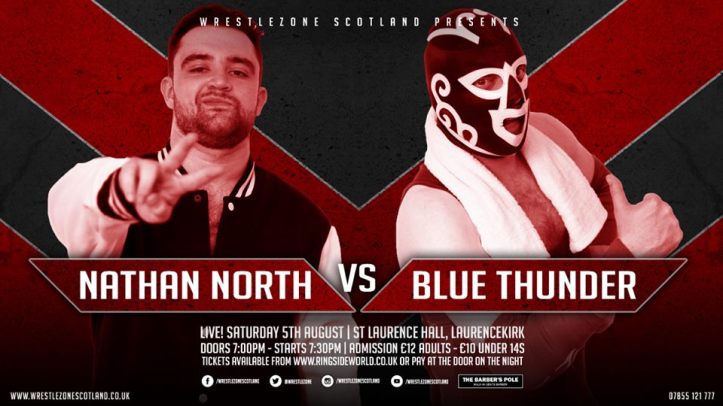 Nathan North will be in action this Saturday, when he goes up against Blue Thunder. Following a recent incident at this year’s Stonehaven Highland Games, WrestleZone management have given Blue Thunder the opportunity to get payback on The Vintage One. After Thunder and Bradley Evans defeated North and Lord Mr Malice during the Aberdeen Anarchy pre-show, Nathan will be hoping to get back to winning ways this Saturday in Laurencekirk. 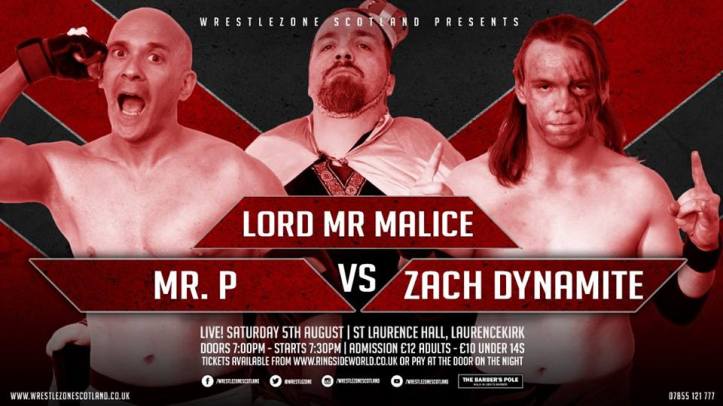 The last match signed for this Saturday is a Triple Threat Match between Mr P, Zach Dynamite and Lord Mr Malice. Malice recently picked up a victory over former two-time Undisputed Champion Scotty Swift in Ellon last month with help from Crusher Craib. His Majesty will surely be riding a wave of momentum heading into Laurencekirk. Meanwhile, Mr P was recently unsuccessful in his attempt to win the Undisputed Championship from Shawn Johnson in Ellon after Shawn used Damien as a distraction. Zach Dynamite will be hoping to get a shot at Aspen Faith’s Tri-Counties Championship after coming so close to becoming the first champion in the Ladder Match back at Aberdeen Anarchy. With Battle of the Nations right around the corner, each of these men will be hoping to pick up the all-important momentum.

Tickets for the show are available from www.ringsideworld.co.uk, priced at £12 for adults and £10 for under 14s. Any remaining tickets will be put on sale on the night. Doors open at 7pm, with the action set to kick off at 7:30.