WrestleZone return to the Northern Hotel in Aberdeen this Saturday night, as they present the 2017 Battle of the Nations. A huge night of action has been signed, with Sterling Oil’s newest member Crusher Craib signed to make his in-ring return, the return of “The Iron Man” Joe Coffey to the north-east and the WrestleZone debut of former WWE United Kingdom Champion, Tyler Bate!

The main event for this year’s Battle of the Nations will see Shawn Johnson put his Undisputed Championship up for grabs in a Triple Threat Match against Zach Dynamite and the returning Joe Coffey. After winning the gold from Scotty Swift at Aberdeen Anarchy, the Sterling Oil golden boy has retained in seperate defences over Mr P and former partner Bryan Tucker but will he be able to hang on to his title against two challengers at once? In one corner is the man who returned to the ring at last year’s Battle of the Nations, the always energised Zach Dynamite. So far in 2017, Dynamite is the only man to have pinned Johnson’s shoulders to the mat, defeating him in a Tri-Counties Championship Tournament Quarterfinal match in January. After returning from injury last year, winning the Undisputed Championship would complete Dynamite’s career. But in the other corner is former Undisputed Champion, “The Iron Man” Joe Coffey. Coffey’s last appearance in a WrestleZone ring came at last year’s Battle of the Nations where he was unsuccessful in a Triple Threat Match against champion Scotty Swift and fellow challenger Damien. Will it be a Sterling Oil retention this Saturday or will a new champion be crowned in either Dynamite or Coffey?

The Tri Counties Championship will also be on the line as Aspen Faith defends his gold against “Tenacious” Johnny Lions. After becoming the first champion in an outstanding Fatal Four Way Ladder Match at Aberdeen Anarchy, The King of Catch has gone on to retain the gold over Bradley Evans in Ellon and then against both Aaron Echo and Krieger at Proving Grounds, with the 10 minute time limit playing to his advantage. During his rivalry with former tag partner Damien, Johnny Lions only received two title opportunities over the course of 18 months as he challenged Andy Wild for the Undisputed Championship twice late last year. The historians among you will remember that it was Johnny that Aspen defeated in the quarterfinals of the 16-man tournament to crown the first champion in Montrose this past February. The Tenacious One will hope for a different outcome this Saturday as he looks to become the first man in WrestleZone to have held the Undisputed, Tri-Counties and Tag Team Championships.

The Rejected will once again their Tag Team Championships against former champs The Sterling Brothers at Battle of the Nations, this time in an Anything Goes Tornado Tag Team Match. After shocking everyone when they answered Alan and William’s open challenge at Summerhill Showdown and won the gold, Archer and Vago have been unstoppable in tag action. After Richard R. Russell inadvertently got his men disqualified in their championship rematch in Newtonill, The Rejected gave the brothers a second chance to win back the gold. The match came at Aberdeen Anarchy earlier this year, with the added stipulation being that Russell would be shaved bald if Alan and William lost. Chris Archer picked up the win for his team, which meant Richard was shaved bald after the match. After Archer picked up a minor injury at Proving Grounds, Vago was left all alone in Laurencekirk as he faced William Sterling. As The Heavy Metal Hooligan was away to win, Alan interfered and the two took advantage of Archer’s absence as they beat down on Vago. As a result, WrestleZone management have scheduled a third rematch between the two teams with all four competitors legal at the same time and no rules in place. With the news that Richard R. Russell will be appearing for the first time since losing his hair in June, officials will have a tough time handling this one come Saturday.

Battle of the Nations Match
Mr P vs Andy Wild

A six-month long rivalry will come to an end at Battle of the Nations as Mr P and Andy Wild represent their respective countries in the annual Battle of the Nations Match. After Wild attacked Mr P backstage following this year’s Regal Rumble Match, the two faced off in Westhill in April where the former Undisputed Champion came out on top with his feet on the ropes. At a live event in Stonehaven the following month, Mr P cost Wild his match against Mikkey Vago which led Wild to cost P and Scotty Swift their main event tag team match against Shawn Johnson and Kid Fite. Seeing this, WrestleZone management allowed both men to pick two partners for a six man tag team match at Aberdeen Anarchy. Wild chose Fite and the debuting Sha Samuels while P chose Grado and 2015 WWE Hall of Fame inductee Rikishi. Mr P’s team picked up the win after P performed an Axe Kick on Wild, but not before Rikishi handed a Stinkface to Wild. With animosity between the two still at an all-time high, management have decided to put national pride on the line. England’s won the match the past two years, with Wild being victorious in it last year. Will it be third time lucky for Scotland?

A huge rematch from the main event of Aberdeen Anarchy 2016 will see Crusher Craib facing off against Scotty Swift. After Crusher suffered an unfortunate hip injury while challenging Swift for the Undisputed Champion at last year’s Beach Ballroom supershow, it put The Creator of Carnage on the shelf for just over a year. After returning at this year’s Anarchy, Crusher announced his intention of returning to in-ring competition at this year’s Battle of the Nations and issued an open challenge. Later that night, Craib came down from commentary to aid Swift after Sterling Oil interfered in his main event title match with 2017 Regal Rumble winner Shawn Johnson. But in a huge shock, Crusher booted the champion in the jaw to allow Johnson to become the new Undisputed Champion. Crusher posted a video not long after the show, saying he wanted Swift at Battle of the Nations, a challenge that would be accepted. Since then, Crusher has cost Scotty his matches against Alan Sterling and Lord Mr Malice, a highly embarrassing loss for the longest-reigning Undisputed Champion in history. During their official contract signing at Proving Grounds in July, Crusher low blowed Swift and slammed him through a table. Crusher has the momentum heading in to the match, but Swift has been unhinged since being screwed out of his title. I imagine this one will go all over the Northern Hotel this weekend.

Ever since Tyler Bate was announced for this year’s Battle of the Nations, fans have been wondering about who his opponent could possibly be with several worthy contenders on the WrestleZone roster. Management have decided who will go one on one with the first ever WWE United Kingdom Champion, as they announced the first ever Undisputed Champion Damien would be facing Bate. Damien has been on a run of bad luck recently, with losses against the likes of former tag team partner Johnny Lions, Bradley Evans and The Rejected. After coming up short in his quest for the WrestleZone Tag Team Championships alongside Sterling Oil partner Shawn Johnson at Proving Grounds, Damien was abandoned by the current Undisputed Champion. If The Revolutionary is able to pick up the victory against a man like Tyler Bate, that will surely do wonders for his career and he could maybe find himself challenging for Shawn’s Undisputed Title in the near future. Damien has stated that the reason he keeps his wrestling abilities in the north-east is because he has a young family to care for but in a match like this, I’m almost certain that the likes of ICW would love to have Damien on their show. 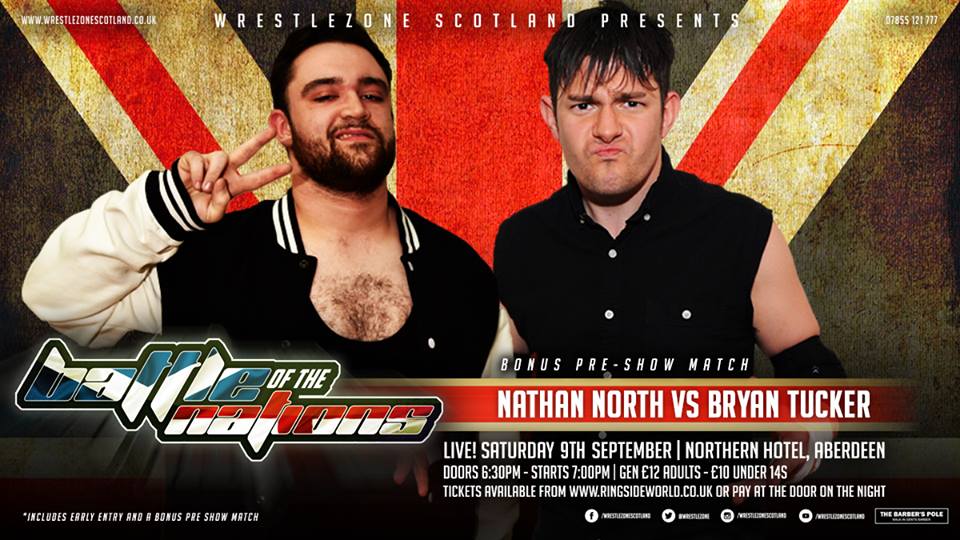 VIP ticket holders will gain early entry to Battle of the Nations, where they will be able to see a pre-show bonus match between Nathan North and Bryan Tucker. Since his debut this past February, I have been nothing but impressed with the abilities displayed by The Vintage One. Recently picking up a win over longtime WrestleZone grappler Blue Thunder in Laurencekirk could potentially be a sign of things to come for Bryan Tucker this Saturday. Tucker is a former Undisputed Champion, a former four-time Tag Team Champion and winner of the 2011 Regal Rumble, but he’s not had the greatest success this year. Losing in the finals of the tournament to crown the first ever Tri-Counties Champion at Aberdeen Anarchy, then failing to win the Undisputed Championship from former tag partner Shawn Johnson in Laurencekirk. If Nathan can defeat Bryan this Saturday, he’ll certainly be on the fast track to win the Tri-Counties Championship. Because that would be vintage.

Fans in attendance on Saturday will also have the chance to purchase the 2017 Aberdeen Anarchy DVD for the first time. Priced at £10, the double disc set will also be available to order online following Battle of the Nations. Plus for the first time, WrestleZone will be able to accept credit card payments at their merchandise table.