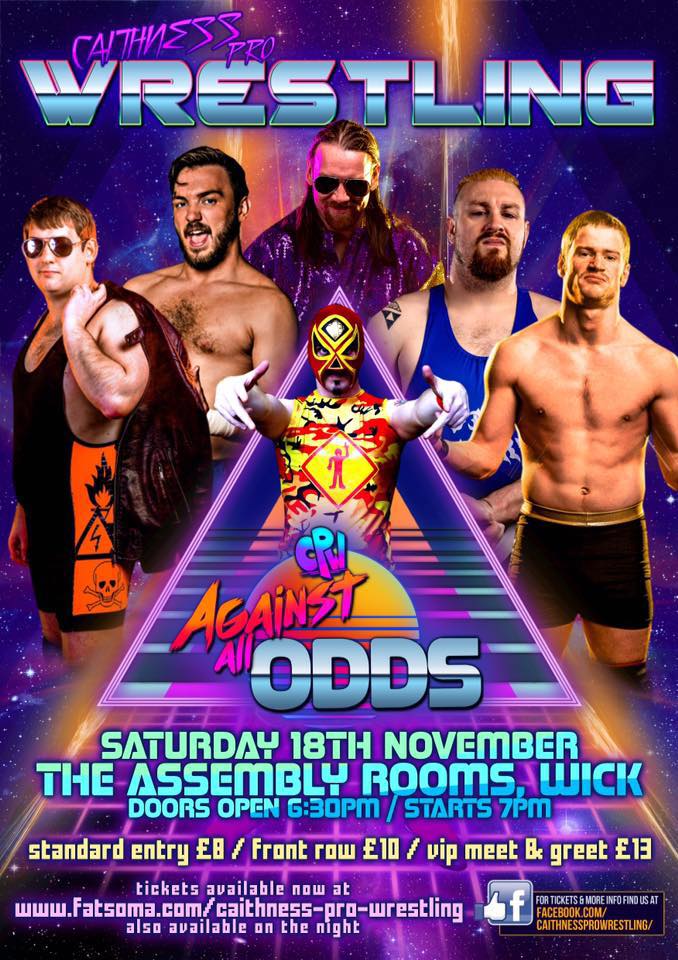 On November 18th, Caithness Pro Wrestling return to The Assembly Rooms in Wick for their last show for 2017. A night with both titles on the line and grudges to be settled. The fallout from Pride of the Highlands takes place with many looking to grab some momentum on route to the CPW Rumble in January.

Scottish Luchador returns to CPW to take on the 2017 Pride of the Highlands winner Glen Dunbar. DS came in all guns blazing but couldn’t overcome Caleb in this first appearance, crashing out of the Pride of the Highlands tournament at the first hurdle. Dunbar has had quite the tear since landing in CPW, winning the tournament and, with that win, holds an opportunity to fight for any title he chooses in the promotion. If anyone knows anything about Lucha DS though is his resolve and that he won’t go down without a fight, he holds a speed advantage over Dunbar whose experience might just edge it.

At Pride of the Highlands Mr E cost Caleb a chance to win the tournament by helping Big Bob overcome the monster. It was a rough night for Mr E after being attacked by Caleb as he got low blowed by Aurora when she revealed her allegiance to The House of Saynt. The wacky Mr E might have a screw loose by picking a fight with the giant who won’t mind trying to knock a few more out of E.

Speaking of The House of Saynt, The Patriarch will be gracing CPW with his presence as Christopher Saynt returns. Having Kitty Trouble and Aurora now in his ranks in CPW he will be even smugger than usual. He’s against the high flying Robbie Solar who is a firm favourite when he comes to Wick. Too polar opposites in style and personality which makes for an interesting clash.

The second semi-final of Pride of the Highlands wasn’t without shenanigans either with Eric Arkham losing out due to King Robert Wishart laying out his opponent, the eventual winner Glen Dunbar, with the plan to make sure Arkham didn’t advance any further, which worked a treat. They meet in a two out of three falls bout for the CPW Highland Regional Championship.

The feud between Bobby Roberts and Connor Rose continues with the CPW Undisputed Championship at stake, both men have traded the belt over the last few events with Roberts capturing the title again at Pride of the Highlands following some assistance. Roberts isn’t ready to give up the top spot in Caithness Pro Wrestling and will win by any means necessary. Roberts attempted to use a steel chair to finally put Rose away but Chapman intervened and used the chair to hit Rose himself to allow Roberts to collect the pinfall. Connor Rose puts himself in the danger zone by not only requesting his rematch for the title but electing to get a measure of vengeance on the same night.

Rose also takes on former best friend, turned bitter enemy, Lad Chapman. Chapman cost Rose his Undisputed Championship following a chair shot which allowed Roberts to pick up the victory. Chapman’s turn came out of nowhere with him coming out to celebrate with Rose when he won the title at Northern Fights. Maybe the green mist decended from there with his loss to Dunbar being the straw that broke the camels back. Chapman promised that his intentions will be revealed in time but on his terms.

A night of grudge matches and title bouts make for a wild show at The Assembly Rooms in Wick. Tickets are available through Fatsoma here. You can also get VIP tickets and meet some of the wrestlers that are on the show including Lucha DS.