It’s been coming up to four years since we’ve interviewed you so first things first, how are you doing?

Better than ever, I’ve still got a tub of celebrations and the festive season ain’t done till they are!

In that four years you’ve won a few titles around the country and you are the current PBW King of Cruisers, how would you describe your evolution and are there any moments or highlights that you are particularly proud off?

King of Cruisers is certainly something I’m extremely proud of. When you look at the guys who have took part in, and won, the King Of Cruisers, there’s worse crowds to be a part of. It’s something I had been aiming for for a long time but I had almost accepted it wasn’t gonna happen considering I had already been in three and have the tag title so it was a kind of ‘shit it’s actually happening’ kind of moment when I found out, going forward I’d like to make a bigger deal of the fact that I have the trophy as I don’t think that’s really been done with it yet.

As far as evolution goes I think my character has changed quite significantly and I think that came from trying to be myself as opposed to trying to play a character, the same goes for my in ring work, before I think I was a lot more fast paced and I tried to work a style I perceived as popular, it took me a while to realise that I’m better off doing what I’m good at and doing it well. I’m the first to admit that might not be a lot but I’m confident that I do what I know extremely well. Since I started to change as a wrestler one thing in particular I’m really proud of is the work we’ve done in ICW as The Fite Network against Bad Company, I feel it really gave me the chance to show I can do more than just comedy (by more I mean I’m willing get flung off shit, but more nonetheless) it’s also given me the chance to solidify myself as part of the ICW roster in the past with ICW one minute I was there the next I wasn’t, but this feud in particular, I think, gave me the chance to show that I have something to offer and I can offer something that not a lot of others can which proves (to me at least) that I’ve worked my way onto and earned my place on not just one of the best rosters in the UK but one of the best rosters in the world.

You’ve formed some fun tag teams in the last few years, with Krieger in PBW, Michael Chase in Discovery Wrestling and Kid Fite in WCPW for example, along with combining with Fite and Krieger to form The Fite Network in ICW and Rock N Wrestle. Is tag team wrestling something you enjoy doing and would there be anyone that you’d like to team up with in the future?

I love tag wrestling, the stuff I’ve been doing on family shows, mainly PBW, with Krieger is the most fun I’ve had in wrestling and is definitely something I’d like to carry on doing despite how much of a wank he is. In all seriousness though, the work I’ve done with Krieger means a lot to me as before we where put together by Ross we had barely spoke, where as now after being stuck with him for about 2 years he’s begrudgingly become one of my best mates on top of the fact that he’s the other half of the most successful tag team I’ve ever been a part of. To be honest, I’m not looking to forge any new tag teams but instead I’d like to continue building The Fite Network in any of its variations be it me and Krieger, me and Kid Fite or the three of us as a unit. Other than that I would quite like to be able to do some stuff as GTA with Donnie T again. It’s always a lot of fun and we’ve got an amazing connection, it’s just a case of finding the right place to do it because we’re both doing our individual thing now but I’m 100% open to it. If I had to chose someone to tag with that I haven’t before it would be Prince Asad I reckon we could do some right funny stuff and it’s something we’ve spoke about a lot so it would be a good laugh, basically I’d just want to cut about with my mates.

Last year I saw you tower over Hornswoggle at WrestleZone Aberdeen Anarchy, how did it feel coming into that match and what were your thoughts on it?

I really enjoyed it but going into it I was fairly shiten myself, there was a lot of folk taking about it so I felt like there was a lot more pressure than usual but Hornswoggle was brand new and was amazing to work with. It’s a great learning experience working with someone who’s worked for WWE for so many years and especially at The Beach Ballroom, WrestleZone put on amazing shows all year round but their Aberdeen Anarchy show is where they go all out and it’s without a doubt their best show of the year.

More recently you made your US debut at I Believe In Wrestling against Jon Cruz, what was is like going out in front of an American audience that might not be as familiar with your character?

I really didn’t know how they where going to take to me but I’m really happy with how it all went, going in I didn’t think they’d find me funny and I didn’t think they’d understand what I was saying, I don’t think they had a clue what I was saying but they seemed to laugh at it so I loved it and Jon Cruz was amazing as well if any UK fans are unfamiliar with him I’d 100% recommend checking him out, it was definitely a great experience being able to work with a guy who regularly works with some of the biggest promotions in wrestling, hopefully somewhere down the line we can do it again. I also had the chance to work with Atomic Wrestling Entertainment in Cocoa against Chasyn Rance who was also the guy who got me on the show and had booked me at IBIW the week before so I was glad that I got the chance to work with him he definitely showed me a lot and done a lot for me while I was in Florida, I also got the chance to get some great feedback at AWE from guys like Wes Briscoe and Jessie Neil, Going to the states gave me a boot up the arse and showed me that it is possible to get on these shows so hopefully I’ll be back at AWE and IBIW.

You’re part of the 5 Star Wrestling tour coming up which will be live on Freesports. With such names as Rob Van Dam, Jack Swagger, John Morrison and Rey Mysterio scheduled to appear are there any dream matches that you’d want to tick off during the tour? Personally, you versus Rey Mysterio in some form has to up there as a dream match.

I couldn’t be more excited to be part of 5 Star right now, Zack Gibson said it best at the press conference. This is a huge chance not only for me to showcase myself but for all of the UK talent involved to showcase British wrestling to both a national and international audience. On top of that there will be some of the best wrestlers from all over the world, obviously it would be a personal dream match for me to be able to work with Rey Mysterio it’s not often your in a situation where you could potentially work with a legend so it’s definitely something I hope to be able to do during the tour but I’m excited for the whole thing as a whole. The tours going to bring a lot of challenges for me but I’m looking forward to it I’m being put in a totally new environment, this will not only be my first time on live TV but it’ll be a chance for myself and The Fite Network to show that we can hang with some of the very best in the industry.

You’ve been working with the young talents at the PBW Academy, are there any prospects that people should be keeping an eye out for in 2018?

Everyone should 100% have there eye on Owen Jakks and Logan Smith, I’ve spoke a bit about them before but at 17 both lads have already popped up at various promotions in Scotland as well as making there Danish debut at Copenhagen Championship Wrestling and they’ve impressed anywhere they’ve went so I reckon 2018 is gonna be a big year for the pair of them. Prince Asad also made a lot of debuts last year including working in The Netherlands and I expect there to be a lot more of that this year, Angel Haze and Ashley Vega have impressed various promoters across Scotland and England and Dylan Angel has already showed a number of times he has the potential to be one of the best cruiserweights in the country. It’s a great time to be a trainee in the UK wrestling scene especially at the PBW academy I’ve only mentioned a few but there’s a number of guys there who have the potential to break out and if anyone is interested in learning along side them there’s the Barrhead Academy run by Kid Fite and the Airdrie Academy run by TJ Rage.

Back in April 2014 when we interviewed you and asked where you’d like to be in 5 years time, you wanted to wrestle in England and break into Europe, something you’ve certainly done. What’s the next goal for Lou King Sharp?

I’ve been extremely lucky being able to travel and work within Europe as often and in as many places as I have but there is still a lot left for me to do and a lot of places Id like to work, I’d love to be able to get back out to the states again and should the chance present its self I’d love to be able to work in Asia especially now that there’s a lot more promotions popping up in places like Malaysia, Singapore etc. Overall I want to be able to experience as much of the wrestling business as possible be that through traveling or through performing for promotions in UK and just to better myself as a performer in general.

If folk want to keep up to date with Lou King Sharp or just want to buy some sweet merch, where can we find you on social media and the like?

And finally, who is YOUR mother’s favourite wrestler? 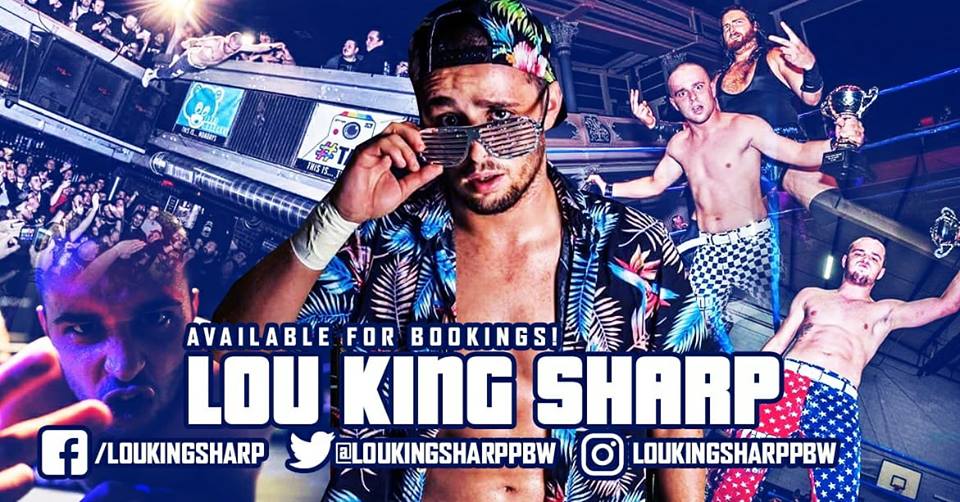 Our thanks goes to Lou for taking part in our OSWtv Meets series.