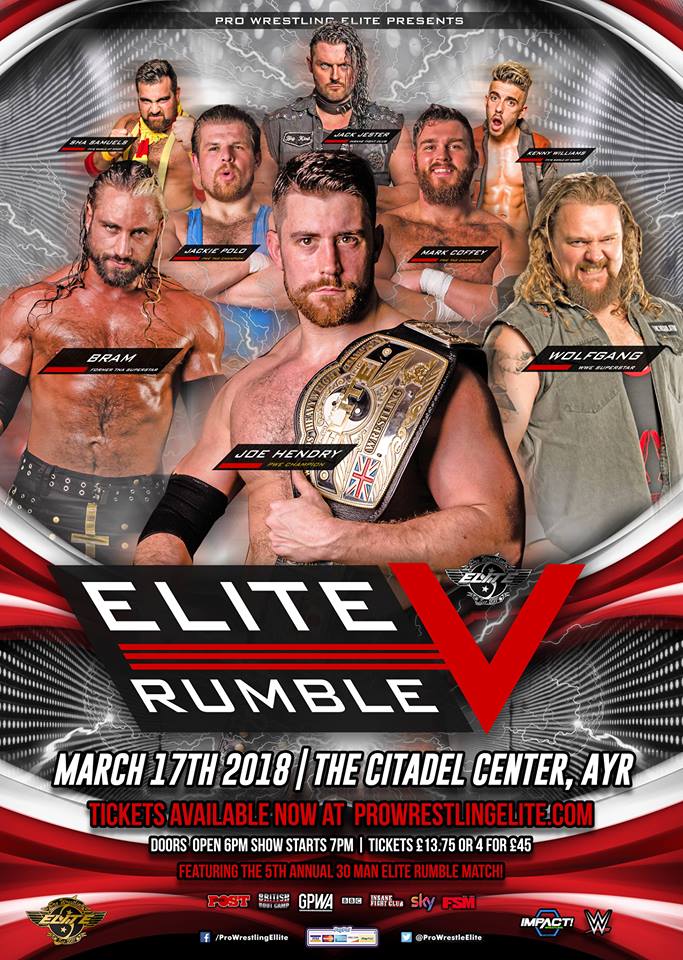 Pro Wrestling Elite are back at The Citadel in Ayr this Saturday night for their first event of 2018, Elite Rumble V. The Elite Rumble is always an eventful night on the PWE calendar, most notably in the Elite Rumble Match itself. With the calibre of stars involved in this year’s contest, who knows who could win!

The main event for the evening will see the 5th annual Elite Rumble Match. This year’s contest has an absolutely star-studded lineup featuring some of the best, along with some of the fastest rising stars. With the quality of star power making up the 30-man field this year, here are my five picks to win it all;

The Oddity has been on fire over the past 12 months. Undisputed ICW Champion, RCW Champion over in Spain, RNW Tag Team Champion, BT Gunn has been doing it all recently. A surefire contender to win this year’s Elite Rumble Match.

Andy Wild has rejuvenated his career over the last 2 years. With returns and debuts all over the UK, the Unstoppable Englishman was also part of a recent WWE tryout. With the strength and power he possesses, you can imagine he’ll be tossing bodies all over the ring.

Perhaps the best in the UK at the moment, Stevie Boy has also been capturing titles left, right and centre, whether it’s in PBW, BCW or RNW. After being victorious in last month’s ICW Square Go! Match, Stevie’s untouchable at the moment.

Perhaps one of the underdogs in the match, Kenny Williams has been having plenty of success recently. From facing Japan’s KUSHIDA in a dream match to getting a pinfall over Rey Mysterio, The Bollocks is someone that doesn’t usually have much success in Rumble-style matches. Here’s to him changing it up this weekend.

Big Kink has been one of the biggest names in the UK for some time now. Having been on the go since 2003 (according to Cagematch), Jester is known for going to any means necessary to get the job done. Don’t be surprised if he uses these tactics to come out on top in the Rumble. 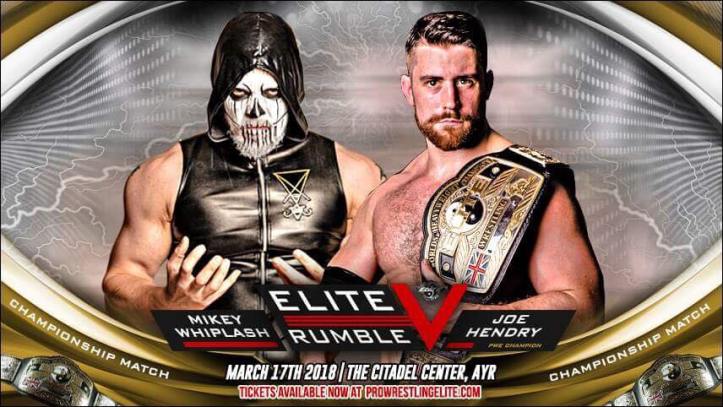 The PWE Heavyweight Championship will be on the line this Saturday as “The Prestigious One” Joe Hendry defend the gold against Mikey Whiplash. Hendry became champion at last year’s Elite Rumble, defeating Iestyn Rees after cashing in his Money in the Bank contract. Since then, Hendry has been retaining the gold against the likes of Joe Coffey and Kenny Williams. After becoming prestigious, Hendry has had a phenomenal run, including recently qualifying for next month’s Commonwealth Games in Australia. His first challenger of 2018 will be the devious Mikey Whiplash. 2017 was a relatively good year for The Necromancer, showing just how insane he’s willing to go. Expect this to be full of technical offence from both champion and challenger.

The Tag Team Championships will also be on the line, as Polo Promotions put the gold on the line against Adam Maxted and Charlie Sterling, known collectively as Max Money. After winning the gold from The UK Hooligans at night 2 of last year’s 6th Anniversary event, Polo and Coffey have retained the gold on two separate occasions against The Filthy Generation’s Stevie Boy and Lewis Girvan and then against the team of Bram and Sha Samuels. Their third challenge comes in the form of Adam Maxted and Charlie Sterling, a team who first came together in 5 Star Wrestling (as far as I’m aware). Maxted and Sterling became the inaugural 5 Star Tag Team Champions on the second live show, before retaining against The UK Hooligans the following week. Will we see them put another set of tag titles around their waists at The Elite Rumble? 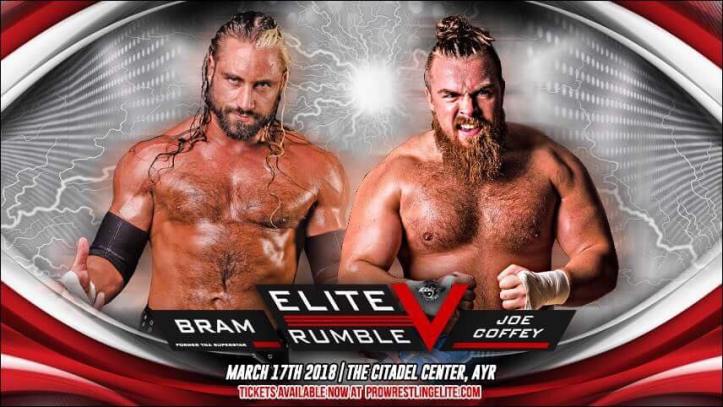 A singles match between two of the UK’s biggest names will see Bram take on last year’s Elite Rumble in the form of Joe Coffey. After coming out on top in last year’s Elite Rumble, The Iron Man defeated Charlie Sterling then won a Four Way Match over Chris Renfrew, Jack Jester and Rockstar Spud before being unsuccessful against Joe Hendry with the Heavyweight Championship on the line at the 6th Anniversary show. With all that behind him, Coffey will need to win the Rumble for the second year in a row but first, he has to defeat Bram. The King of All Evil has been making a name for himself as one of the most hated men in wrestling. Although he hasn’t had the best of luck in a PWE ring, 2018 could be a great year for Bram in Pro Wrestling Elite. 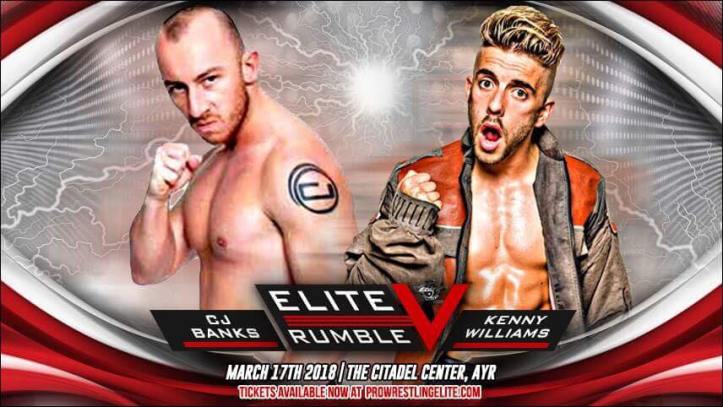 The last match announced for Saturday’s show will see CJ Banks return to PWE to face Kenny Williams. Both men appeared at the World of Sport show at the end of 2016, where Kenny was victorious in a 4 Way Ladder Match. Banks hasn’t had much success in Scotland, losing to the likes of BT Gunn, Lou King Sharp, DCT and Ian Ambrose. Kenny Williams, as mentioned earlier, has had lots of success as of late. 2017 for Kenny in PWE saw him facing some huge names, including Andy Wild, Joe Hendry and WWE United Kingdom Champion Pete Dunne. This could be a great showcase match for both men ahead of the main event.

Tickets are no longer available online, however fans can pay at the door on the night. Doors open at 6:30, with the action kicking off at 7pm.