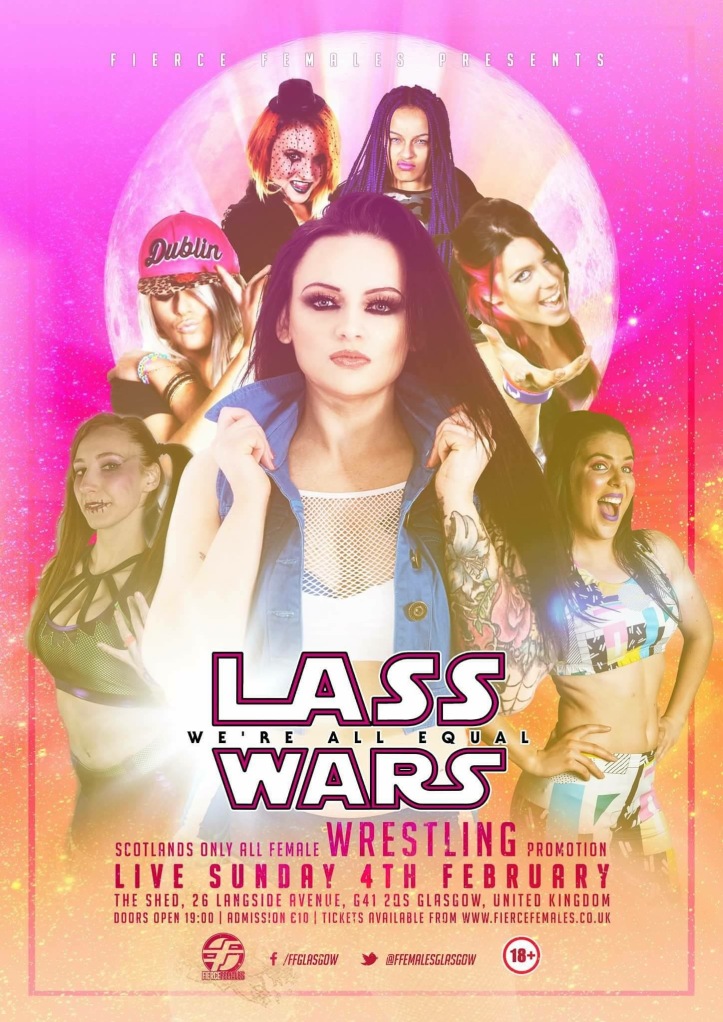 Fierce Females hailed from The Shed in Glasgow on February 4th. Following the success of ‘Don’t Call This A Comeback’ (reviewed here), Fierce Females once again offered a packed line up with some of the best wrestlers in the country.

They’ve put the full show up on the YouTube now, so let’s take a look at Lass Wars…

Kasey looked to have the match won early with a crossbody but Sammi soon turned the tide. Kasey was the hot favourite at The Shed while Sammi used any shortcut and little dig to keep on top. Kasey fought back, targeting Sammi’s arm first with an arm trap over the top ropes before locking a cross armbreaker that Baynz somehow dragged herself to the bottom rope to break. Baynz looked to have it won with a Sky High but Kasey kicked out. Baynz attempted a powerbomb but was rolled up by Kasey for the win.

Nothing too bad here, about 6 minutes of action. I feel that Sammi Baynz, with her attire and overall appearance, looks similar to Viper maybe with a slight hybrid of a Dave Mastiff. The only problem is I don’t think she commanded the crowd as well as Viper can whether she wants them to cheer or boo. That could have been down to the time given in fairness.

The crowd needed warmed up and a Kasey win did just that.

Hot off the gates, rather balanced in the early going but Lana looked to pick up a head of steam with a Peach Punch. Jokey dropped Lana onto the ring apron to take over. Jokey slapped on some great submissions including an elevated Billy Goat’s Curse and a Tarantula type move in the corner (I apologise for butchering the name of these holds). Lana escaped a modified Torture Rack but Jokey hit a springboard bulldog. Lana struggled out of an single leg and avoided a corner rush, getting a close two count from a straight kick to the head. Jokey pulled referee Sean McLaughlin into the path of a running Lana which only saw him land in perfect position for Lana to run up and hit Poetry In Motion. A Jokey spear wasn’t enough as Lana dealt the final blow with a DDT to win.

I like these two, Lana Austin just has an aura that makes you enjoy watching what she does, her passion translates through the screen. I enjoyed Jokey’s submissions even though I couldn’t name or barely describe them. A fun match.

A bit of wrestling started this one with a wristlock being traded before Rhio decided to lay in a straight forearm. Charli broke out some hard kicks to send Rhio reeling. Rhio evaded a corner rush and took over by punshing Charli with headlocks and pulling the hair, cutting off a comeback with a spinning heel kick. Evans fought back again, landing a crossbody from the top rope for a close two count. Rhio snuck in a sit out pumphandle slam but couldn’t put Charli away. An attempted fisherman’s buster was stopped with an arm trapped flatliner for the win.

From what I remember I wasn’t impressed by Rhio in her previous outing in Fierce Females but she showed a bit more character in this one. Charli Evans is a little firecracker that kept fighting back. Solid encounter.

Shax was vicious in her opening attack, drop kicking Morgan onto the shin before adding some corner punches. Morgan caught Shax on the backfoot but Shax was soon back to punishing Morgan. Charlie flapjacked Shaz onto the top rope to create some space as they traded forearms and chops on their knees. Morgan took Shax on a trip to suplex city with two German suplexes but her kick to finish it off was dodged as Shax landed a knee to the back of the head of Charlie Morgan. Shax hit a great monkey flip, springboard, tornado DDT combination which was fantastic but still couldn’t put Charlie away. Morgan hit a straight kick to the face of Shax but her follow up springboard splash was met by the knees of Shax. A double arm DDT later and Shax picked up the win.

This was the first time I had seen Charlie Morgan wrestle. She didn’t mess about with plenty of great moves. Shax provided a great foil and that monkey flip…thing was outstanding. One of the best matches on the this show.

Ayesha Raymond overpowered Leah in the opening exchanges but Leah relied on speed to try and chop down the big tree. Though she was successful it wasn’t long before Ayesha was ragdolling Leah about. Leah attempted picking up the amazon Ayesha with no luck as Raymond once again battered her with forearm clubs and boots before throwing Leah with a fallaway slam. A rebound snap German suplex wasn’t enough for Raymond to finish Leah. The two traded chops as Leah ‘Hulked Up’ (can’t think of a Leah Owens equivilant), picking up Ayesha for a sidewalk slam. Raymond picked up Leah with ease for a chokebomb spinebuster that was only saved by a rope break. Leah avoided a second attempt with a Paul Smackage inspired small package.

I’m really enjoying Leah Owens, I’d put her in the same akin of a Grado in Fierce Females, has a bit of a laugh and doesn’t take herself too seriously, bit of a chancer. A nice polar opposite as Ayesha Raymond is big and scary. Really enjoyed Leah Owens especially in this one.

Hayden attacked before the bell, looking to finish the match early. Sammie wasn’t having any of it as she used a springboard wristlock armdrag to even the score. Hayden bailed to the outside and suckered Sammie in for another attack. Emily soon lost the circle game which earned her a punch in the arm. It wasn’t enough to turn the match as Hayden threw her with a snap suplex. Sammie found an opening and locked in a octopus stretch but Hayden backed her into the corner. They traded offense for a bit longer with Hayden hitting a rope hung facebuster that could only get a two count. Sammie attempted a handspring cutter but was caught, turned and planted with a Twist of Fate for the three.

Good start, solid middle but the match started to fall apart at the end with stalling and stumbling.

Another pre-bell attack as Dark kicked Molly before she entered the ring, using the outside environment to smash her trusty kendo stick over Molly’s back, front and backside. Molly rolled into the ring but was soon back out as they fought by the bar area, through the crowd and through a door before Molly threw Jayla over a barrier, into the ring and to finally restore some order and get the bell rung.

Two bruisers going at it, a Dark backhand was returned with a Spartan headbutt. Spartan lifted Dark for a sit out powerbomb but could only get a near fall. More strong clotheslines and punches traded before Jayla Dark finished Molly with a Rocker Dropper.

Quick and chaotic. A wild brawl that ended swiftly in the ring. It was effective. Jayla has been dispatching opponents in record time since the change of mindset and I for one am loving it.

Some nice counters and trades with a wristlock to start off with before we got into the meat of the match. Lana countered a backslide into a roll up of her own for a close two count. Kasey turned into the aggressor, targeting the arm of Lana to set up for an armbreaker. The match spilled to the outside where Kasey swung Lana head first into the ringside barrier. A handy rope break saw Lana escape an armbreaker but Kasey kept aiming for the arm of Austin. Kasey got cocky and attempted a Peach Punch but was rolled up for two. Kasey’s attempt at a top rope German suplex was blocked as Lana hit a loud kick to the face and a Russian leg sweep for a two count. Kasey missed from the top but kicked out of the follow up short DDT from Lana. Kasey looked to finish Lana with a fireman’s carry neckbreaker which connected but her follow up knee to the face was ducked with a roll up from Lana for the win.

A really enjoyable main event between two really formed wrestlers. Had some fun moments and Lana was fantastic in her role as the underdog against a more aggressive, and possibly unhinged, Kasey. The work done on the arm with Kasey attempting the armbreaker was great along with Lana fighting back. A worthy main event to a fun show.

A brisk 70 minutes of wrestling. A lot of matches crammed in which had a bit of everything. A little comedy from Leah Owens, some great wrestling from Charli Evans, Charlie Morgan and others. some raw power from Ayesha Raymond plus a little chaos from Molly Spartan and Jayla Dark. The main event was highly enjoyable with Kasey and Lana being the MVPs of this show, not just because they both wrestled twice but they also put on the best matches. I don’t do any ‘awards’ on reviews but if I did then that monkey flip-spingboard-DDT from Shax would’ve been move of the night.