Preview: WrestleZone ‘Battle of the Nations 2018’

For the second time this year, WrestleZone are at Aberdeen’s Northern Hotel for Battle of the Nations 2018. Once again, management have packed the card with a whole host of fantastic matches, as well as featuring the debuts of two graduates from the WrestleZone Training Academy and the returns of Grado and Bingo Ballance! 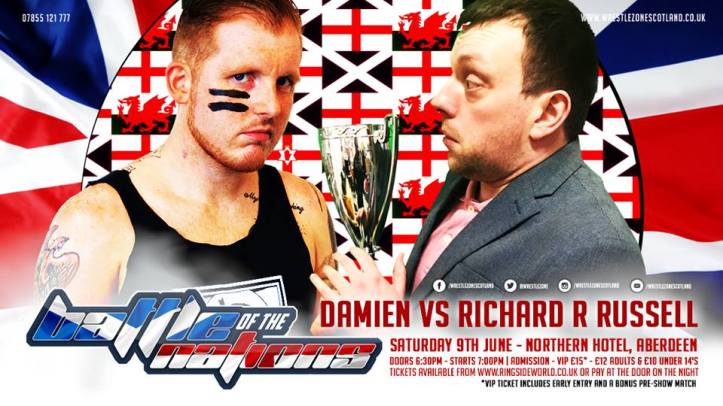 #1 Contenders Match
If Russell wins, he will be the General Manager at Aberdeen Anarchy X
Damien vs Richard R. Russell

The match that everyone has been waiting to see will finally happen on Saturday as Damien once again has an opportunity to get a crack at the Undisputed Championship in the main event of Aberdeen Anarchy X, but only if he can defeat 2018 Regal Rumble winner Richard R. Russell first. It was of course at last year’s Battle of the Nations where Damien turned his back on Sterling Oil in style, delivering a devastating superkick to the jaw of Shawn Johnson. Since then, it’s been a rocky road for Damien. He’s became a two-time Undisputed Champion in a moment that took the roof off the venue, only to be screwed out of the gold by Russell at the start of the year. This caused Russell to forced in to the Regal Rumble Match by management, but to their shock he came out on top with help from Shawn. Chris McDonald is having none of it though, and has signed this match to happen! Russell has agreed to it on the terms that if he wins, he gets to be the General Manager at Aberdeen Anarchy. It’s one of the most important matches in WrestleZone history, and has one of the most well-developed stories in wrestling today. A match not to be missed!

Another match with Aberdeen Anarchy implications will take place, as Zach Dynamite, Jason Reed, and Mr P square off with a shot at Andy Wild’s Tri-Counties Championship up for grabs. This was originally set to be a title match, but Andy Wild is unable to compete so Jason Reed will take his place and it will instead be a #1 contenders match. Take nothing away from Jason as he’s a terrific talent in his own right, but watching Andy toss other humans about the ring is satisfying to watch so I’m bummed to hear that that he won’t be there on Saturday. Although Andy Wild vs Mr P is something we saw a lot of in 2017, but the two have such good chemistry with each other that their matches get greater every time. The one man we’re failing to mention here is Zach Dynamite. Since his return from lingering injuries in the summer of 2016, Fully Loaded won his first taste of gold last November as he became the second Tri-Counties Champion in history. Any of these men would make for a tantalising challenger at the Beach Ballroom; for once, I’m praying we get a draw so they all go forward! 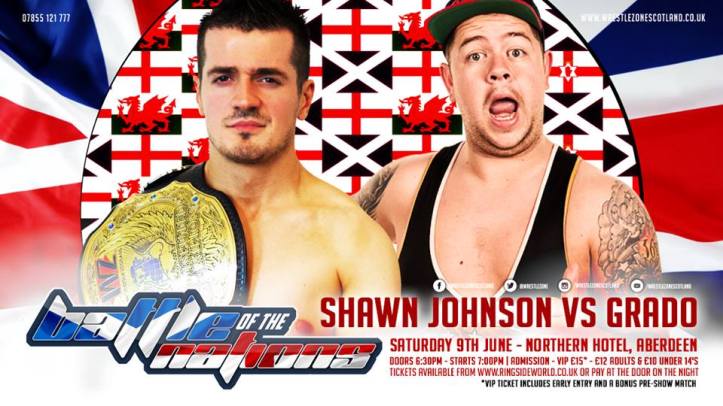 Undisputed Champion Shawn Johnson has a tough night ahead as he faces Grado, a man making his return to The Granite City, in non-title action. Shawn has been on terrific form since joining Sterling Oil at the end of 2015, enjoying two reigns as Undisputed Champion, a win in the 2017 Regal Rumble, and stepping in for William Sterling as a Tag Team Champion. After a brief absence from the ring, the former Granite City Hotshot returned to action in Ellon, and now finds himself across the ring from Grado. The Cheeky Wee Chancer Fae The Tap End Of Stevenson returns to Aberdeen for the first time since Summerhill Showdown, where he teamed with Mr P and Bryan Tucker to beat Nathan North and Shawn’s Sterling Oil comrades The Sterling Brothers. Although the title isn’t on the line in this showpiece contest, Shawn may need to prove himself here if he has any hope of impressing Richard R. Russell with Aberdeen Anarchy X just around the corner.

A colossal Triple Threat Match will take over The Northern Hotel as Proper Mental put the Tag Team Championships on the line against former champs The Rejected and two men who will be teaming for the first time in a WrestleZone ring, The Kings of Catch. Lou King Sharp and Krieger shocked the WrestleZone fans by winning the tag titles from Chris Archer and Mikkey Vago at March’s Regal Rumble event, but it’s what happened after the match that left fans speechless. Aspen Faith entered to assault the former champs and was joined by Lewis Girvan, with The Kings of Catch finally uniting in the north-east which was signified with an Apter Burner to Archer. WrestleZone’s tag division is booming at the minute; alongside The Sterling Brothers, these three duos are perfect examples of great tag team wrestling. Expect good things from this match!

If Sterling Oil win, they can accompany Richard R. Russell for his match with Damien
If they lose, they will all be barred from the building after this match
Bryan Tucker, Johnny Lions & Scotty Swift vs Sterling Oil (Crusher Craib & The Sterling Brothers (Alan Sterling & William Sterling))

While Damien vs Richard R. Russell is an important match, this six man tag has the potential to swing the momentum in favour of either man, depending on who comes away victorious. Six of the longest-serving members from the roster will go to war as Bryan Tucker, Johnny Lions, and Scotty Swift take on Crusher Craib and The Sterling Brothers with two unique stipulations on the line. Craib, Alan, and William will be allowed to accompany their adviser Richard R. Russell to ringside for his match against Damien later in the night but should they lose, they will be forced to leave The Northern Hotel for the rest of the night. There’s lots of history between these six men, including Johnny Lions once being aligned with The Sterling Brothers against Crusher Craib. Times have most certainly changed for the competitors involved and if things go the way I see it happening, they’ll be changing again. Read here to see what I’m on about! 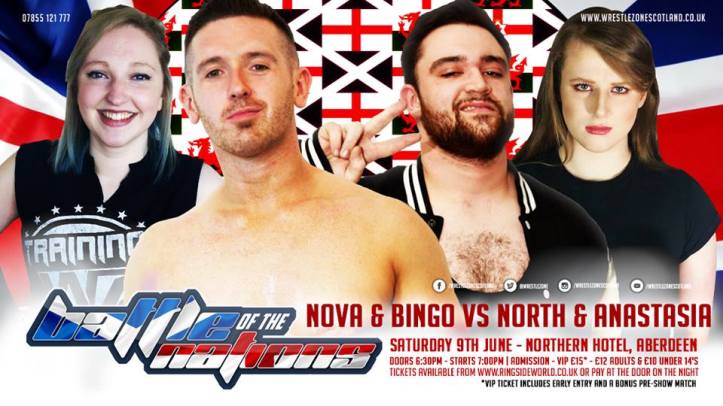 Following an injury to Sammii Jayne forced the scheduled match between her and the debuting Little Miss Roxxy to be cancelled, WrestleZone management were quick to react and signed an Intergender Match. Bingo Ballance returns to WrestleZone for the first time in nearly a year as he takes on “Vintage” Nathan North. Joining the pair in the match will be the latest graduates of the WrestleZone Training Academy, Nova Moore and Anastasia Hawthorne respectively. I could go on all day about how much I enjoy the work of Bingo and Nathan, but let’s take the time to speak about the newest additions to the roster. Nova has been in action on the recent gala shows, including winning the Granite City Comic-Con Intergalactic Championship Of The Universe And Space And Time (completely legitimate title belt), whereas this will be Anastasia’s first time in front of an audience. I’ve been hearing great things about her from Sammii Jayne, so let’s just wait and see what she has to offer.

For fans with VIP ticket holders, there will be a special Triple Threat Match before the main card gets underway. Bradley Evans, Kaden Garrick, and The Outfit’s Dino Del Monte will square off in a battle between three of my personal favourites from the WrestleZone Training Academy. Evans has been running through some of the competition in WrestleZone, with recent wins over William Sterling and Prince Asad, while former two-time Tag Team Champion Kaden Garrick recently returned to action as a surprise entrant in The Regal Rumble. These two have become two of the most recognisable faces in WrestleZone, but one of the more recent stars on the roster is Dino Del Monte. Since debuting in March, Dino has remained undefeated (bar the rather quick elimination in The Regal Rumble at the hands of Crusher Craib). WrestleZone’s resident gangster will likely have his associate Ted O’Keefe at ringside here, which play a pivotal part in the outcome of this match.

WrestleZone management will be on hand at the show to make two very special announcements regarding Aberdeen Anarchy X on September 1st. The first of those announcements will see the second former WWE superstar unveiled for the Beach Ballroom supershow! 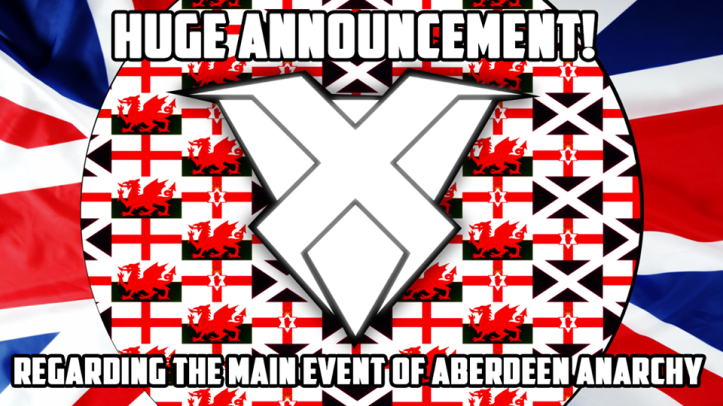 Management will also be making a special announcement about the main event of the upcoming supershow. Be the first to find out what they have to say by coming along to the show!

Tickets can still be bought from www.ringsideworld.co.uk, priced £15 for VIP, £12 for adults general admission, and £10 for under 14s. Fans can also pay at the door on the night. Doors for VIP ticket holders open at 6pm, where they will be treated to a special pre-show match, before general admission doors open at 6:30 for a start time of 7pm!