WrestleZone Battle of the Nations 2018 – The Talking Points

Another eventful night has gone down in the WrestleZone history books, as they presented the 2018 Battle of the Nations from Aberdeen’s Northern Hotel last night. From training academy debuts to one of the most anticipated matches in history, there was a LOT that happened. Reviews will follow in the coming days, but for now here are a few talking points as the road to Aberdeen Anarchy X is now in full swing!

Following the results of two matches with Damien defeating Richard R. Russell and Shawn Johnson retaining the Undisputed Championship against Grado, the main event has been officially signed for Aberdeen Anarchy X on September 1st. WrestleZone’s tenth anniversary will be main evented between Shawn defending against Damien in the first ever Steel Cage Match in WZ history and if that wasn’t big enough, professional boxer “The Aberdeen Assassin” Lee McAllister will be the ringside enforcer. Get your tickets while they’re still available, this is one not to be missed!

Chavo Guerrero Is Coming For Anarchy

After Santino Marella was announced for Aberdeen Anarchy X at The Regal Rumble, management representative Chris McDonald revealed the second former WWE superstar for the huge event. Coming to Aberdeen is none other than former WWE, WCW, and Impact Wrestling star Chavo Guerrero! The nephew of the legendary Eddie Guerrero will be in action at the historic Beach Ballroom on September 1st. 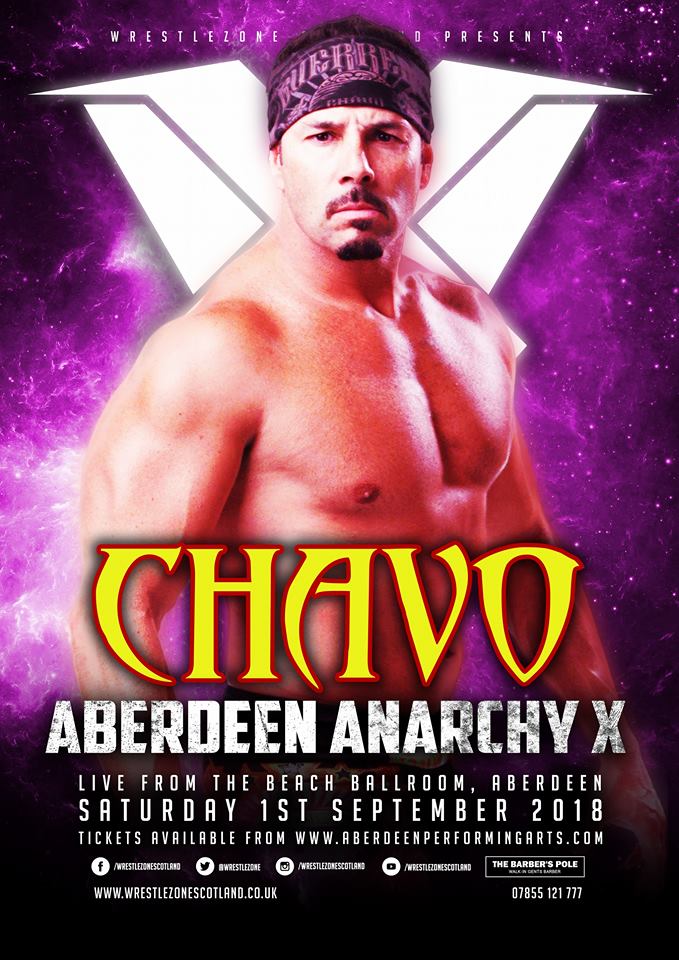 The members of Sterling Oil were involved in three separate matches at this year’s Battle of the Nations. The first of those featured Crusher Craib and The Sterling Brothers, as the trio faced Scotty Swift, Johnny Lions, and Bryan Tucker. A loss here meant they were banned from ringside in Richard R. Russell’s match with Damien, signified by security escorting William and Alan from the building. In Russell’s match with former ally Damien, he was pinned following two huge superkicks. The only Sterling Oil member to be victorious was Shawn Johnson, who retained the Undisputed Championship against Grado in the evening’s main event, albeit with the help of former tag champs Lou King Sharp and Krieger.

The penultimate match of the night saw Proper Mental defending the Tag Team Championships against The Rejected and The Kings of Catch in a Triple Threat Match. After some sexy dancing some vicious double team moves from Aspen and Lewis, it was Chris Archer and Mikkey Vago that walked away with the gold for the fourth time in their careers by surprising Sharp and Krieger with a pair of rollups.

Due to Andy Wild’s absence from the show, a Triple Threat Match was made between Mr P, Jason Reed, and Zach Dynamite to determine Andy’s challenger for Aberdeen Anarchy X. As the time limit neared its end, “Vintage” Nathan North entered and assaulted both P and Dynamite with a steel chair. North stated that he would make the Tri-Counties Championship vintage. WrestleZone have promised that Nathan will explain his actions later this week.

Due to Sammii Jayne being unable to compete after suffering an injury, her scheduled match with Little Miss Roxxy was cancelled and its place was an Intergender Match featuring two debuts from the WrestleZone Training Academy. Nova Moore teamed with the returning Bingo Ballance and was victorious over Anastasia Hawthorne, who was paired with Nathan North. I was highly impressed by both Moore and Hawthorne, and look forward to seeing more of their work in the months that follow.

One of the most exciting nights in WrestleZone history that will surely be remembered for a long time to come. The road to Aberdeen Anarchy X has officially begun; there couldn’t be a better time to be a fan of WrestleZone!