The post-Aberdeen Anarchy blues have settled in, but there’s no rest for the stars as they return to Brechin’s City Hall on Saturday night. With new Undisputed and Tri-Counties Champions crowned and an air of relief with Sterling Oil forced to disband, a new era of WrestleZone is beginning. Who will step up to the plate and make a name for themselves as 2018 winds down to its final months?

Damien finally accomplished his mission of taking the Undisputed Championship back from Sterling Oil, besting Shawn Johnson in an outstanding Steel Cage Match at the Beach Ballroom. WrestleZone management haven’t been too kind to him with his first defence though, putting him in there with three of the most successful wrestlers in WrestleZone history. Andy Wild is a man who has had mixed success in Fatal Four Way Matches, winning and losing the Tri-Counties Championship in that environment. You could expect to see some teaming up during the bout between former Revolution partners Damien and Johnny Lions but at the end of the day, only one man can walk out of Brechin with the championship held proudly over their shoulder.

Zach Dynamite stayed true to his word at Aberdeen Anarchy X, becoming a two-time Tri-Counties Champion, albeit with the help of Bradley Evans as those two realigned. After outsmarting the other three competitors in the match with his full-proof plan, Zach once again finds himself sat atop the Tri-Counties division. One man that isn’t too pleased with Dynamite’s way of victory is Scotty Swift. The Red Haired Warrior is furious that Bradley Evans, a man he had a hand in training, would do such a thing to Mr P. As a result, he is taking it in to his own hands to get some retribution on Zach. Should he win, he would also become the first Triple Crown Champion in WrestleZone history. A lot to fight for in Brechin.

Speaking of Bradley Evans, he’ll be in action for the first time since he turned his back on the fans when he faces Mikkey Vago. Evans hasn’t had the best of days in 2018 thus far, finding himself at the bottom of the pile waving a flag in Mr P’s corner. Since Dynamite turned on him away back in January, he hadn’t been doing anything really. This is something that could push him right up the card. Mikkey Vago was also in action at the Beach Ballroom, retaining the Tag Team Championships over The Kings of Catch. With Evans once again teaming with Dynamite, it means The Rejected could have another set of challengers in the tag team division.

Aberdeen Anarchy X saw some huge victories for some of the competitors involved, but two of the biggest winners will now collide in Brechin as Bryan Tucker faces Jason Reed. Tucker was a part of Team WrestleZone as they headed in to battle to force Sterling Oil to disband, while Reed was victorious on the pre-show in a special Battle Royal. For the past few months, the cheeky chap from Fife has been eyeing up the WrestleZone roster to see who might be a threat in his quest to Make WrestleZone Great Again. The Battle Royal saw him defeat six homegrown WZ talent, although he did have a bit of help from Agent W. He’s been undefeated since adding the former Jeeves Winchester to his cabinet, but will his luck continue against one of the most accomplished athletes in WrestleZone history?

The Tag Team Championship division already has some top quality teams, which will be shown on Saturday when The Outfit’s Dino Del Monte goes up against Vago’s partner Chris Archer. The Outfit and The Rejected are no strangers to each other, with the two sides being 1-1 in tag action after Del Monte and Ted O’Keefe gained an upset victory in Turriff before failing in a title match in Inverurie. Archer and Vago have took out all comers to their gold but with the rate The Outfit have been improving, I wouldn’t be surprised to see them be the pair to end their reign. 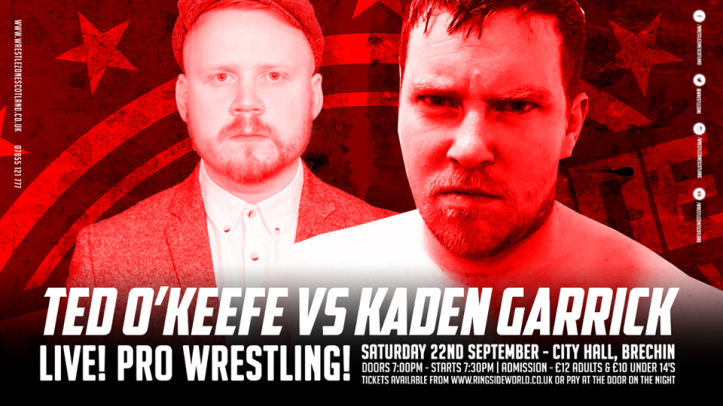 The other half of The Outfit will also be in singles action as Ted O’Keefe goes one on one with Kaden Garrick. O’Keefe is, in my opinion, a darkhorse in WrestleZone. When the gangsters first came to WrestleZone this past March, the focus seemed to be more on Dino but Ted impressed me just a slight bit more. They’ve just got unique characters which is always a nice thing. The night they arrived was also the night Kaden Garrick made his return from injury and while he hasn’t been doing too much since his comeback, this could propel him in to the Tri-Counties Championship scene. Garrick vs Dynamite sounds like it would be class.

Tickets are of course available from www.ringsideworld.co.uk, priced at £12 for adults, £10 for under 14s, and an online-exclusive family of four ticket for £35. Fans can pay at the door upon entry. Doors open at 7pm, with the first match kicking off at 7:30.