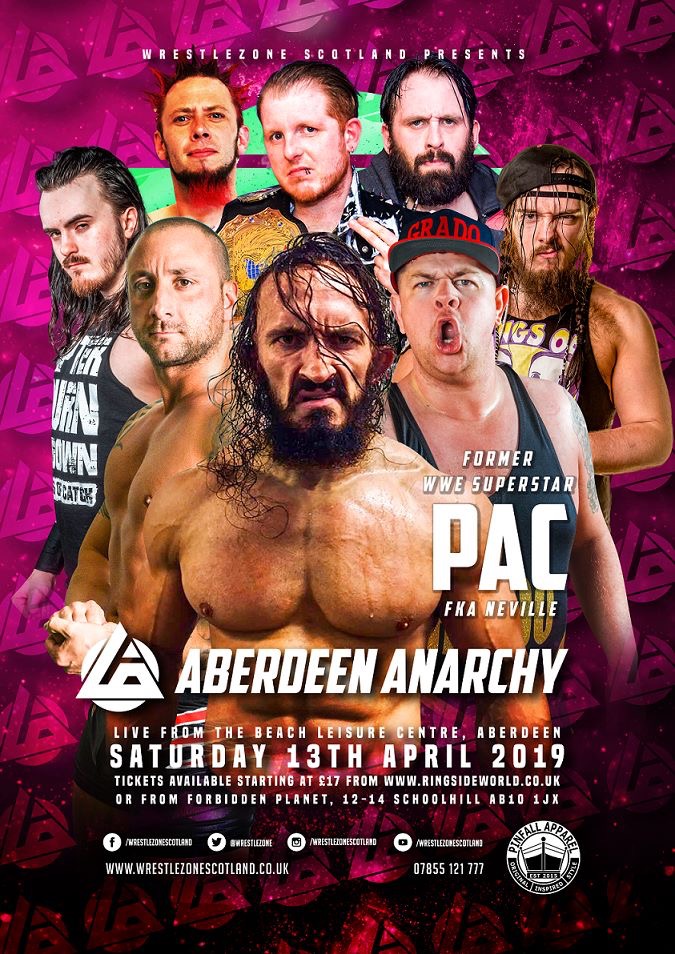 The official poster (produced by Bearhug Design) for WrestleZone’s annual supershow Aberdeen Anarchy has been released so it’s a perfect time to get the mind racing on possible matches on the card. So let’s throw some out there!

Unless the dreams of Bryan Tucker joining the dark side come to fruition before Aberdeen Anarchy I don’t see him having a match on the main show. So until then he’s in the VIP ticket holders match, teaming with Kaden Garrick to face The Outfit.

These three teams look to be on a collision course for Aberdeen Anarchy. I’m thinking there will be a stipulation involved, with Johnny Lions recently stating that he’d love to be in a steel cage match I’m thinking Lions will be gunning to throw that into the mix, it’s that or a tables match.

The match may finally happen in WrestleZone. Sammii has had Viper to contend with the last few years and, although it would still produce a great match, it would be nice to see a fresh face to come up against the Queen of WrestleZone. We’ve been so close to seeing these together clash twice now, third time lucky?

Grado’s road to Aberdeen Anarchy usually starts at the Regal Rumble and usually involves one of the other guests but I can’t see him being involved with PAC this year. I can see Zach Dynamite being the reason Grado doesn’t win the Regal Rumble leading to this one. Ryan Riley is added to this through disappointment of not facing PAC after plenty lobbying for the match with ‘The Man Gravity Forgot’, Riley wants his Aberdeen Anarchy moment and wants Grado. Grado needs partners and The Rejected would be perfect back up, maybe they’ll get Grado a leather jacket for the occasion…

I’m not sure if there is a way to hang the belt above the ring at The Beach Leisure Centre but if there is then a big six way ladder match between several WrestleZone stars over the Tri-Counties Championship sounds like fun. There’s plenty feuds coming into this which I couldn’t fit in to have singles matches so putting them all together into one match sorts all of that. You’d have the outside contingent with Agent W and Caleb Valhalla mulling about while six of the best fight over the title. Sounds like fun. If not a ladder match then a six pack challenge would be just as enjoyable.

With Lionheart confirmed for Aberdeen Anarchy this was the first match that sprung to mind which threw out all my predictions prior to today. PAC versus a veteran like Lionheart is guaranteed to be a match of the night contender.

The more I think about it, the more this makes sense. There’s plenty of story to drive this match to take place. The previous feud that lead to Aberdeen Anarchy before, Sterling Oil, Crusher’s redemption, it’s all there for a colossal Aberdeen Anarchy main event.

There we go, some guesses at matches coming to Aberdeen Anarchy on April 13th. Which matches would you like to see?

A ringside tickets gains you a guaranteed ringside seat, early entry to the show, exclusive meet and greet and bonus match.

Tickets are available online at http://www.ringsideworld.co.uk

Please note that ringside tickets are available online ONLY.