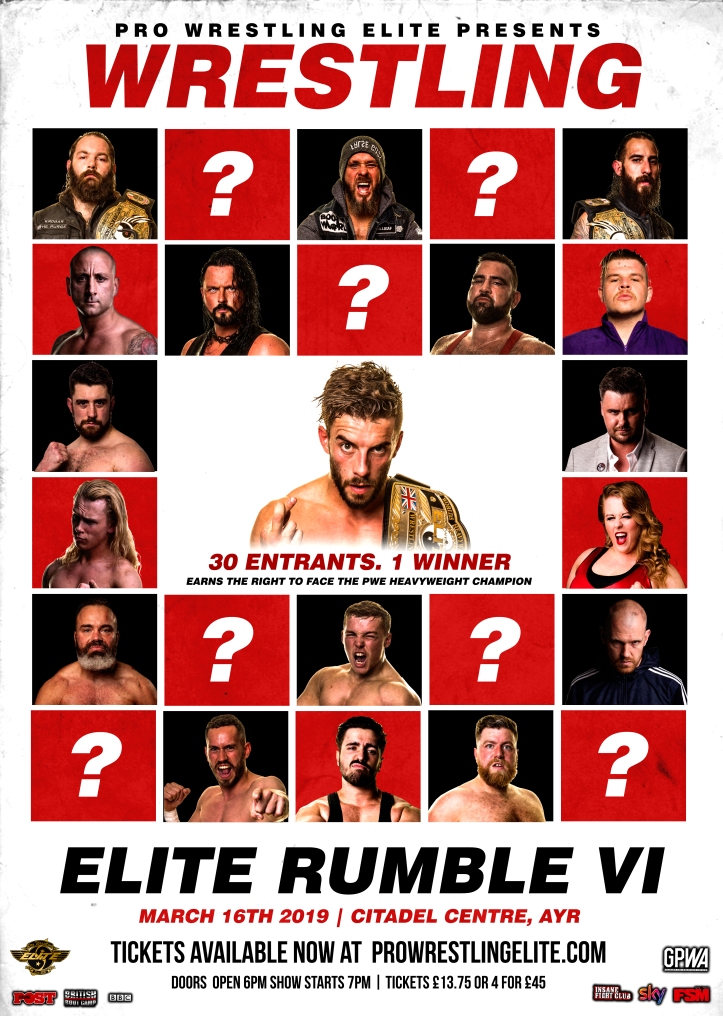 Us Scots are extremely lucky on Saturday evening, as we have not one but two Rumble Matches taking place. Madness! While we at SWN will be heading to the Aberdeen Northern Hotel for a Regal Rumble, there’s also the option to head to the Citadel in Ayr for an Elite Rumble. Pro Wrestling Elite have what looks to be a stacked card from top to bottom, with two title matches (one of which is an open challenge) and the main event, the big one, the grand finale. The sixth annual Elite Rumble Match. The match that could completely change the career of one PWE star. Last year so Kenny Williams come out on top and now, he’s heading into this year’s event as the PWE Heavyweight Champion. Could the same fate happen here?

The annual Elite Rumble Match will see 30 competitors enter the fray, all in the hopes of cementing their opportunity at the Heavyweight Championship at July’s 8th anniversary show. Previous winners include the likes of Grado, Noam Dar, and Joe Coffey. Who will go on to become the sixth winner? Here’s my five picks:

Jackie Polo – Following his loss to The Hurricane at last year’s anniversary show, it’s possible Jackie Polo’s Pro Wrestling Elite has been set back a bit. He’s an accomplished tag team wrestler up and down the UK of course, winning a total of eight tag team championships alongside his old Polo Promotions pal Mark Coffey, one of those being here in PWE. People often forget how great a singles wrestler he is as a result of that. Here’s some advice – don’t. My main pick to win the Rumble this year is indeed PWE’s beeeeeesssssstttttt wrestler!

Khifie West – The least experienced man in this mini Five Picks post, but certainly one that packs a punch. Coming out of the Glasgow Pro Wrestling Asylum, Khifie West is built like a block of flats. When he’s not in the ring, he’s competing in bodybuilding competitions. If that doesn’t say everything I need to say then I don’t know what will. The Human Freak is being managed by RUDO Lighting in PWE at the moment, something that has bode well for his career thus far. Could it lead him to elite status?

Liam Thomson – At last year’s Elite Rumble, we didn’t even know if Liam Thomson would be able to wrestle again. The Bad Boy has been with PWE from the very start, teaming with Carmel Jacob against Andy Wild and Kay Lee Ray on the debut show. Having returned to the promotion this past September, Thomson is in my mind one of the front runners to win the sixth rumble. That Heavyweight Championship sure would look lovely next to his sink…

BT Gunn – For the majority of his PWE career, BT Gunn has been a tag team wrestler alongside his old New Age Kliq ally Chris Renfrew. Following the dissolution of the team in Pro Wrestling Elite though, The Oddity now finds himself with a prime opportunity to boost his career right to top of the PWE mountain. His rumble appearance last year was ruined in short order when Renfrew dumped him from the ring but with Renfrew not being seen since losing to Gunn in July, this could very well be the year The Oddity claims the victory.

Last year’s Elite Rumble saw Kenny Williams walk away with the guaranteed Heavyweight Championship opportunity, a title he would go on to win from Joe Hendry last July. Since then, he’s already made successful championship defences against both Liam Thomson and fellow NXT UK star Wolfgang. He now faces the imposing challenge of Mark Coffey gunning for his championship. The Power Forward has mainly been a tag team wrestler in PWE but with Jackie Polo seemingly going on his own adventures, it leaves the Coffey brother without a partner to go for doubles gold. Maybe he’ll be the one to end Kenny’s fairytale. You can guarantee it’ll be a fantastic championship match no matter what!

Tag Team Champions The Purge won the titles at last year’s anniversary show, winning a four-team Gauntlet Match to lift their first set of tag team gold. Since then however, they’ve not even been in action, let alone defended the championships. Krobar and Stevie James have been demanding the competition, but PWE management haven’t been giving them what they want. As a result, they’ve issued an open challenge for the Elite Rumble. Which team will step up to challenge the bikers? Will it be an established tandem? Perhaps two guys coming together with the aim of winning some gold? The only way to find out is to head along to Ayr on Saturday night!

JAAAAACCCKKKIIIEEE! Jackie Polo, ladies and gentlemen. Just Justice, The Law Round These Parts, Nature’s Gift to Wrestling, Scotland’s beeeeeesssssstttttt wrestler. Whatever you want to call him, it’s a simple fact that the former Polo Promotions member is one of Scotland’s best. In PWE, he remains under his guise of scooping people up for slams instead of being the southerner we’ve come to love in ICW. He comes up against Aaron Echo, which I think may be their first singles match against one another? I’d need to search that one up but I’m almost certain. Both men could also be entering the Elite Rumble later on in the night, meaning they may look to beat lumps out of each other in this bout.

Women’s action sees Viper taking on Jokey in quite a clash of styles. The Vixen of Violence uses a power-based offence to demolish her opponents, a style that has garnered her plenty of success all over the world as both Viper and as Piper Niven. Meanwhile, The Twisted Priestess prefers to use strikes and her quickness to wear down her opposition, often in time for her to gain a submission victory. From what I’ve read online about the recent ICW show in Aberdeen on Sunday night, these two put on quite the encounter with Aivil coming out victorious to the surprise of many. Expect to see another clinic between the pair this weekend. 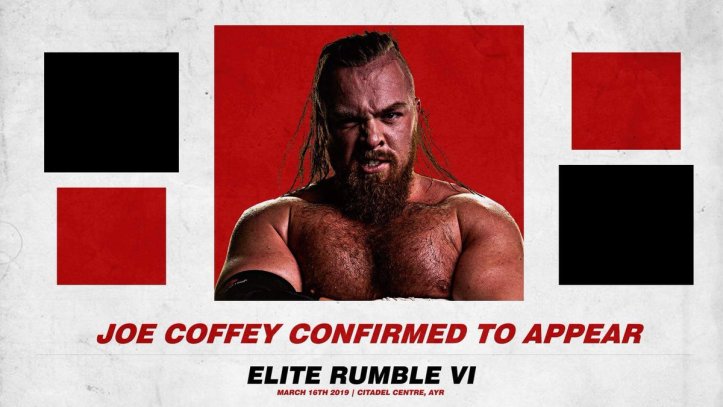 NXT UK star Joe Coffey will also be in attendance on Saturday. What does the future have in store for this former Elite Rumble winner?

As of writing, tickets are still available from http://www.prowrestlingelite.com, priced £13.75 for a general admission ticket and £45 for a group of four ticket.