With all the fallout from Battle of the Nations a few weeks ago, WrestleZone are set to return to Turriff’s Baden Powell Centre on Saturday night for another action-packed night of entertainment. All eyes are now firmly locked on next month’s Halloween Hijinx event, and with the Undisputed Championship match for that night already confirmed as Damien vs Austin Osiris, it’s now up to everyone else to leave their mark in the hopes of landing a place on that October 26th card.

Former Sterling Oil pals collide in the main event as Undisputed Champion Damien tangles with Alan Sterling, although the title won’t be on the line here. The Revolutionary had quite the night at Battle of the Nations, retaining his title against both Liam Thomson and Zach Dynamite in a fantastic Triple Threat Match, before he was ambushed by Austin Osiris. This resulted in Osiris issuing a title challenge to Damien for next month’s Halloween Hijinx event, a big money match (no pun intended) if there ever was one. Damien’s now got to ensure he makes it there in one piece, otherwise his title reign may be in jeopardy. Now, although Alan Sterling may not be all there these days, we have to keep in mind that he can be properly aggressive sometimes. Remember back to 2015 when he was busting out DDTs and lariats, and was a legitimate threat to the Undisputed Championship? Sure, that Alan is long gone now, but it’s now all about Alan. Right?

At Battle of the Nations, The Outfit had won the Tag Team Championships from Scotty Swift and Johnny Lions after using a set of brass knuckles brought into the ring by Ted O’Keefe. However, referee Denzil Law was made aware of this post-match, resulting in him restarting the match, allowing Swift and Lions to walk out of the Northern Hotel with the titles still around their waists. It’s a decision that hasn’t sat well with The Outfit, so Ted will be out for revenge as he faces The Red Haired Warrior in Turriff. Even though he had a hand in training Dino and Ted, Swift hasn’t taken too kindly to the attitude shown by the pair. No matter what he may think of them however, he’ll need to have eyes on the back of his head here – not only is Dino Del Monte also scheduled to be in the building, so are the new #1 contenders to the tag titles Blue Thunder and William Sterling. With Johnny Lions nowhere in sight, it’s looking like a rough night for the WrestleZone original.

Speaking of Blue Thunder, he’ll be in singles action at the Baden Powell Centre as gets set to face Mikkey Vago. The animosity between these two will be at an all-time high right now as, despite it not being his idea, Thunder technically robbed Vago and Rejected partner Chris Archer of a potential opportunity at the Tag Team Championships. Due to their scheduled match with The Granite City Hotshots not going ahead, the former Thunder Buddies sauntered out, with William Sterling demanding for them to be inserted into the tag titles #1 contenders bout between The Rejected and The Foundation of the Future. Blue Thunder may not agree with Sterling at times, but he’s now one step closer to where he wants to be – a champion. If you remember back to early 2015, these two waged war in the tag team division after The Heavy Metal Hooligan made his debut out of the WrestleZone Training Academy. Let’s see if they still have the same chemistry they had before.

A battle between two of the more recent training academy graduates will see Connor Inglis facing The Outfit’s Dino Del Monte. Ever since his arrival on the WrestleZone roster back in January, Connor has become one of the audience’s favourites, thanks in part to him taking the fight to Crusher Craib time and time again. After securing a huge victory over the former two-time Undisputed Champion at Battle of the Nations, the young upstart now has another tough challenge standing in front of him. Sure, Dino isn’t as big a challenge as The Creator of Carnage, but he’s still a challenge nonetheless, especially if Ted O’Keefe decides to strut out to ringside for him. All it takes is one of those rolling elbows to pin Connor’s shoulders to the mat for the count of three. 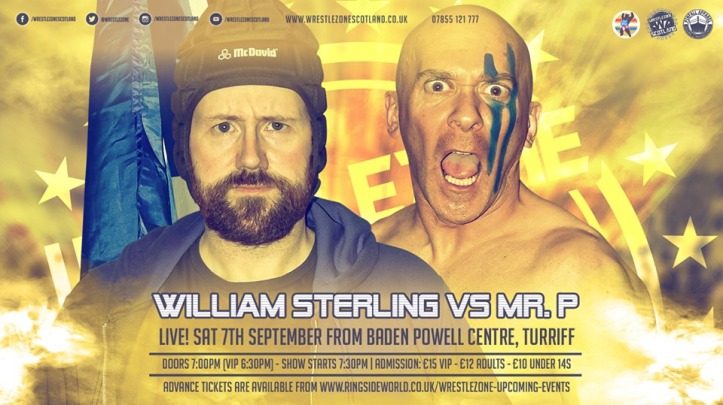 Mr P returns to action in Turriff as he takes on an old foe in the form of William Sterling. The story between these two goes back years, going back as far as the times when Mr P wasn’t even a wrestler but rather the management representative. During his time as a member of the board, P was always butting heads with the Sterling Oil lads, namely Richard R. Russell (because who hasn’t Russell gotten under the skin of?). Fast forward a few years to when Mr P had swapped the suit for a pair of wrestling tights, and had captured the Tag Team Championships with Kaden Garrick. Their second reign with those titles came to an end at Battle of the Nations 2016 at the hands of The Sterling Brothers, with Kaden’s undefeated streak also ending as a result as he was pinned by Alan Sterling. Both men are now at entirely different stages in their careers – William Sterling is once again partnered with Blue Thunder and is on the hunt for his 7th(!) run as a Tag Team Champion, whereas Mr P is coming off the back of a recent loss of the Tri-Counties Championship to Jason Reed. A must-win situation for the kilt-wearing sensation in Turriff.

As we all know, nothing in life is ever truly perfect, just like this card as Cysto is back once again. Thankfully though, The Tangerine Dream finds himself (or herself, it’s 2019) coming up against Caleb Valhalla. After being given the night off at Battle of the Nations, the Norse God is coming back to do what he does best – destroy everything. It’s a statement that Caleb lives and breathes by, and for good reason. Since being brought in as Alan Sterling’s personal bodyguard at last year’s Halloween Hijinx, Valhalla has demolished everyone that’s stood in front of him – Andy Wild, Umar Mohammed, Kaden Garrick, Lord Mr Malice, the list goes on. I’ll never get over what he did to Malice at the Regal Rumble. I can only Cysto gets the same treatment on Saturday.

A rematch from the Battle of the Nations pre-show will see Kaden Garrick again facing off with Mauler Murphy. The duo’s bout last month was a solid match, a great performance from both that ended in victorious fashion for Murphy. Murphy is a cracking big guy, and can toss his opponents to the other side of the ring in one swift motion. It’s reasons like this that make it that bit more enjoyable to see him facing these smaller wrestlers like Kaden Garrick. No matter how much of a powerhouse Kaden is at times, he’s a smaller guy in terms of stature, allowing him to be easily swatted away. He’s yet to pick up a win since Proving Grounds 2018 when he defeated the icon that is Lord Michael of Graham, which is his only win since returning from injury in the 2018 Regal Rumble Match. Will Turriff be the night that sees him put a tick in that win column?