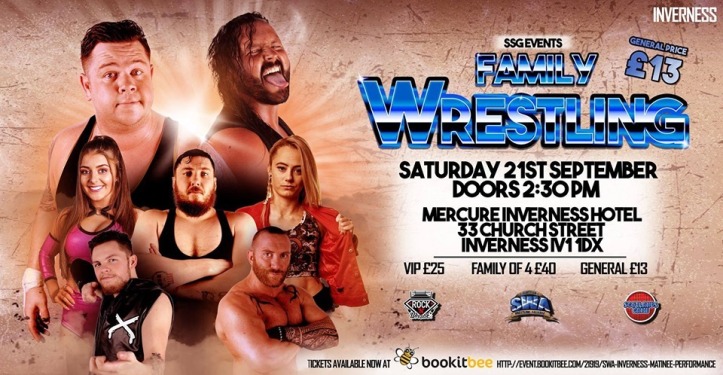 Scottish Wrestling Alliance return to Inverness on Saturday for their second event since taking over the Rock N Wrestle brand. Returning to the Mercure Hotel, many of Rock N Wrestle’s and SWA’s regular stars along with some of the upcoming talent in Scotland. They’ve put together a fantastic line up to showcase their talent.

Last time the VIP portion of the show was a bit chaotic, as was the queuing, so hopefully some of the problems have been worked out. The show was great fun though so surely that won’t be changing.

Scottish Wrestling Alliance are on the road to Lion’s Den, their re-branding of BattleZone, the over the top spectacular will have many wanting to pick up a win on route to Motherwell on November 23rd.

Kieran Kelly was SWA X Champion last time SWA were up in the Highland capital. He is still Tag Team Champion with Craig Anthony. Funnily enough his opponent defeated Anthony back in March, Timm Wylie.

I’ve often been unimpressed with the former SWA Heavyweight Champion in the past but Wylie’s match with Craig Anthony in March was a thoroughly entertaining watch. Wylie is a solid base for the more high flying opponent so this should be a really good match that certainly evokes the David vs Golaith classic contest. Kieran Kelly is one that has been constantly ascending, picking up big wins and grabbing opportunities left, right and centre, so a big win over Wylie will hopefully move him one step closer to Lion’s Den and potentially becoming a SWA Triple Crown winner, which would make him the first ever if my research is correct…

Grado was originally set to face Jack Jester for the Highland Championship but a schedule change sees him take on ‘Scudmaster Sexy’ Krieger. Grado defeated Kid Fite back in March so will be looking to defeat another member of The Fite Network in Inverness. Grado continues to be one of the most popular wrestlers in the country and the chance to see him up in the Highlands is always a treat. Krieger is a bundle of potential ready to burst and pinning Grado wouldn’t make him popular in the Mercure Hotel but would certainly cement any claim to a championship opportunity. Expect laughs and just pure entertainment of the finest.

Angel Hayze really impressed back in March, losing to Lucy Cole but showing that she will not back down. A scrapper for sure, she comes up against another new kid on the block in Rosie Nyte. Having heard about Rosie Nyte this should be a really great encounter. Hayze has been making the rounds with singles debuts in Discovery Wrestling, Insane Championship Wrestling and EVE. She’s certainly tipped as one to watch. Rosie Nyte is no slouch with a recent debut for Fierce Females, along with many trips to the North of England. Two that will be seen a lot more over the next couple of years around the UK. They faced off recently in Big Massive Wrestling and Angel Hayze picked up the win on that occasion. Two wrestlers that have very bright futures ahead of them and will no doubt be looking to go all out in the Highland capital.

Leyton Buzzard won the SWA X Championship against Kieran Kelly in a match that everyone in attendance was talking about back in May and has since been continuing the defenses across the country. He returns to SWA to take on former SWA Junior Heavyweight Champion Dickie Divers. Buzzard in another talent in Scotland that is certainly making a name for himself by putting on highly entertaining matches with anyone that steps into the ring with him. Dickie Divers is no stranger to high stakes match ups and a chance to become SWA X Champion will certainly have him having a look into his bag of tricks to use that experience advantage over the younger Leyton Buzzard.

The main event sees Jack Jester once again defending his Highland Championship, this time against Kid Fite. Jester will walk in on his 1015th day as Highland Champion, coming up against someone that’s also been there since day one but has yet to become Highland Champion. Kid Fite and Jack Jester have had many battles in the past, two standard bearers of the current Scottish wrestling scene with many of their students gracing many a match card up and down the country. Both can put on a hell of a match and this will be no different. A big main event for SWA’s Highland return.

Tickets are still available but limited here. Inverness is a fun crowd and are always up for the action that is presented. VIP entry is 2.15pm, get along to the Mercure Hotel for a cracking afternoon of good, clean and fun family wrestling.