The next stage on the WrestleZone calendar sees them return to Balmedie’s Leisure Centre (a lovely looking venue, by the way) on Saturday evening, as the road towards Halloween Hijinx nears its halt. 2019 has proven to be quite the eventful year for all at WrestleZone, but with the year now in its final few months, things don’t appear to be slowing down for the WZ roster. It’s full-steam ahead towards next month’s big show, this being the penultimate stop on the road to Halloween Hijinx 2019! 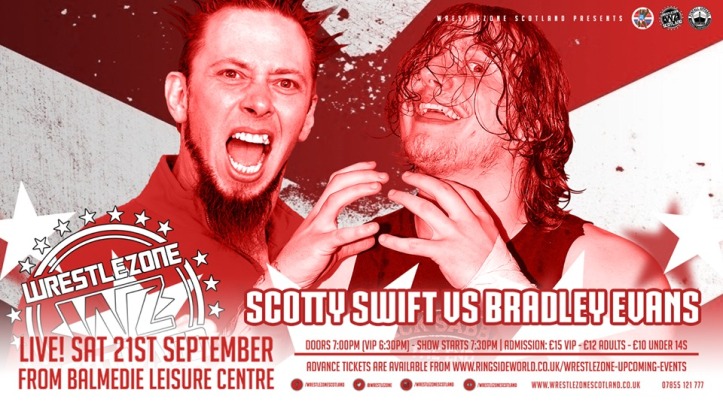 WrestleZone’s tag team division is certainly on fire at the moment, thanks to the work of teams such as The Rejected, The Sterling Brothers, The Kings of Catch, and Proper Mental over the last few years. Saturday’s show will see a singles encounter between two men currently associated with the division, as one half of the reigning Tag Team Champions Scotty Swift takes on The Foundation of the Future’s Bradley Evans. Although he may have been reluctant to the idea at first, Swift has relished in his tag team with soon-to-be-retiring Johnny Lions (still not over that fact). The former rivals have been fairly successful in their year and a bit as a tandem, helping rid WrestleZone of Sterling Oil as well as taking the Tag Team Championships out of the grasp of The Kings of Catch inside the steel cage back at Aberdeen Anarchy. While Swift and Lions now have Blue Thunder and William Sterling waiting for them in the near future, Bradley Evans will surely stop at nothing to get his and Ryan Riley’s name back in the title hunt. They were on the cusp of securing a future title opportunity at Battle of the Nations, only for Thunder and Sterling (who added themselves to the match before the bell) stole the pinfall over The Rejected. The Mad Dog may not be next in line for a tag titles match, but a win over one half of the current champs will certainly put he and Ryan Riley right up there for afterwards.

Mr P and Crusher Craib are set to do battle at the Balmedie Leisure Centre, with both men looking to get back into the championship picture following recent failures. The former Tri-Counties Champion Mr P hasn’t had the best of luck since losing the title to Jason Reed at Aberdeen Anarchy back in April, with losses to both Zach Dynamite (the man he defeated for the title) and William Sterling in recent months, although he was able to pick up a huge Handicap Match victory over The Outfit at the start of May. He embraces the chaos, but sadly it just isn’t enough to get the win these days. Meanwhile, Crusher Craib has had his hands full recently in dealing with the upstart Connor Inglis. The duo had been going back and forth since January’s Summerhill Showdown event but with The Creator of Carnage shockingly being pinned by the WrestleZone Training Academy graduate at Battle of the Nations, he now looks to rebound from that upset loss. A must-win situation for either man in when WrestleZone rolls into Balmedie.

Two men on opposite ends of the Tag Team Championships spectrum collide in Balmedie when Ted O’Keefe faces Blue Thunder. Battle of the Nations proved to be a very different night for these two individuals – Ted and Outfit associate Dino Del Monte failed to take the Tag Team Championships from Scotty Swift and Johnny Lions, while Thunder and William Sterling were victorious over The Rejected and The Foundation of the Future’s Bradley Evans and Ryan Riley to earn themselves a future crack at Swift and Lions’ tag titles. The history between these two men stems all the way back to the Regal Rumble 2018 pre-show when The Outfit made their WrestleZone debut, fresh out of the WrestleZone Training Academy. Although it was Dino who faced Thunder on this night (Ted’s official in-ring debut came two months later at Proving Grounds), the smaller member of The Outfit would plant The Masked Wonder into the mat with a gorgeous spinebuster. The pair actually faced off at last year’s show in Balmedie, with Ted O’Keefe picking up the win on that occasion – will luck strike twice for O’Keefe?

It’s been a recurring theme throughout this preview, and now here we are again speaking about the fantastic state of the tag team division in WrestleZone as The Rejected are set to take on Ryan Riley and Zach Dynamite, representing The Foundation of the Future. Since their formation back at the Regal Rumble, The Foundation of the Future found immediate targets in the form of The Rejected (and Kaden Garrick for that matter). Mikkey Vago and Balmedie’s very own Chris Archer aren’t too pleased with the actions of WrestleZone’s newest trio, and have made it their mission to be the ones to face the issue head-on. That brings us to this bout but sadly, Bradley Evans is busy facing Scotty Swift on this show so Zach Dynamite will be stepping in to team with The Inspirational One (we’ll get Archer/Vago vs Riley/Evans one day!). Dynamite claims that he is the uncrowned Undisputed WrestleZone Champion following Battle of the Nations, considering he performed the match-ending move on Liam Thomson only for Damien to take the pin for himself and retain the title. If he can’t have the Undisputed Championship or the Tri-Counties Championship, perhaps it’s time for Fully Loaded to go after the Tag Team Championships.

Two of the more recent WrestleZone Training Academy graduates are set to go toe to toe as Connor Inglis faces the mighty Caleb Valhalla. Both of these men have made a lasting impression on the WrestleZone faithful since their respective debuts, with Connor costing Crusher Craib numerous opportunities over the last few months before he himself scored a pinfall victory over The Creator of Carnage, whereas Caleb has decimated each and every person who’s stood before him (remember, he killed Lord Mr Malice in the Regal Rumble Match). This’ll be another of those classic David vs Goliath scenarios, something that Connor has certainly become accustomed to as of late. However, he’s overcome the obstacles that stand in front of him time and time again. Valhalla may currently be undefeated, but that streak could very well come to a crashing halt if the fighting spirit of Connor Inglis is anything to go by.

Two men looking to get back to winning ways will square off as Alan Sterling meets Kaden Garrick. Despite claiming that it’s all about Alan, the former multi-time Tag Team Champion hasn’t had too much success since the dissolution of Sterling. Sure, he’s picked up victories here and there, including a huge victory over Grado at Aberdeen Anarchy to end The Chubby Wee Chancer’s undefeated streak at Aberdeen Anarchy events but more recently, he’s failed to take the Tri-Counties Championship from Jason Reed at Battle of the Nations in a Triple Threat Match that also involved Andy Wild, and also suffered a loss to former Sterling Oil mate Damien in non-title action two weeks ago in Turriff. As for his opponent, well, he’s still yet to pick up a victory since Proving Grounds in May 2018 (not including gala shows, Kaden Garrick is 0-20 since then I believe). I’m really not sure what else to say about him right now as I just repeat myself time and time again when he’s on these previews so instead of speaking negatively about his win/loss record, let’s focus on the positives – he’s got one hell of an entrance theme!

VIP ticket holders for Balmedie are in for a treat as they get to see Dino Del Monte absolutely wipe the floor with Cysto. As previously mentioned when speaking about Ted O’Keefe’s match against Blue Thunder on the main card, Dino is coming off the back of an unfortunate Tag Team Championships loss to defending champs Scotty Swift and Johnny Lions back at Battle of the Nations. A bit of a setback perhaps for The Outfit, but nothing can prevent them from getting back to the top tier of the tag team division within WrestleZone. Or, maybe Cysto can. Ahaha, who am I kidding? Cysto will be demolished by order of The Outfit.

Tickets to the show are available from http://www.ringsideworld.co.uk, priced at £15 for VIP, £12 for adults, and £10 for under 14s. Fans can also pay at the door on the night. Doors open at 6:30 for VIP ticket holders and 7pm for general admission ticket holders, with the main card kicking off at 7:30.