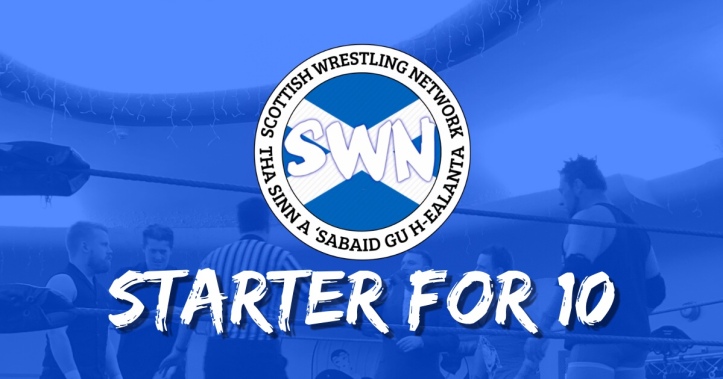 On this edition, Ewan O’Raw answers our questions.

I’ve always knew what wrestling was for as long as I can remember really, I have an older brother and I can remember us watching old videos from an early age in life. But I can remember really getting into wrestling from about 2005 all the way up until about 2009 then I took a break for a few years until around about WrestleMania 28 time, I can just remember all the hype surrounding Rock vs Cena and I felt like I had to watch the build up and the PPV itself. I mind watching that ‘mania and falling back in love with pro wrestling and I’ve never stopped watching since.

Growing up watching wrestling I remember loving guys like Edge and Kurt Angle. I also watched a lot of TNA in my younger years and loved watching some of the X Division guys like AJ Styles and Samoa Joe. I would need to say my all time favourite to watch is The Miz just for how good a character and wrestler he became over the years current day I enjoy watching a lot of the UK based guys at shows and learning from them guys like Kid Fite, Lou King Sharp, BT Gunn and Stevie Xavier just to name a few of the great talents in the country.

It was April 2017, I started my training at 19 years old I had wanted to start training since I had been about 15 but for one reason or another never got round to it. I remember it was the week after WrestleMania 33, I Googled local wrestling schools and found a school in Airdrie. By this point I also had a driving licence so didn’t need to depend on anyone getting me back or forth to training, so I ended up going to training the next Sunday and since then wrestling has became a huge part of my life and always will be.

I have a lot of influences as a fan in pro wrestling. I would say one of my biggest influences for a long time now would be Tyson Kidd, although he hasn’t been wrestling in a few years I always find myself revisiting his old matches I think he was one of the most underrated guys of my time. Another big influence for me, as a fan, I previously mentioned is The Miz. It’s just something about that over the top character that has had me hooked on him from day one and I think when it’s all said and done he will go down as one of the greats.

As a pro wrestler, people who influence me first I would need to say my coach TJ Rage because without him I would be nowhere and they are always pushing me to get better and come up with new ideas. I would also have to say, as cheesy as it sounds, all the guys and girls at the school. It’s a great team who all work with and push each other to the next level every week and I feel lucky most of the time to be apart of this team with the huge amount of talent coming through at the moment from both the Airdrie and Barrhead school is crazy and I’m just happy to be apart of it all.

I don’t know if i have a favourite opponent honestly In the last year and a half since my debut I’ve been lucky to have a lot of opportunities working loads of different opponents in different matches from experienced guys this summer on the w3l gala day shows from saquib ali and Johnny lions to getting to wrestle some of the best young and up coming wrestlers in the country like Daz Black, Logan Smith and Danny Edwards just to name a few at the pbw school shows.

When it comes to my favourite match I also struggle to pick as I am still very early into my wrestling career and feel like I am getting better with every match.

One match that sticks out always is one of my earlier matches at my second Academy Attack show. It was probably my third or fourth match at the time, it was me and Brian Frank versus Daz Black and Danny Clarke. I feel like us four lads had great chemistry together and I loved every minute of that match back then. Looking back there would be probably things I would change now but at the time it was the first time I came back after a match feeling like I had done the best I possibly could and was buzzing with the match afterwards for a long time.

Again I feel like I am still pretty early into my career and have a lot of goals I’ve set, but as far as highlights I would have to say I have a few. Obviously debuting was up there as that’s the dream when we all walk in that door at that first day of training, I would say after that getting asked to do my first showcase match last year in Barmulloch was a big highlight for me because at the time I had just recently debuted and was shocked to receive an opportunity like that so early but was also buzzing at the same time and was buzzing to get back in that ring again.

Lastly I would have to say making my Pro Wrestling Innovation debut in Viewpark, even though I was only in the match for a little bit before getting an elbow dropped on me by JD Bravo and then getting eliminated, it was still cool getting to wrestle five minutes down the road from where I grew up and went to school at.

When it comes to my dream opponent I would have to say The Miz and Rockstar Spud aka Drake Maverick are two guys I’ve dreamed of wrestling for years now because of their over the top personalities.

Opponents from across the UK I would have to say top of the list are guys like Martin Kirby, Grado, BT Gunn and Stevie Boy Xavier.

I do it because I love pro wrestling and I feel there is no better feeling for me than being in that ring getting to do the thing I love to do most which is being able to perform and entertain in front of the wrestling fans.

Thank you to Ewan for answering our questions.