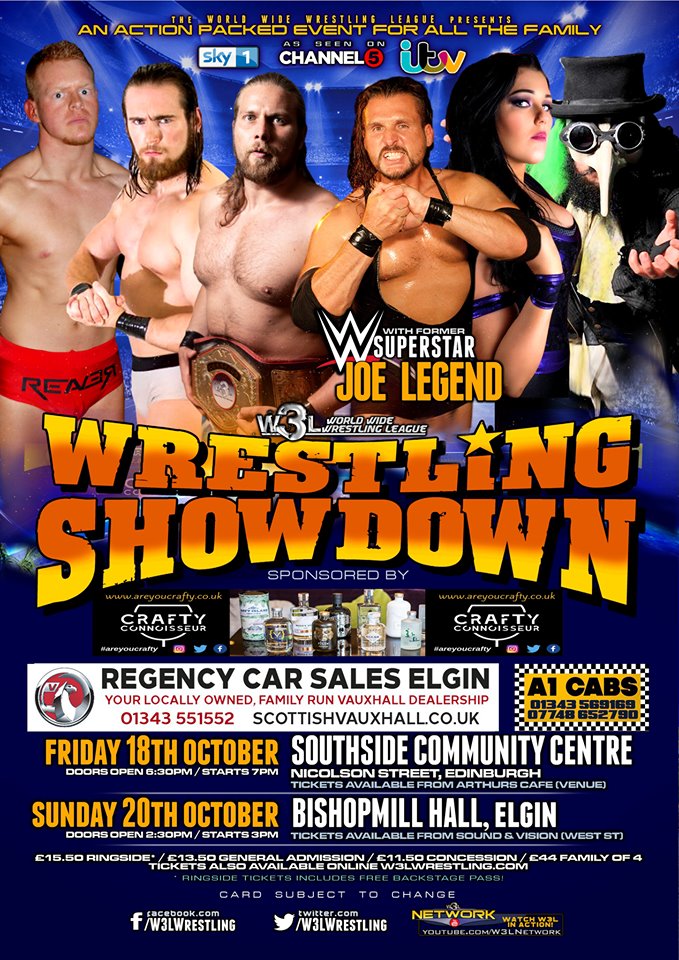 For the eighth year running, I was in attendance for World Wide Wrestling League’s annual trip to the North East, once again it was held at the chilly Bishopmill Hall. A venue that seems to get colder and colder every year. I had to trust the wrestling to heat up the place. In order to tape for Wrestling Showdown, one side of the ring was without seats which loaded one side and it was a good size crowd for the action. Before the bell, Stevie Wizard introduced the show and did the whole ‘hands up if you’ve never been etc.’ with a lot of hands going up at that point. Hopefully they continue to attend so W3L continues to head up here annually.

The show kicked off with Kevin Williams’ defence of the W3L Wrestling Showdown Championship against former champion Luke Aldridge. The crowd were a bit slow to get into the match but Williams did his best to get the audience to interact, which they eventually did and solidly got behind the ‘Super Wrestling Entertainment System’. When the kiddies laugh when you get knocked down in the first minute but end the match booing your opponent mercilessly every time he hits any offence, you’ve done a good job. A nice plot point saw Aldridge scale to the top rope and successfully landed a double axe handle, the move he attempted that ultimately saw him lose his W3L Wrestling Showdown Championship at Wrestlution XIII. Back and forth battle where it looked like it would go either way with big lariats aplenty with Aldridge throwing in a nice spinning heel kick. There were counters after counters which tied nicely into the finish, Aldridge attempted a sunset flip but Williams dropped down and hooked the legs of ‘The Exile’ to retain his W3L Wrestling Showdown Championship.

A fun opener to the show that really had the crowd eating it up all the way to the finale. Aldridge left dejected at the loss whilst Kevin Williams marches on to another defence. Good stuff.

It’s only taken until today (Monday) to realise that Williams was wearing a Wario hat to the ring because it has a ‘W’ on it that could also stand for Williams… well colour me slow, no Mario chants this time though.

Stevie Wizard told us that the participants couldn’t wait any longer so the W3L Heavyweight Championship match was taking place at this juncture. It started as a little fun with Musso toying with Stephens in the headlock of doom, including the rather nifty ‘now you see him, now you don’t’ transition into a grounded headlock for a some laughs. Stephens got more and more frustrated at Musso not taking the match seriously and eventually just grabbed a chair and smacked the W3L Heavyweight Champion on the back with it, rolling Musso back in and pinning him… for some reason… even though the match was over. Musso recovered and grabbed his own chair for a swing of his own and challenged Stephens to try again in a No Holds Barred/Elgin Street Fight/Bishopmill Hall Brawl (pick your favourite), Stephens accepted but walked off shouting that it would be on his time.

It was a long headlock segment that Musso was able to make work with funny comments throughout. I’m still blowing warm and cold with Craig Stephens, I just can’t get on board with him for any length of time. Sometimes he shows promise but others he’s far too hammy for my liking like a bad movie villain only missing a curly moustache and an evil laugh. This is coming from the guy that finds a masked man waving about bread totally hilarious, so what do I know eh.

After all that shenanigans, Leo King made his way to the ring without his W3L Breakout Championship, which I was gutted by because it looked cracking on the Instagram. Anyway, King got on the mic and had a moan that it had been a long weekend and he didn’t feel like defending the championship again, he wasn’t bothered about being up here and that it’s a bit rubbish etc. before issuing an open challenge to anyone in the back. Enter Joe E Legend to take him up on that challenge.

Legend schooled King in the early going, pummelling him everywhere and anywhere, much to the delight of the crowd. King finally gained the upper hand and rocked Legend but couldn’t keep him down for long, even after slamming Legend chest first into the apron edge over and over. Legend was soon back on offence and battered King a bit more, giving him the OH MY GOD elbow drop and Flatliner to finish the job.

Yes, I’m all in for Leo King. So charismatic and so full of character that he was a joy to watch. His animated antics didn’t detract from the beating he was getting but actually enhanced it. Larger than life yet not cartoonish, it came across very natural. You’ve always got a solid match with Joe E Legend in the ring but his whole, teaching the hotshot King a lesson in respect, thing was superb.

Legend thanked the crowd for coming and said that Scotland always treats him well as we headed to the interval.

Before the next match, Mr Mackie informed everyone that it was someone’s birthday. That someone was my brother who had turned 27 on the Thursday just past. For those that may not know, my brother Danny is autistic and has learning difficulties. I take him to the local wrestling as our like, brotherly bonding time, sometimes en mass with more of the family or just the two of us. We’ve been lucky to go to Rock N Wrestle in Forres, United Pro Wrestling in Buckie, WrestleZone in Keith and most often, World Wide Wrestling League in Elgin. Most years, when W3L comes to Elgin, it’s my birthday and The Bulgarian Baker is kind enough to give me a loaf of bread which Dan is obsessed by, one year spending the rest of the afternoon wanting the birthday bread. With W3L coming up so close to his birthday it was only right I contacted W3L to see if The Baker could do me a solid. In the words of a click-bait article, what happened next may surprise you…

After Mackie’s announcement of a birthday boy in our midst, Bozidar Branimir fetched a donut from his trusty bread cart to hand to Dan as a treat. Dan sniffed said donut… then handed it back to The Baker, not impressed with the gift at all. The Baker went back for another and handed it to myself whilst Mackie tried to coax Branimir back to the ring to start the match.

Every time I do any previews or reviews that involve Euan G Mackie I always gush about his character, his narrations, just everything, he knows how to entertain all ages and it’s an absolute pleasure to watch. This had a little twist to proceedings with Mackie actually instigating cheers, I reckon that’s the first time since I’ve attended W3L in Elgin and that’s been a number of years now.

The Bulgarian Baker is a wonderfully rubbish character, for eight years I’ve laughed at the absurdity of it all, his ever changing physique, height, attire and accent makes for it to be even funnier. Just when I think it might be time to call time on The Bulgarian Baker’s annual trip to Elgin… I still crack up when he’s waving about a baguette like a mad man. I’m a man of simple tastes clearly. The match itself was clumsy and haphazard in parts, Mackie on the offensive was crisp and smooth as always. The Baker used bread based attacks, because of course, including punishing Mackie with a camel clutch but using a (presumably stale) baguette placed across Mackie’s mouth to wrench back further and forcing his opponent to eat the baguette in the corner in a treacherous display. The Baker continued the attacks with kneads to the back (thanking you) and boots to the bread basket (insert thumbs up emoji) but was taken out with a Sliced Bread #2 (amazing) from Mackie followed up with a top rope leg drop as The Baker had a tray of donuts over his head and chest to add insult to injury. The Baker jumped Mackie after the match before he found himself being pushed out of the hall on his own bread cart courtesy of Mackie that almost took down the entrance way.

Super silly, super fun, long may The Bulgarian Baker continue to grace us with his presence!

Finally the main event arrived as we got the restart of the Musso-Stephens bout from earlier in the evening. This wasn’t for laughs as they both started brawling straight away with the match soon going to the outside. Musso slammed Stephens’ face into a table before setting the table up and catapulting Stephens into it which saw the table slide at an high speed towards the merchandise table and speakers that only survived due to the fast reflexes of those behind the merch counter. The match continued as Musso launched a chair at Stephens, not one of those folding chairs, the kind of plastic chair that you’d find in a hall, for example. Stephens powerslammed Musso onto the hard wooden floor in retaliation to an almighty thud that echoed around the hall. It eventually returned to the ring where Stephens introduced a turnbuckle hook but Musso dodged and grabbed it for himself. Stephens locked in an Anaconda Vice-Straight Jacket variation submission that looked to seal it, but Musso still had the hook in hand and rattled it off the back of Stephens’ head to break it up. The chair was brought back into play with Musso hoisting Stephens up for a Blunt Force Trauma DDT straight onto the chair to retain.

It was wild and chaotic, with little downtime as these two just went all out. One of the best displays I’ve seen from Stephens who just went for it without hamming it up, no monologues, just let his actions make the reactions so to speak. A crazy street fight to end the show, fantastic action.

When I tell people to come to W3L, or any wrestling in general, my first thing is to say is to just switch off and enjoy it. It’s an art form where your enjoyment comes from how much you let the content draw you in. It’s easy to watch anything and pick out problems and be negative about everything, with wrestling or any other form of entertainment, if you come in to enjoy it the odds are you will.

I was impressed for my first proper viewing of Leo King, he was in a battle royal last year so didn’t get much in terms of what he was like. I’m sure that he’ll take great pride in a terrible journalist having that opinion of him. He might just make Adam’s list soon, and is one of my early picks for a One To Watch for 2020. I’m already gathering a list of opponents in my mind that would no doubt have excellent matches with him.

The usual suspects of Williams, Musso and Mackie were great in getting the crowd going and involved, it was nice to see Joe E Legend again seeing as it’s been about five years since our journey from Aberdeen to Inverness in my car that wouldn’t go any higher than third gear and no faster than 30mph, fun times.

Other positives coming out was the speakers worked 100% of the time! No dips, no skips, all sound all the time.

And now begins the long wait for W3L to return, I’ll be keeping an eye on the W3L Network for any of the matches to be posted.