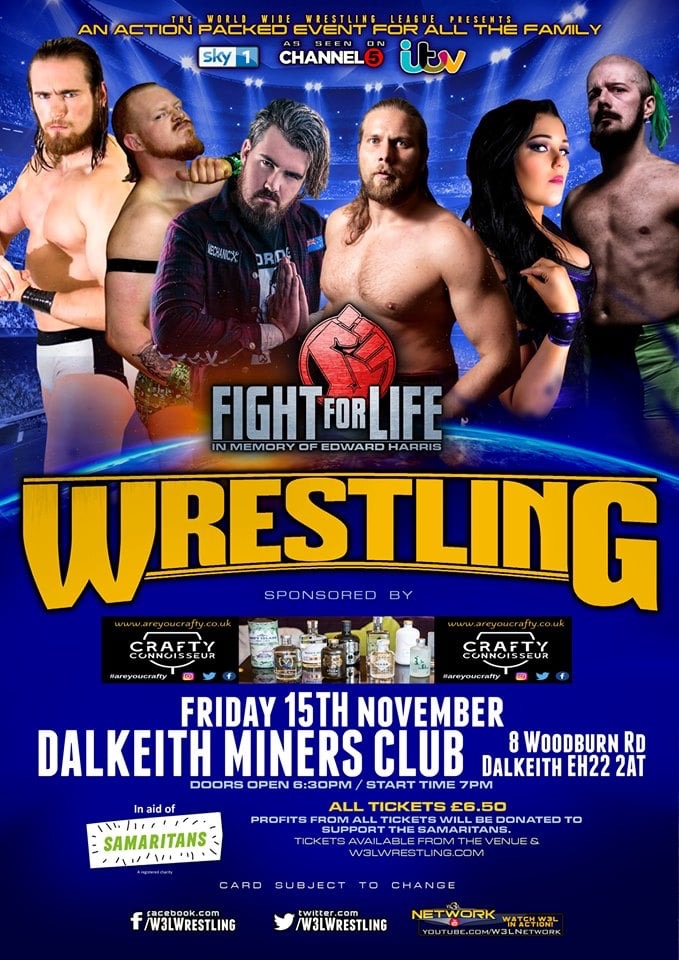 Z and Saffire, apparent reality TV stars, opened the show to talk about fundraising for Samaritans which is a worthy cause.

You can find out more about Samaritans on their website https://www.samaritans.org/.

King started with some stretches but was soon rolling out of the ring once the bell rung. Back and forth start but Ford unleashed some fierce kicks to the chest of King, before adding a cheeky kick up the behind when King tried to duck a further damage to the chest. Ford’s kick became his undoing when a King ducked a kick on the outside which saw Ford crack his leg off the ring post. Like a shark smelling blood, Leo King went straight for the legs to chop down Dean Ford. Ford almost snuck a victory in with an inside cradle but King kicked out and chop blocked the knee to continue the punishment.

Ford fired up with a flurry of forearms and jabs, almost finishing King off with an Enziguri but could only muster a two count. Ford tried to follow up but his knee gave out under a fireman’s carry. They traded punches until King spat in the face of Ford before rolling him up with feet on the ropes (and a clear shoulder up from Ford that was blocked from the referee’s vision), saw Leo King retain the W3L Breakout Championship.

A solid enough opener, very simple story told. Made me want to see Ford kick King in the face in the future. The finish was a little messy but the match itself was good.

A bit of fun frolics from O’Raw against the The Tormentor. O’Raw offered The Tormentor for the children in the audience to chop the masked man. Tormentor took over with knees to the back of O’Raw before following up with a back suplex. An OH MY GOD Elbow couldn’t do the job for The Tormentor. O’Raw got a second wind after an Enziguri, throwing out clotheslines, using a very nice looking DDT variation thing that was really cool. Tormentor kicked out and hit The Torment Slam for two. O’Raw ducked a Fists Of Fury attempt and landed the Skull Crushing Finale for the win.

As usual The Tormentor offense wasn’t that good. I feared initially that O’Raw was just doing a Grado tribute act but once he got going he was fun to watch and busted out some really nifty moves and sprung into action with some great agility. Not much really happened as there was a lot of Tormentor but from what I saw of O’Raw, definitely one to come back to.

Matt Tyson attacked Krieger before the bell as Frank and Nitro jumped Rage but Rage soon overpowered them. Krieger rolled back in and the two giants ran roughshod. Once everyone settled into their corners, Tyson was back with the distraction as Frank and Nitro took control by cornering Krieger. Frank started singing The Wanderer while chopping Krieger, which is certainly commitment, however he found Krieger’s foot committed to his face from a super kick. Both men tagged in their partners as Rage ran over KJ Nitro, who was only saved by Tyson pulling Rage from ringside. Nitro got a big boot in to take down TJ Rage. Frank went to use the W3L Tag Team belt but ended up hitting Nitro in the face, Frank was then speared by Rage and lifted for an emphatic Magic Killer to retain.

This was my first time seeing Brian Frank, I liked his chop bit with the singing. This was a fairly straight forward barrage from Rage and Krieger after the initial cornering from Frank and Nitro. Matt Tyson was a good addition as he provided some extra character.

W3L Women’s Championship – Emily Hayden vs Anastasia ended in a double count out.

Hayden riled up the crowd straight away as the boos rained down. They were firmly behind Anastasia after a round of yays and boos. Anastasia got the better of Hayden in the early going but Hayden was able to trip Anastasia to take over. Hayden used the five count to great effect, rubbing Anastasia’s face into the turnbuckle, pulling the hair, chokes, any short cut that could be exploited. Anastasia rolled Hayden into a pinfall from a crossface but the champion kicked out. Anastasia was able to hit an Enziguri, a corner running big boot and a facewash but no luck with the pinfall. Hayden lifted up Anastasia with The Oathkeeper and following up with the Oblivion splash. After another kick out Hayden threw a tantrum before rolling out of the ring. Anastasia followed as they fought at ringside. Hayden choked and punched Anastasia at ringside until the referee reached the count of ten. They continued to brawled on the outside as the wrestlers from the first matches ran out to separate them.

The match was fine. I think Anastasia, while very capable, lacks some intensity in her punches and kicks. They were quite soft. Hayden showed plenty character but the match itself wasn’t anything special, just fine.

Lots of arguing after all six men where in the ring. Strange and Stephens rolled out of the ring to leave Ali to get punched by the others. The actions spilled out everywhere. Bryden threw Stephens over the table of Z and Saffire as Z saved his pint and recorded the action.

After a really quick but impressive back and forth, Matty Mayhem eliminated Saqib Ali, but was quickly clotheslined and eliminated by Tim Strange. Strange and Mackie had some fun interactions which saw Strange crotched on the top rope and dropkicked out of the ring by Mackie. Strange went back to avoiding the action as Bryden hit a nice elevated DDT on Stephens for a near fall. Bryden eliminated Stephens with a T2K, it’s like a Chris Sabin Cradle Shock. Stephens returned to grab the leg of Bryden which allowed Strange to hit a Northern Lariat and applied a Camel Clutch to eliminate Taylor Bryden by knockout. After refusing to release the hold Mackie dropkicked Strange off Bryden. Mackie looked to be in control but the referee was distracted by helping Bryden out of the ring, it gave Strange the chance to grab a chain to hit Mackie in the face with to win and nab a future W3L Heavyweight Championship match.

Absolute chaos, bodies everywhere. So much going on, not sure if I enjoyed it to be honest. My eyes were darting all over the place in the opening flurry that I couldn’t get invested in anything initially. Matty Mayhem looked good, haven’t seen him since 5 Star Wrestling. Taylor Bryden looked very impressive in this one with lots of smooth transitions. All of them had maybe a moment to show something but overall it was a bit of a mess.

Two big lads started with a bit of grappling but neither were able to take advantage. Both started throwing punches and clubs before heading to the outside. Musso allowed the W3L crowd to get some shots in on Roberts with inflatable weapons and chops. Roberts eventually raked the eyes of Musso and slammed him onto the wooden floor at ringside. Roberts slapped on headlock, Musso fought out but was smashed with a nice dropkick from Bobby Roberts. Both men fought for a suplex on the other before Musso finally lifted Roberts up. Musso kicked out of a World’s Strongest Slam and dodged a Beefy Bomb. Musso just got Roberts off his feet with an attempted back suplex followed by a splash for a two count. Musso aimed his knee to the skull of Roberts for several knee lifts, a falling elbow drop from the top rope. Roberts wriggled out of a Blunt Force Trauma attempt for a spinebuster, a Beefy Bomb looked to finish it but Musso got a foot on the ropes to break the count. Musso sidestepped a spear, hitting a Rocker Dropper but Roberts rolled out of the ring. Roberts hung Musso onto the top rope and slid in for a spear that could only get two. Roberts dragged Musso up but was soon lifted and planted with the Blunt Force Trauma DDT for the win.

Probably the best match on the show. Didn’t have to be anything two fancy when it was two big guys just battering each other but it looked believable. The story with Musso’s injured back played into the fatigued moves that were used on the later portion of the match. A simple story that was played out very well.

A serviceable show that didn’t have me jumping or on the edge of my seat but didn’t have me cringing. Neither excited nor offended. It was what it was, other cliches. The crowd were into it which is always a good thing. I saw a lot of glimmers of great things which I hope to see in future events.

The full show is available on YouTube via the W3L Network below: