Fair City Wrestling have uploaded their second event for free on Vimeo, so like the first one I’ve had a gander in the hopes to see some bloody good wrestling. The card coming into this show had some matches that I just had to see so it was only fair to view the show. 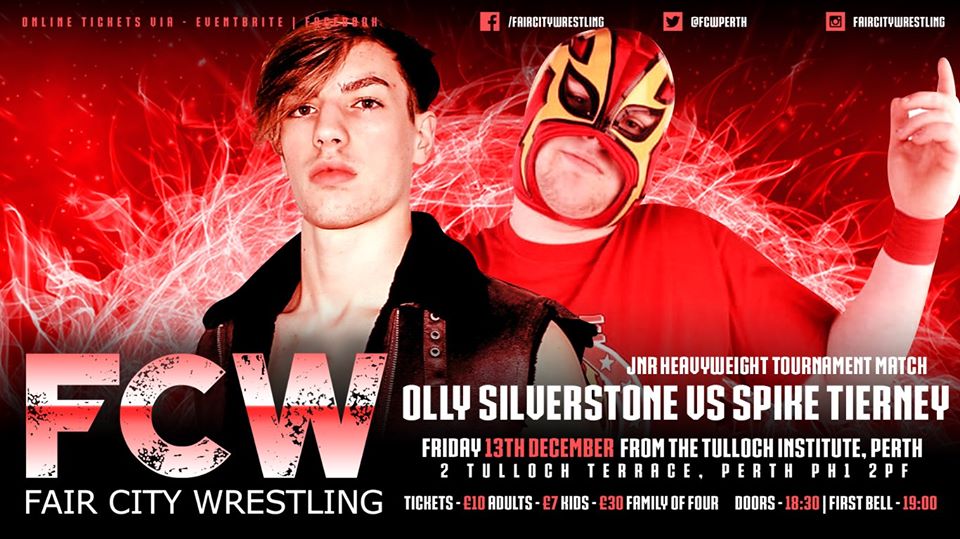 Silverstone looked wobbly in the early going but soon got his bearings as the two trading pinfalls and counters but it did get a little sloppy as the match continued. Spike hit a nice leap over Rocker Dropper for a two count and certainly showed some of his agility with plenty dives and leaps at every turn. The home town kid Silverstone was not one for the crowd support and got cocky, using cheap shots when possible. They brawled into the crowd where Spike was drilled with a Shotgun Dropkick while he was sat on a chair. Silverstone took over with chops and a lovely float over suplex as he aimed to pick apart Tierney. Tierney fought back as the two started throwing wild fists and chops to gain an advantage. Silverstone hit a handspring back flip over the top rope onto Tierney on the floor which was pretty cool before stretching Tierney into a unique pin for two. Spike rallied with the 01382 (619 to you and me) as the match continued with more back and forth. Silverstone hit a nice running Shooting Star Press for two as the two traded kicks and forearms until both were knocked down. Silverstone got Tierney hung up into the ropes and launched himself with a senton, following up with a front flip from the top turnbuckle to the floor. Tierney countered a top rope hurricurana with a powerbomb. Tierney countered a powerbomb attempt into the Code Red for the win.

Of the limited matches I’ve seen, this was not the best performance I’ve seen from Ollie Silverstone as he didn’t look, I don’t know how to describe it but he didn’t look totally motivated and almost moving in slow motion. He was doing the moves but with little conviction, especially early on. He got some nice moves in towards the conclusion. Tierney looked to be doing a lot of the work in this one as he certainly showed a lot of his ability. An off night for Silverstone perhaps but for someone so early in their wrestling journey I’m sure it’s just a minor blip.

Tommy Cross and Umar Mohammed locked up in the early going with Mohammed finding inventive ways to wriggle out of holds but Cross showed some quick thinking of his own. A little miscommunication with a collision didn’t hamper what was a fun opening section. Alpha Male and Bryden made their way in as Alpha Male launched Bryden overhead with a sharp German Suplex. Alpha Male hit the Alpha Bomb as he and Mohammed traded quick tags, as the more established team of the two. After a distraction from Cross, Mohammed found himself in the wrong corner with Bryden and Cross taking turns to punish Mohammed. Mohammed eventually got the tag where The Alpha Male has a couple splashes, bicycle kicks and a fallaway slam or two for his opponents before finally finishing the match with a chokeslam on Taylor Bryden.

A pretty good match, the dynamic between Umar Mohammed and The Alpha Male is growing on me. Mohammed takes the beating then The Alpha Male comes in and smashes folk about. Wrestling is easy sometimes.

John Kerr walked into this one not knowing who his opponent was to be, turned out it was Ken Kaiden. The broader Kerr stood his ground with the early shoulder barges from Kaiden which took Ken off his feet. Kaiden sent Kerr out of the ring with a dropkick followed by a dive to the outside as the match continued on the outside. Kerr found himself chopping the ring post as the match returned to the ring. Kerr was able to hit a Samoan Drop followed by a running senton in a nice sequence as he took control of the match. Kaiden fought back but was downed again with a Finlay Roll from Kerr who just stomped whatever body part was nearby. Kaiden returned with a flurry of forearms and a springboard corner dropkick for a close two count before a running knee from Kaiden spawned another close two count. Kerr returned the favour with a Claymore running single leg drop kick but that was another near fall. Kaiden focused plenty of kicks to the back before finishing the match with the Double Impact, a swinging fisherman’s neckbreaker.

It started to fall apart a little bit towards the end but the majority of the match was really well put together. On the surface John Kerr doesn’t look like he should be as capable as he is but the boy can move. He carries himself with a swagger, like he definitely looked like the bully. Good stuff.

We got a little cringe-worthy bit at the start with Leon presenting a scarf for Faith but was only met with an attack when his back was turned. Faith battered Leon from pillar to post to start off with, ducking any comebacks and just smacking Leon around the ring. Leon landed with a nasty thud from a missed dropkick into the corner as his offense continued to be brushed off. Leon finally created some space through a sit out spinebuster as the crowd started to get behind ‘The Man of Glam’. Leon fought back with a flurry of forearms, hoisting Faith up with a gutwrench suplex for two. Faith pushed out of an Unprettier attempt, hit Leon with a hard powerbomb followed by a knee to the face but Leon somehow got a shoulder up. Leon countered a Tombstone with a headscissor as the two fought back and forth. Leon almost wrapped it out with a powerslam but it couldn’t quite put Faith away, a second attempt was countered into a package Tombstone which lead to Aspen Faith picking up another victory in Fair City Wrestling.

A great build during the match, Faith absolutely hammered Zack Leon but Leon fought back even after a nasty landing early on. Leon looked to have it wrapped up but Faith proved too much. I would definitely be up for seeing these two battle again.

The wild eyed Lou King Sharp unsettled Jason Reed in the early going with his rabid energy trying to get the match going. An early eye rake from Reed just seemed to annoy Sharp as he unleashed dropkicks all over the place. Reed cut off a suicide dive before slowing the match down with boots and sneaky chokes, wearing down Sharp with a chinlock transition into a rear naked choke. Sharp fought out of it but couldn’t take advantage. Sharp attempted a Cactus Clothesline but couldn’t quite get the power to get Reed over the ropes. Reed rolled away from a Frog Splash and followed up with a nice spinebuster for a two count. Reed hit an Angle Slam, it looked like he was trying to transition into another but Sharp wriggled out, hit a Finlay Roll and finished the match with a Frog Splash.

No hanging about here, just straight into the action of which there was plenty and it finished very quickly. I think these two could do something really special with more time and a little bit of story but from what was on offer I enjoyed it. 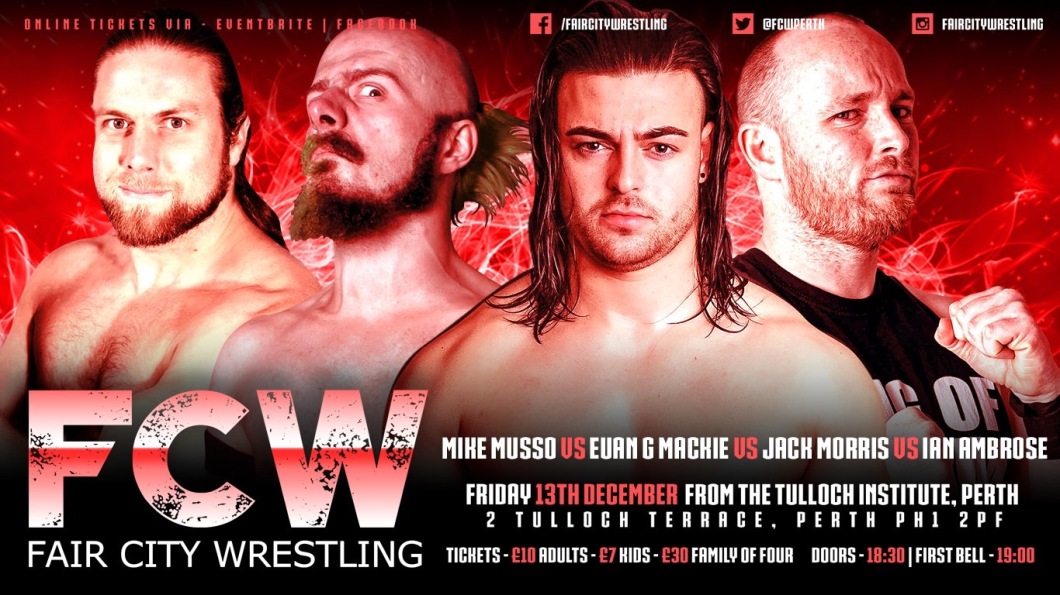 Mackie started with monologue-ing which didn’t make many friends which lead to his three opponents to take turns battering Mackie around the ring. A trio of scoop slams and a pinfall attempt from Musso saw the match break down into carnage. It quickly left the ring, Musso legsweeped Ambrose and Morris back first into the apron on the outside while Mackie chilled at the refreshment bar. While everyone was distracted, Mackie suddenly appeared on the top turnbuckle and launched himself onto the three on the floor, Ambrose followed with a Suicide Dive onto his opponents before Morris got his turn with a springboard senton. So many moving parts with Morris catching Mackie into a powerbomb that landed on Ambrose. After a superkick on Mackie from Ambrose, Morris and Ambrose traded hard forearms and chops until they both knocked each other down with stereo clotheslines.

Musso took control with a couple elbow drops but soon found himself hung on the ropes by Morris. Mackie grabbed Morris for Sliced Bread #2, a second attempt onto Ambrose was countered into a Wombstone but Mackie rolled through. He couldn’t escape a double foot stomp but before Ambrose could take advantage Musso rolled in to interrupt. Morris hit an attempted TKO but Musso chucked him into the corner so he could hit a Blunt Force Trauma DDT. Mackie rolled in to low blow Musso and Green Mist Morris to pin the scraps of Ian Ambrose to win.

Chaotic, wild, carnage and Mackie once again was a devious goblin who picked the bones of his opponents work. I loved it.

The show got better as the matches went on, it started off okay but by the main event I wanted to see more with the second half of the show really producing some really fun matches. I would’ve liked to have seen Sammii Jayne versus Emily Hayden which happened at the event but wasn’t present on the uploaded show but overall another solid event from the folks down at Fair City Wrestling as they move on to Tulloch Turmoil on February 7th.

The full show is available on Vimeo which I have linked below: