The stars of the Granite City are jetting off to Peterhead on Saturday evening as WrestleZone debut at the town’s Rescue Hall, with the Regal Rumble edging ever closer. This will only be the company’s third show of the year, but what a year it’s been already. We’ve already seen Joe Hendry and Dave Conrad make their WZ debuts and we’ve seen new Tag Team Champions crowned as Crusher Craib and Connor Inglis put their past differences aside to nab the gold from William Sterling and Blue Thunder. Who knows what Peterhead has in store…

In a huge main event, current Undisputed Champion Damien is set for non-title action as he faces both Bryan Tucker and Ryan Riley in a Triple Threat Match. Even though the title isn’t on the line here, ‘The Revolutionary’ still needs to be on top of the game. Tucker is, as far as I’m aware, one of the coaches at the WrestleZone Training Academy (excuse me if I’m wrong there), so he perhaps had a hand in creating Ryan Riley, plus they teamed together in Montrose to face Shawn Johnson and Kaden Garrick. That match ended in some sort of no contest – now, I’m not sure what happened, but clearly Tucker and Riley got the better hand seeing as Shawn Johnson isn’t on the card for Peterhead. As mentioned, this is a non-title affair, but a pinfall or submission victory over the current Undisputed Champion would do wonders for either Bryan or Ryan (see, even their names are basically the same), particularly for the latter seeing as he’s still fairly recently into his career. They’re against Damien though, the man who ended the unpinned streak of Caleb Valhalla (albeit with a hand from Alan Sterling, but the point still stands), so expect a fairly competitive main event come Saturday.

When it comes to WrestleZone, they’ll often pull out a huge surprise on one of their smaller town hall shows. We’ve seen it in recent years with Zach Dynamite capturing the Tri-Counties Championship from Aspen Faith, and we saw it again just under two weeks ago when Crusher Craib and Connor Inglis lifted the Tag Team Championships from Blue Thunder and William Sterling. The formal rivals had formed their alliance at the previous show, when ‘The Creator of Carnage’ saved Connor from a post-match assault at the hands of Sterling, which I believe (by me, I mean Mikey Innes pointed it out on Twitter) makes Connor the second fastest in terms of length of time since graduating from the Training Academy before winning a championship – he’s behind only Mikkey Vago, who officially debuted in January 2015, winning the Tag Team Championships that November with Chris Archer. In true William Sterling fashion, he was livid at the outcome in Montrose, and has already invoked the former champions’ obligatory championship rematch. Bit of a problem there as Blue Thunder suffered a minor arm injury in that match. After asking around the locker room, it seems the only man willing to team with the former Sterling Oil member is everyone’s best pal The Super Executioner. Don’t be expecting a surprise here folks.

The road to Aberdeen Anarchy officially kicks off on March 21st with the Regal Rumble, but to get us all in the mood for the event, WrestleZone management have set a Triple Threat Match for their Peterhead event. Mikkey Vago, Bradley Evans, and Dino Del Monte will collide, with the biggest prize of them all on the line – the coveted number 25 spot in the Regal Rumble Match. Vago, Evans, and Del Monte are all experienced tag team grapplers in their own right, but a win for either of them in the Rumble would push them one step closer to bringing championship gold to their group, that being The Rejected, The Foundation of the Future, and The Outfit respectively. The Rejected have had their issues with both of these teams for a considerable amount of time now, having squared off on multiple occasions with Dino and Ted O’Keefe in both singles and tag team action, while their recent rivalry with the 2020 Team to Watch in the SWN Year End Awards, The Foundation of the Future has seen some fascinating encounters between the members. There’s a lot on the line here. Realistically speaking, either of these men could be a viable contender to win the Rumble come March 21st – being the final entrant could be what they need to move one step closer to the main event of Aberdeen Anarchy weekend.

The undefeated streak of Caleb Valhalla came to an end in his hometown of Montrose as the Norse God was defeated by defending Undisputed Champion Damien, albeit with the ‘accidental’ assistance of Alan Sterling via the TV screen. Alan’s captain’s hat (which has now been found, thankfully) is of course far more important than Caleb winning the Undisputed Championship in his first one on one championship opportunity. Even though Alan has managed to get his hefty bodyguard both a Tag Team Championships match at the Regal Rumble as well as a spot in the Regal Rumble Match itself, it likely won’t be enough for Caleb to ever forget what happened that evening. Being cost the title by your pal is one thing, but having it happen in your hometown, in front of friends and family is a whole other story. Now, Valhalla is heading to Peterhead with vengeance on his mind – yep, Chris Archer might actually die here. ‘The Outcast’ has become known for his speed and agility, busting out moonsaults and all sorts when the time calls for it, so he’ll need to use every ounce of that to escape the wrath of a man who could’ve very well been the Undisputed Champion right now, had it not been for ‘The Captain’. 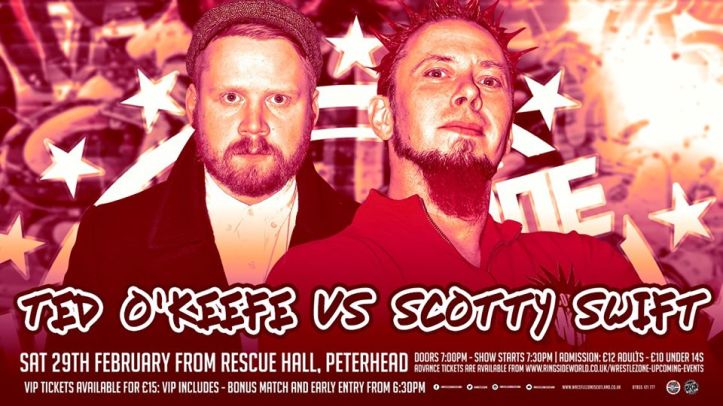 Ted O’Keefe is a great wrestler. His spinebuster and alliance with Dino Del Monte in The Outfit are both superb things in WrestleZone right now, there’s no denying that. However, when you start throwing insults towards a man’s dog, you deserve everything that comes towards you. If you haven’t seen, Scotty Swift’s dog Nova is an absolute beaut of an animal. ‘The Red Haired Warrior’ made his return to in-ring action in Montrose after suffering a minor injury during his Tag Team Championships match, suffering a loss to Ted’s tag partner Dino Del Monte on the pre-show in short order. Yes, all it takes is one of those nasty elbows to the jaw to be pinned by Del Monte, but now Swift has gotten all riled up with the dog talk. Another loss for Swift? Surely not, given what’s happened.

The storied history between Mr P and Zach Dynamite will have another chapter written in Peterhead as they face off in singles action once more. Things kicked off between the pair at Aberdeen Anarchy X in September 2018, when Bradley Evans turned on P to prevent him from winning the Tri-Counties Championship from Andy Wild, allowing Dynamite to instead lift the title for a second time. After returning from a brief absence the following month, Mr P went on to defeat ‘Fully Loaded’ to end the year on a night, winning his first taste of singles gold in WrestleZone during a wild Christmas Brawl. Both men are at vastly different points in their career now though, with Mr P recently coming off the back of a huge Handicap Match victory against both members of The Outfit, whereas Dynamite is now flanked by The Foundation of the Future – Bradley Evans and Ryan Riley. Sometimes, the numbers advantage is all you need.

It’s not often you see the VIP ticket holders treated to a championship match, but that will very much be the case in Peterhead as Alan Sterling returns to competition to put his Tri-Counties Championship on the line against Kaden Garrick, a man yet to win his first singles championship. While often accompanied by Caleb Valhalla, it’s almost certain that won’t be the case come Saturday, given what happened in Montrose. As such, it’s entirely possible for ‘The Doric Destroyer’ to win the title, which would mark his first championship victory in four years, while also allowing him to get retribution against Alan. If you recall, it was at Battle of the Nations 2016 when Alan teamed with brother William to dethrone Kaden and Mr P of their WrestleZone Tag Team Championships, with Alan ending Kaden’s unpinned streak in the process. It’s safe to say the powerhouse hasn’t exactly been the same since then…

Tickets to WrestleZone’s debut at the Rescue Hall are available right now from Ringside World, priced £15 for VIP, £12 for adults, and £10 for children. Fans can also pay at the door on the night, while an online-exclusive family of four option is also available. Those are priced at £35. Doors open at 6:30pm for VIP ticket holders and 7pm for general admission, with the action officially kicking off at 7:30.