Review: Discovery Wrestling ‘All About The Raffle’ 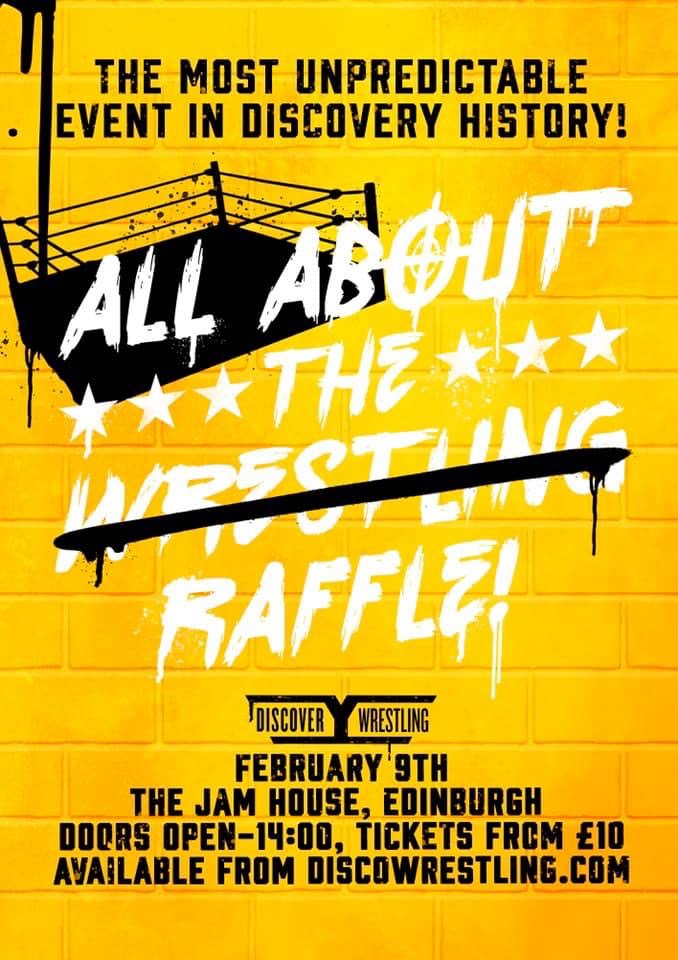 **Disclaimer: this show was in February and featured some wrestlers who are no longer involved with wrestling. Most of this review had also been written before the Covid outbreak, one or two adjustments have been made to compensate for the fact there has been no future shows yet**

So I made the short hour or so journey to Edinburgh for the first Discovery Wrestling show of the year. Another almost sell out crowd packed into The Jam House for a very unique show called “All About The Raffle” where almost every match was unknown to the fans until the wrestlers emerged through the curtain. This is a very successful concept that has been tried by among other UK promotions like Progress so I was very intrigued to see how it played out here.

The returning DCT took on Jason Reed in the first match out where the loser would enter March’s Disco Derby at number one. Reed probably had one of the best years of any Discovery wrestler in 2019 and put on another great showing against the former ICW Champion. The Jam House crowd is always hot and popped loudly for DCT’s return, a great back and forth match which I wouldn’t be surprised to see being a title match in years to come. The right winner here though. I get the feeling Reed would have been the iron man of the Disco Derby when we will get to see this though remains up in the air.

Both of these teams and both woman had a heated rivalry going into this match. Originally announced as Kasey teaming up with her fellow Northern Ireland natives The Kings of the North, Simon Cassidy announced he had read the raffle tickets wrong and the two ladies had to swap sides. The winning woman would also get a women’s title match against Session Moth at a future show. While the raffle slip up made for some funny moments here I would have like to have seen these two tag teams have something to play for like the ladies, Discovery tag titles are desperately needed now. A number of shows have featured a big attraction tag match and that can still happen but time for the regular teams to have something to aim for. Anyway Sammii now earns a future title match whenever that may be.

Probably the only match on the card I didn’t get here. I think it would have made more sense to make this a normal tag match and give Killer Xero the strong looking win but that’s only my opinion. Enjoyed seeing Sam Barbour work as a face, at one point the crowd really believed he could do it when he launched a comeback but ultimately to no avail.

A match I really had been wanting to see for a while, two men a similar stature and similar build. Theo just off the back of an excellent feud with former tag team partner Christopher Saynt and new number one contender for the Discovery Y Division title was in possibly his biggest contest yet in the promotion. BT Gunn has made no secret of the fact he wants to be next in line for a title shot. Very hard hitting this with some big chops particularly from Gunn. They genuinely made you believe either man could win. In the end I think having Theo win was the correct decision, it made the number one contender look strong without making Gunn look weak. It might be into next year now when Doros gets his title shot but it’s not unrealistic to think Gunn could be the first challenger after that.

I must admit when I saw Gene introduced to face Joe I didn’t think it would work. Gene is usually a comedy wrestler whereas Joe is “all about the wrestling” but it definitely did. There was no Munndertaker act here this was the best wrestling match I have seen from Munny. To take a man who regularly challenges for the NXT UK title to the limit was great work. Don’t get me wrong it was right that Coffey won but this was a standout performance in the work I’ve seen from Munny.

Kind of difficult to know what to say about this one so it will be brief! It was great to see Valentine and Mr News (Discovery owner Alan Smith) wrestle as they go way back and they definitely had the crowd behind them. Saynt and Nattrass got the very unpopular win.

Another unique match fought under battle royal rules. The crowds raffle tickets came into play here. Ten members of the audience were paired with the wrestlers and if their wrestler won they won a prize.

A first appearance in Discovery for many of these wrestlers and a great chance to show the talent coming out of the Reckless Intent training school. Most of the crowd assumed that Big Grum or Deacon Awesome would win so were surprised that Adams went over. Hope some of these wrestlers fit into the cards when wrestling returns.

Many wondered, with the absence of Y Division Champion Joe Hendry, what the main event would be and were surprised in particular to see the always independent David Starr emerge from the back to take on Mikey Whiplash. A lot of Discovery’s fan base follow other promotions so were aware of Starr’s work. While it would have been nice to see something on the line here, this was a proper wrestling match, no shenanigans here. Both men tore into each other hold for hold, move for move. If you’re more of a fan of the hardcore type matches this probably wasn’t for you but it was a great main event for the crowd in attendance who appreciated the work on show.

Overall another action packed night from, in my opinion, what is now the number one family promotion in Scotland. The two middle matches in particular shone through. The formula of “all about the wrestling” essentially focusing on the in ring product seems to have got Discovery a large following which hopefully they keep for years to come. Attracting 300 to 400 fans every show is a big task given how much it costs for family outings these days so all the credit must go to the people behind he scenes.

What the future holds is difficult to tell at the moment, a sad photo of The Jam House without its sign was recently posted on Facebook suggesting it may not reopen which is not great news. While at least a couple of promotions down south have announced socially distant returns this hasn’t been the case in Scotland yet due to Covid regulations. Discovery have confirmed that talks with other venues have taken place but likelihood is when shows do return it will be with a reduced crowd at first. Whatever the case we all hope to have wrestling back sooner rather than later.