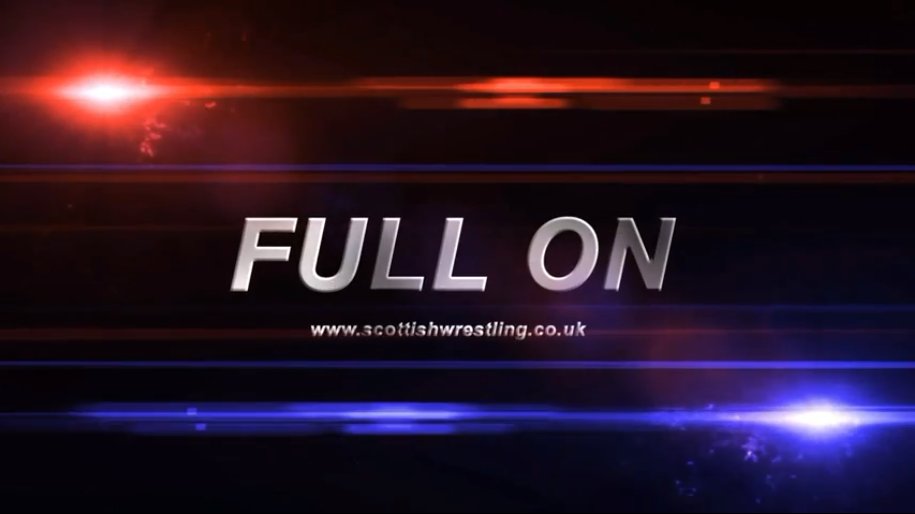 I’m back to watch two more episodes of Scottish Wrestling Alliance & Zero 1 Scotland Full On, still available on the YouTubes for everyone to see. Before I go into the show it’s best to once again copy and paste the disclaimer:

Should throw out a warning, I’ve just went that I’ll watch and review these shows – I don’t know who is on them until I actually watch them so there may be some wrestlers that are no longer around for one reason or another. I won’t labour the point but, as it says in our big important notice that we here don’t condone the actions of those accused, just that there may be mention of them at some point.

We’re joined by Simon Cassidy on the mastering of ceremonies with Stevie The Wizard on refereeing duties for this episode. Billy Kirkwood and DB Mackle return to commentating duties with the SWA Junior Heavyweight Championship tournament returning to the focus of the show.

The episode kicked off with the two welsh entrants of the tournament looking to get to the finals of the tournament to crown the SWA Junior Heavyweight Champion. Boar tried to assert his power early on but Andrews lived up the Lightning Kid moniker, tying Boar up with submissions and flips to discombobulate the beast. Once Boar got a hold of Andrews though he immediately threw him gut first into the ropes to slow down and control the pace.

After a powerbomb attempt from Wild Boar was wriggled out of, Andrews got a bit of momentum going, slipping in an enziguri, victory roll into a foot stomp, moonsault, even planting Wild Boar with a full nelson sit out bomb but it couldn’t keep his opponent down for the count.

The action went back and forth, Boar met Andrews at the top turnbuckle, hoisting him into a vertical suplex stance before dropping Andrews down with a Razorback Driller, almost like a Steiner Screwdriver to pick up a pretty dominant win.

It was a good match, not the most thrilling of bouts but it was serviceable to the show. Inoffensive.

Little bit of grappling to start off before Meadows got frustrated and slugged Girvan with a hard forearm to the face. Meadows showed some aggression, catching Girvan in the ring apron and pounding with straight fists before using his knees and liver punches to continue to wear down his opponent.

Meadows used any little dig, with uppercuts to continue the domination until Girvan found a way to spring off the second turnbuckle with a flying collision to reset the match. Girvan avoided being trapped in the apron again by diving through the top and middle ropes with a flying forearm to continue his run. A springboard forearm couldn’t finish the match for Girvan with Meadows able to hit a flatliner and headed to the top rope for a moonsault, Girvan pushed Meadows to send him into a tree of woe position. Hesitation dropkick and Future Shock DDT sealed the win for Lewis Girvan.

The two shook hands after the match.

A fun bout, these two were on fairly even footing with them trying to outsmart the other and even learning from previous moments in the match to their advantage. Good stuff.

Billy Kirkwood was joined by the soft spoken Robbie Brookside on commentary for episode six.

We kicked off episode six with two wrestlers that didn’t make it into the semi finals of the SWA Junior Heavyweight Championship tournament squaring off. It started off with a lock up, traded waist locks and wrist locks in the early feeling out process. Dunne hit a nice enziguri to send Anderson out of the ring to reassess the situation.

Anderson suckered Dunne to the ropes to hang off the top rope and taking over the match, using his power to throw Dunne into the corner, leaning into a chin lock wear down the neck and upper back of Dunne, adding to the punishment with hard clotheslines to send Dunne landing high on his back.

Dunne picked up the pace, found the space to hit a bit front dropkick from the top rope for a two count. Anderson snapped and pounded Dunne in the corner, not breaking the referees five count and found himself disqualified. It didn’t stop Anderson from stomping on Damien Dunne as staff tried to get Anderson back, which they finally did.

The match stopped just as it was reaching a peak, of the two matches I’ve seen from Andy Anderson I’ve quite enjoyed his work. Something about Damien Dunne being nonplussed to be there didn’t really put me on board for his comeback. The action was good but with the match cut short with the disqualification it didn’t quite reach the heights it could’ve been.

The larger O’Connor and Renwick took the early advantage, punching their way and brawling against the masked duo and just imposing their will. O’Connor even choked Tornado with his own cape, Edna Mode would be furious. BMW introduced the ladder but were soon finding themselves on the receiving end of a dropkick to send the ladder into their faces.

Solar and Tornado relied on quick kicks and forearm along with tandem offence to keep BMW down. It was to no avail with Renwick pushing both off a ladder leading to O’Connor coming back in and the two keeping The Masked Avengers grounded.

There was some torturous double team moves, with a corner spear/forearm combo and a double trap half Boston Crab/basement dropkick combo that made Britain’s Most Wanted look deadly.

Renwick once again thwarted a ladder climb from Solar and Tornado, finding himself trading forearms with Solar at the top before finding themselves crashing into the ropes. O’Connor brought in a second ladder, with himself and Tornado duking it out, Tornado hit a hard sunset flip buckle bomb on O’Connor to keep him down for a moment.

Solar attempted a springboard moonsault to the outside but was caught by BMW, only to find themselves having Tornado crash on top of everyone from the top of a ladder. Moments later all four were fighting it out on the top of the ladders. Tornado was able to unlatch the SWA Tag Team Championship with Renwick knocking down Tornado to grab the W3L Tag Team Championship, effectively splitting the titles as the referees conferred to confirm the decision.

For a ladder match it wasn’t particularly special or exciting, the big ladder collisions didn’t get any time to breathe before long everyone was back up, doing something else before you knew it. Damian O’Connor was particularly noticeable in not showing much of a weakness to any offence, brushing off attacks without breaking a sweat and looking frustrated if something looked to have gone array.

Solar and Tornado, when they weren’t getting battered, had some brief moments that looked really great but overall the match seemed rushed. There were some nice tag team moves but they were few and far between. The finish was a bit weird but it was an inventive way to split the two companies tag team championships.

Not the most exciting of episodes this time with all the matches ranging from fine to good. No real stand out moments that would have me clamoring to re-watch them again.

The next two episodes form the finale of series one reviews and I’m hoping for a really entertaining match or two to make up for this little lull. I assume Wild Boar versus Lewis Girvan will be in there which could be a really good match up, we’ll find out next time.