So… COVID-19 eh? That’s still a scary thing, so let’s head back to the archives of pro wrestling in Scotland. World Wide Wrestling League have been heading back through previous shows to still provide an episode of Wrestling Showdown each Sunday, aptly called Wrestling Showdown Rewind.

For five weeks, Wrestling Showdown was focused on W3L’s trip to Elgin in 2012. Handily enough this was my first World Wide Wrestling League event, my second Scottish independent show overall, so I’ve taken a look back at the event and see what memories are brought up.

The year was 2012, I was 22 and just starting my journey into the world of Scottish professional wrestling. The show poster around town had such faces as Nikki Storm, Damian O’Connor, among others, unfortunately they were not at this show.

Such merch I remember buying was a Sin Cara mask (that got lost in Dundee of all places) and a copy of W3L-SWA Clash of the Titans. I was also one of those guys that took a wrestling belt to shows as I had ventured from my flat to the Elgin Town Hall wearing my WWF European Championship around my waist. A brave man to carry so much gold in the mean streets of Elgin. 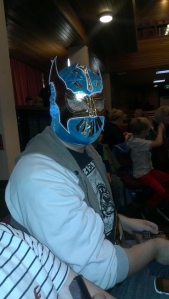 Anyways, you don’t want to read my ramblings like that really annoying story before a recipe, let’s just get into the meat and veg of the review.

Commentator Joe Fordyce informed us viewers that the future Lucian Maynard Smith and Luke Aldridge, then Luke Windsor, had his debut W3L match on this show. This was also the return of Euan G Mackie as the now classic Mackie look with the tutu and leopard print.

Mackie bested Windsor in the opening exchanges but the height advantage of Windsor had him overpower and try to impose his will on Mackie, hitting a Clothesline From Heck for a two count. Windsor continued the control over Mackie with kicks and elbows to the back. Mackie fired back with a springboard crossbody before dropping his tights and running his hip into Windsors face for a near fall. A Sliced Bread #2 from Mackie got another near fall.

Windsor crotched Mackie on the top rope before going to meet him but was met by a double nipple cripple before being victim of a seated senton while draped in the turnbuckle to ultimately be pinned.

Windsor was very much unpolished, a bit floppy in his movements, just a lack of finishing the movement and committing to it fully. Of course over the last 8 years and becoming the exILE, things have certainly improved. A fine match, bit stuttering in parts, nothing super special but served as a good opener.

Two guys that aren’t wrestling right now, well no one is, but both are retired as far as wrestling goes. Fordyce again advises that this is Livewire’s W3L debut and if I remember correctly he was introduced as being from Elgin for a home town pop. Livewire was trained by Jason Rotanda who appeared on ECW on Sci Fi against Vance Archer aka Lance Archer in AEW. I only bring that up as I remember seeing a make shift sign around Banff and MacDuff saying “wrestling training with former ECW wrestler Jason Rotanda”.

Livewire started off well in the early exchanges with taking Black over with several side headlock takeovers before Black overpowered Livewire and picked apart his opponent, tying him in a surfboard crosslock to inflict some punishment.

Black kept the pressure but Livewire fought back, it didn’t last long before a frustrated Black started laying in stomps and elbows before jumping up for a leg lariat. Both men had the same idea and knocked the other down with a clothesline.

Livewire hoisted Black over with a fallaway slam but couldn’t keep Black down. A swinging kick from Black was countered into roll up for another two. Black snapped Livewire’s neck on the top rope and landed a slingshot elbow drop and, with the aid of having his feet on the ropes, picked up the pinfall.

Another fairly decent match, I thought Nathan Black had a great look and one that was going to go far but alas not to be. I saw Livewire again years later in Buckie as part of United Pro Wrestling, then he was announced to be hailing from Buckie… handy that.

This was a historic moment, the first sighting of The Bulgarian Baker for my eyes. I wasn’t expecting such a legendary figure to be involved in this show much less in a championship match.

Musso coerced Branimir into putting his loaf of bread on the line in return for a championship opportunity, unfortunately Musso informed the baker that he intends in shoving the baguette up the Bulgarian’s arse… so that wouldn’t be fine.

The baker suffered embarrassment early on from a criss cross exchange that saw Musso slap the baker in the face, Branimir tried the same tactic but was met with a stomp to the foot. The baker gained the upper hand by throwing Musso off the top rope. The baker dodged a knee lift and booted Musso with ease.

The baker kept up the pressure with three nice leg drops, Musso fought back with clotheslines but got a low kick to the stomach after the baker wriggled out of a Blunt Force Trauma attempt. The baker missed a top rope leg drop which fired Musso up for a top rope elbow drop for another near fall. The Musso special combo facebuster and knee lift was another two count. The baker wiggled out of the Blunt Force Trauma again and hit a low blow to cause the disqualification.

The baker scurried away and brought back Nathan Black and Luke Windsor to attack Musso only to be ran off by Livewire and Euan G Mackie.

This would become the staple of the W3L events in Elgin the following few years, not only having The Bulgarian Baker himself but the set up of the main event in the first half.

As far as in ring goes, this was probably the best “wrestler” version of The Bulgarian Baker, future incarnations would lean more into the comedy side of things. Totally not a complaint, I love this sort of absurdity. What you will not have heard watching this back is myself shouting bread puns. The match was a really nice back and forth. Just straight forward good guy – bad guy stuff.

Bryden started with an early complaint about the inflatable hammers. Bryden tried an early sneak attack but he was sent all over the place with Hunter quickly took him down with a headscissor and arm drags to send Bryden to the outside to be met with an inflatable hammer attack from the children at ringside.

Bryden got the upper hand and rammed Hunter into the ring post by the stomach to slow him down. Hunter built up a head of steam but missed a top rope crossbody while Bryden quickly took advantage of, stomping away at Hunter in the corner before hitting a nice press gutbuster for a near fall.

The stomach was the point of attack with Bryden hitting several knee lifts before locking in an abdominal stretch, using the ropes to assist in the pressure. Hunter was able to hip toss out of the submission and started hitting drop kicks before spiking Bryden with a tornado DDT which was only saved by the ropes. A fake out crossbody block from the top rope looked to spell the end of Bryden but an eye rake whilst on the shoulders of Hunter gave Bryden the chance to hit a butterfly lock double knee facebreaker for the win.

A fantastic match, I didn’t remember it at the time but man Taylor Bryden and CJ Hunter put on an excellent display – plenty of action and some nice moves. I’m not a fan of the inflatable hammers, hated it then and still don’t like it know but thankfully it’s not used much nowadays in these W3L events, in Elgin anyways.

Set up in the first half, all the baddies from the first half face the good guys from the half take each other on in main event. The match started with a big brawl with Black and Branimir being throw into each other before Windsor felt the force of both his partners being thrown into him in the corner. The bad guys were sent to the outside and were swamped by inflatable hammers.

The match got going with Livewire and Luke Windsor starting in the ring as the chaos calmed down. The bad guys took over and cut the ring in half, figuratively, and took turns battering Livewire. Livewire made the tag but the referee was distracted by Windsor and Branimir and missed it. The baker tagged in, dropped the singlet straps, and slammed Livewire. Livewire hit a spinebuster on Windsor to create space which allowed Livewire to crawl over to tag in Mike Musso who ran riot.

All six men got into the ring, Musso and Livewire used Black and Branimir as a row boat but was broken up by Windsor who was on the receiving end of a diving headbutt to the… upper thigh(?) and a row boat stretch of his own.

Windsor, Black and Branimir were at a stalemate as to who got to hit Musso with the loaf of bread, which got torn in half in the process. Mackie, Musso and Livewire rolled up their opponents for the triple pinfall in a chaotic main event.

Windsor got a Rocker Dropper from Musso before being thrown out of the ring to the blood thirsty children ringside with inflatable hammers ready to assault… which they did in many numbers.

A really quick but crazy six man tag team main event to cap off the show. A fun night and a fine introduction to World Wide Wrestling League. It clearly didn’t put me off as I’ve been back every year since when W3L come to town.

It’s been nice to relive my first W3L event, a lot I remember like the inflatable hammers and seeing The Bulgarian Baker for the first time but I can’t believe I forgot about Taylor Bryden versus CJ Hunter which I would say was the best match of the night. Possibly it’s due to my own personal tastes changing over the years and the big comedy and shenanigan fueled capers was my usual bag but has since evolved to appreciate the in ring work more, I dunno, but it was a really good match that I’d recommend to revisit.