Not being a tattoo guy myself I’ve often wondered why people get ‘inked’. So as I cover art in this section on the SWN website I thought I’d ask.

Let’s invite my first guest into the tattooists chair. He’s says on his Twitter page that he’s “Pure Evil’s Incarnate” and that he’s “the Devil on Pro Wrestling’s shoulder.” Quite a claim. But without delving too deeply into his dark side I wanted to know more about the artwork on his shoulder for now. So “let a little bit of evil into your life” and let’s hear the stories Behind the Art.

Alastor Adams, welcome. Can you tell us what tattoos you’ve got?

All of my tattoos have been spaced out over the last 5 years, most recently being March this year before the world decided to end.” 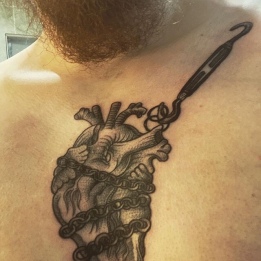 Oh and how. Haha. So you’re a big gaming guy then? Were the gaming tattoos your first tattoos? Were they what inspired you to start?

“I got my first about a month after I turned 18, which was my Triforce tattoo from The Legend of Zelda. I didn’t exactly have anything too meaningful in mind as I was still young, so why not go with my favourite game series!

I’ve always wanted tattoos for as long as I remember, especially being a wrestling fan, seeing guys like Jeff Hardy or Rey Mysterio made me wanna look cool too.“

Jeff and Rey are both very artistic wrestlers all round aren’t they? Both visually and through their performances. I can understand that… Who did your tattoos for you?

“Most of my tattoos have been done by different artists. Mostly here in Scotland, and a couple while I was in Turkey. I prefer to have a few different styles instead of being limited to one person.“

How long did they take?

“My Leo star sign was definitely the shortest at around 30-45 minutes, but my hourglass and skull was nearing 3 hours. I’ve never found the times too unbearable, and now I’m ready for some bigger, longer pieces!”

So for this interview I looked into the Leo star sign. Their element is fire. Their symbol is the Lion. Leo’s are ‘the kings and queens of the celestial jungle’ and their traits are being authoritative but warm hearted, creative and theatrical, vivacious, passionate and they love to bask in the spotlight. Does that sound like you at all? Is getting tattoos a form of theatricality or showing off or do you feel it is something more meaningful than that?

“I’d certainly say I fall into the creative, theatrical and passionate parts of a Leo. Theatrics is a lot of what makes up our great sport and well, its what I live for! I’m always trying to innovate, whether that be my in ring style, to my persona, its an ever evolving thing!

And of course, like I have previously mentioned, I am very passionate about many things, wrestling being a huge one.”

With Halloween upon us and with the obvious connotations, I’ve got to ask about the owl, and the skull and hourglass tattoos?

“So the Owl isn’t exactly super meaningful, I got it during a Halloween flash sale a few years ago. I didn’t actually intend to get it when I showed up, I had my eye on a cthulu design but someone took it before me, so the owl was my second choice. Funny thing is, when I was younger, I was actually pretty scared of owls, now I always have one with me!

As for my hour glass, The biggest hurdle with it, was sooooooo many people always get hourglasses, so I wanted mine to be different, so I decided I wanted something a little more gothic. Which is where I had the idea of having a skull inside and having the hourglass’s design be more old fashioned. Overall I just wanted something to represent how we all have limited time, and just blended that with my goth-y aesthetic.”

Just out of interest, I think I can probably guess but what was it about owls that scared you when you were younger? And getting a tattoo of one, was it like Batman and his fear of bats? He was scared of bats wasn’t he, so he became one, deciding to use his fear to instill the fear he had for them into the criminals he came across.

“Well when I was really young, I just found their stares really creepy, but eventually I got over it. That was until I had work experience during high school, where I went to work at a local zoo. Me and another kid were instructed to clean the owl enclosures… UNATTENDED. One of us had to clean, the other used a broom to hold back the very angry owls.

I suppose it is, funny you should mention that because there in fact is a version of Batman from a different universe known as Owlman!”

Oh yeah so there is haha… Jeez it’s no wonder you had a fear of them. I can’t believe you were left unattended. That’s just crazy, isn’t it? Unbelievable… ok, I’ve got to admit the tattoo that intrigued me the most is the heart and turnbuckle. Is that a special one? What’s the story behind that one?

“So I don’t wanna brag about it. But I’m super happy with my heart and turnbuckle tattoo as I think it makes me one of the few people in the scene with a tattoo linked directly to their place in wrestling.

I got it at a time I was gaining a little more traction in wrestling and my passion was building more and more, so in my heart I knew I wanted to keep wrestling, keep growing and keep doing more, so that’s when I decided. A lot of people say wrestling is in their blood, but for me, its directly locked in my heart by my own choice. That’s why I decided to go with the design of a turnbuckle locking around my heart.”

I must admit if I was to get one I think I’d have to have something similar myself. Are there any that you’ve seen that you admire or are jealous of?

“I’m jealous of anyone who has significantly more tattoos than me. I’m absolutely dying to get sleeves done and work on more of my body. But time and inspiration is needed, I’ll get there one day!”

Hopefully the whole world will get there one day and get back to normal soon. I wish you good luck on your tattooing journey. Alastor Adams, Thank you for your time.