It has been A While™.

While many promotions have already held a show(s) since tier zero (not Taylor Bryden) was announced, WrestleZone held back, waiting for the perfect opportunity to pounce with a truly class card. Where better for that to take place than the Northern Hotel? It’s the WrestleZone venue. The most pivotal moments in company history have traditionally taken place here, with the 2021 Halloween Hijinx looking to add to this list.

Every match graphic came with added excitement. This is WrestleZone’s first show since 7 March 2020 – they weren’t half-assing their effort. Just look at this main event… 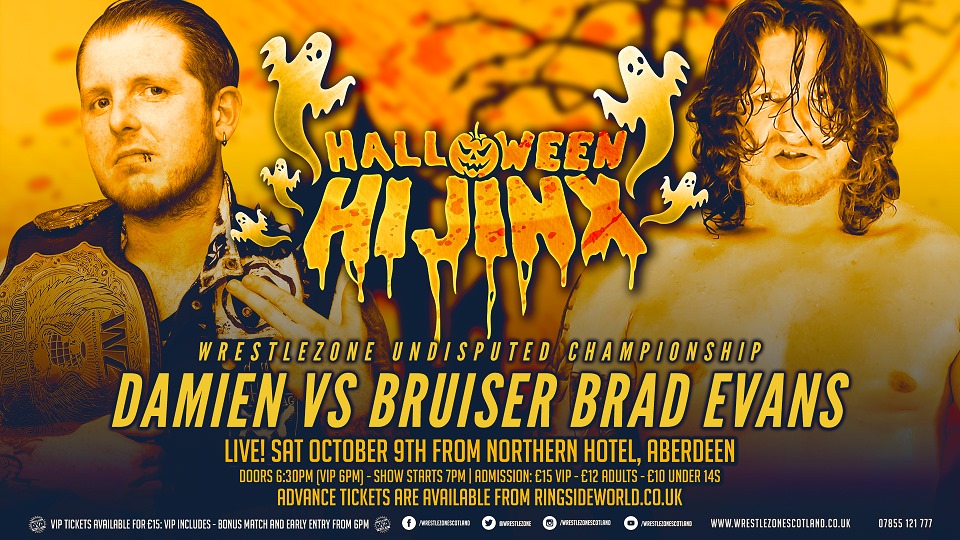 Okay, I’ll say it; Bruiser Brad Evans wasn’t my first choice for Damien‘s first challenger back. He wasn’t even my tenth choice. He’s earned it, though. He’s gotten into incredible shape throughout lockdown, he’s used every chance along the way to learn from some big names in the industry via Fife Pro Wrestling Asylum’s online seminars, and he’s got a new name to go with it aswell. For him to face Damien in his first official match in close to two years is almost a reward for his dedication while sitting at home. Damien, meanwhile, has been fairly quiet for the most part, which is an interesting strategy. We don’t know what he’s been up to, so there’s not much to comment on. It’s just going to be one of those matches where both guys just take lumps out of each other. Codebreakers countered into TKOs? Bring it on.

If there’s one thing I’ve missed more about WrestleZone shows than anything else, it’s God’s favourite champion, Captain Alan Sterling. The guy just gets it. Lord Alan Sterling? A hoot. Mixed Martial Alan? Delightful. Serious Alan Sterling? Scotland’s most underrated act. Captain Alan Sterling, however, is Scotland’s best all-round performer and I’ll say that until he retires. He has the comedy, he has the charisma to go with it, and when he does actually wrestle, he’s tremendous. Remember that DDT he used to use? A killer. Now he just has a hat and misses Swanton Bombs, but magically, he’s just as great to watch now as he was circa-2015. He faces Chris Archer on Saturday, with the Tri-Counties Championship on the line. The pair had some great wee fights during the Rejected/Sterling Brothers feud in 2017, so expect something similar here if Archer’s knees can withstand the walk up the Northern Hotel stairs. 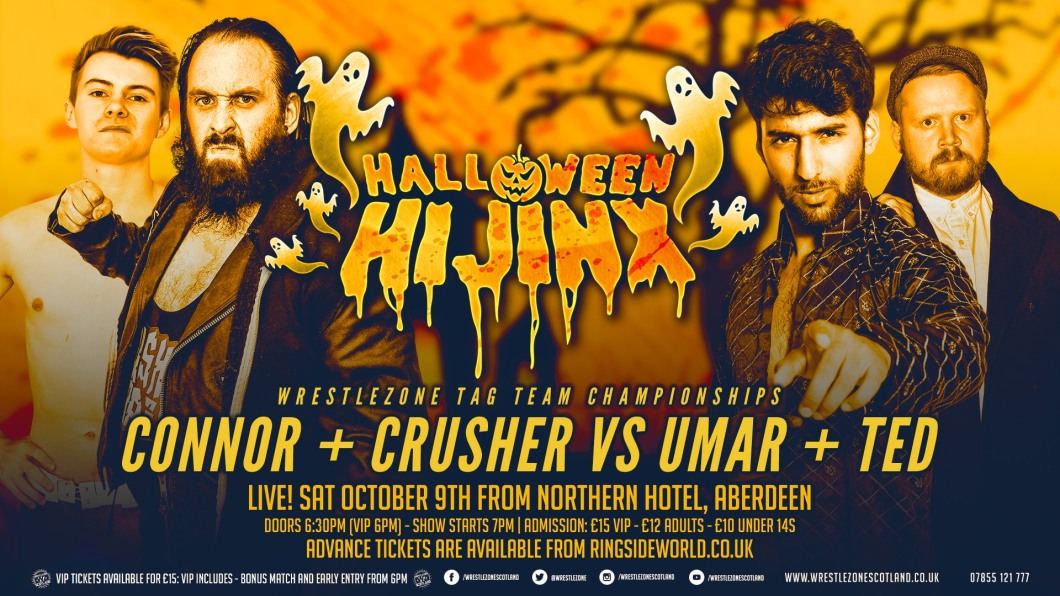 Crusher Craib and the recently-renamed Connor Molloy have an intriguing first Tag Team Championships defence on Saturday, facing the unique pairing of Umar Mohammed and the Outfit’s Ted O’Keefe. Dino Del Monte is reportedly attending to other business, but don’t you worry, Outfit fans; Umar will give him the title should he and Ted end the reign of Connor and Crusher. Connor and the lovely, lovely Crusher Craib (© Mikkey’s Mosh Pit, 2021) didn’t really get going pre-COVID, having won the titles from Blue Thunder and William Sterling during WrestleZone’s third-last event before y’know, everything shut down. They are, however, an interesting pairing. You’ve got the fiery babyface aura of Connor matched with the big beef of Crusher; there’s real Team Hell No vibes to them. They’re going to be champions for a long, long time, as if they haven’t already. 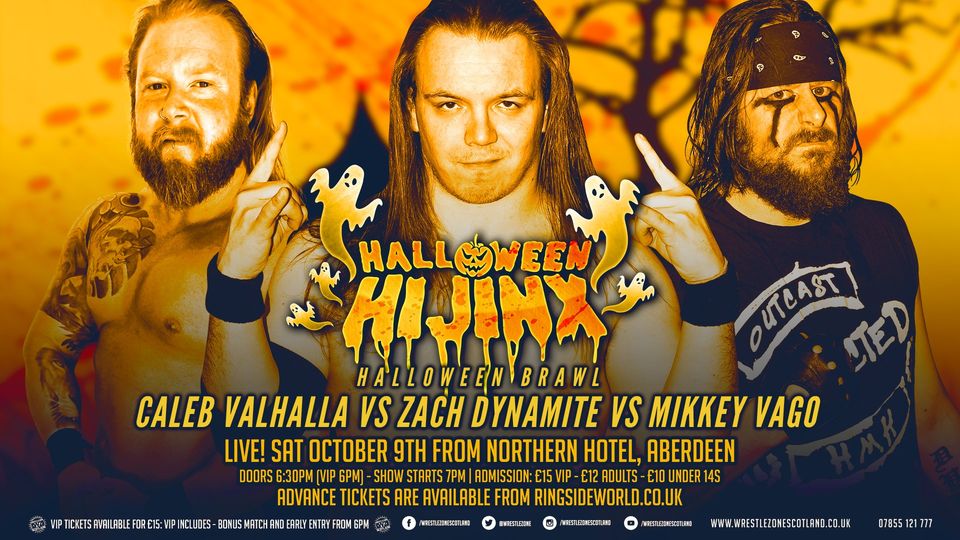 Everyone loves a Halloween Brawl. Originated at the 2016 Halloween Hijinx with the epic Cysto vs. Lord Mr Malice vs. Super Executioner battle for the ages, it’s since taken on a more serious tone, seeing intense fights involving Scotty Swift, Johnny Lions, Aspen Faith, and others. This year sees Zach Dynamite, Mikkey Vago, and literal Norse God Caleb Valhalla colliding, with Dynamite the only previous Halloween Brawl winner in the match. When Vago partook in the match in 2018, he dropped the Tag Team Championships. While Valhalla is yet to wrestle the stipulation, he is reportedly still wanted by Northern Hotel security for attempted murder. Though it’ll mainly be goofy weapons involved in the match – pumpkins tossed off the cock and balls, LFG – Caleb is a feared man with a weapon in his hand. WrestleZone management seriously have it in for Dynamite and Vago…

Shawn Johnson vs. Bryan Tucker, the feud that will never die, rolls on at Halloween Hijinx, with Len Ironside due to officiate their lumberjack match. When this was announced, I jumped to two conclusions; it’ll start the main show so everyone can get an equal pop as lumberjacks, and something will happen. It’s a lumberjack match with a guest referee. Though it fits the story perfectly – Tucker has a history of running away from Johnson, while constantly being a pain to WrestleZone management, particularly Ironside – it very much feels like this is being set up for some sort of moment. It’s the return show; you want it to be remembered for these moments we always talk about, even if the match will be a banger anyway. 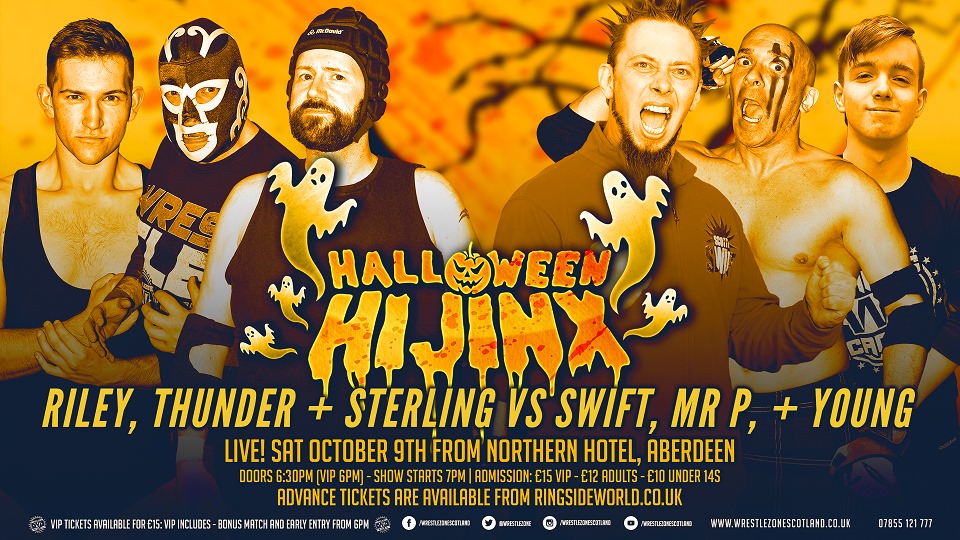 Oh, it’s a big one, a big ol’ six-man tag team match complete with a debut in Evan Young. The WrestleZone Training Academy graduate was due to debut in the 2020 Regal Rumble match, ultimately being cancelled with less than a week to go. He’ll finally get that chance, though, teaming with Scotty Swift and Mr P to face Blue Thunder, William Sterling, and Ryan Riley at Halloween Hijinx. It’s a unique match, to say the least; Swift and, presumably, Thunder will have helped in the training of Evan for the past few years, so there’s that, plus it continues the never-ending story arc between Swift and Sterling. They’ve been inseparable since day one. It’s a match that’s going to work no matter how awkward it may look on paper.

Miracles really do come true. Lord Mr Malice, your idol and mine, returns to the scene of the crime, the Northern Hotel, which, much like Damien, has seen both the best and worst moments of his career. He kicked Jay Lethal out of the 2014 Regal Rumble match, before he, too, was eliminated from the 2019 incarnation of the bout by Caleb Valhalla. The thud of Malice’s body hitting the floor still rattles through my brain to this day. There simply wasn’t a need, but that was the moment Caleb Valhalla was established as this beast of a man that can make even a simple wristlock look like a killer move. Malice has since been resuscitated, offering an open challenge for the VIP ticket holders bonus match at Halloween Hijinx. It’s a bit risky of WrestleZone to put the main event on the pre-show, but hey, maybe we’ll get a cheeky Lord Michael Of Graham return.

Tickets are now sold out. There’s none left. Not one. Sorry. Doors open at 6pm for VIP ticket holders and 6:30pm for general admission, with the main card kicking off at 7pm, and yes, it feels weird to be typing that out again. Saturday can’t come quick enough!