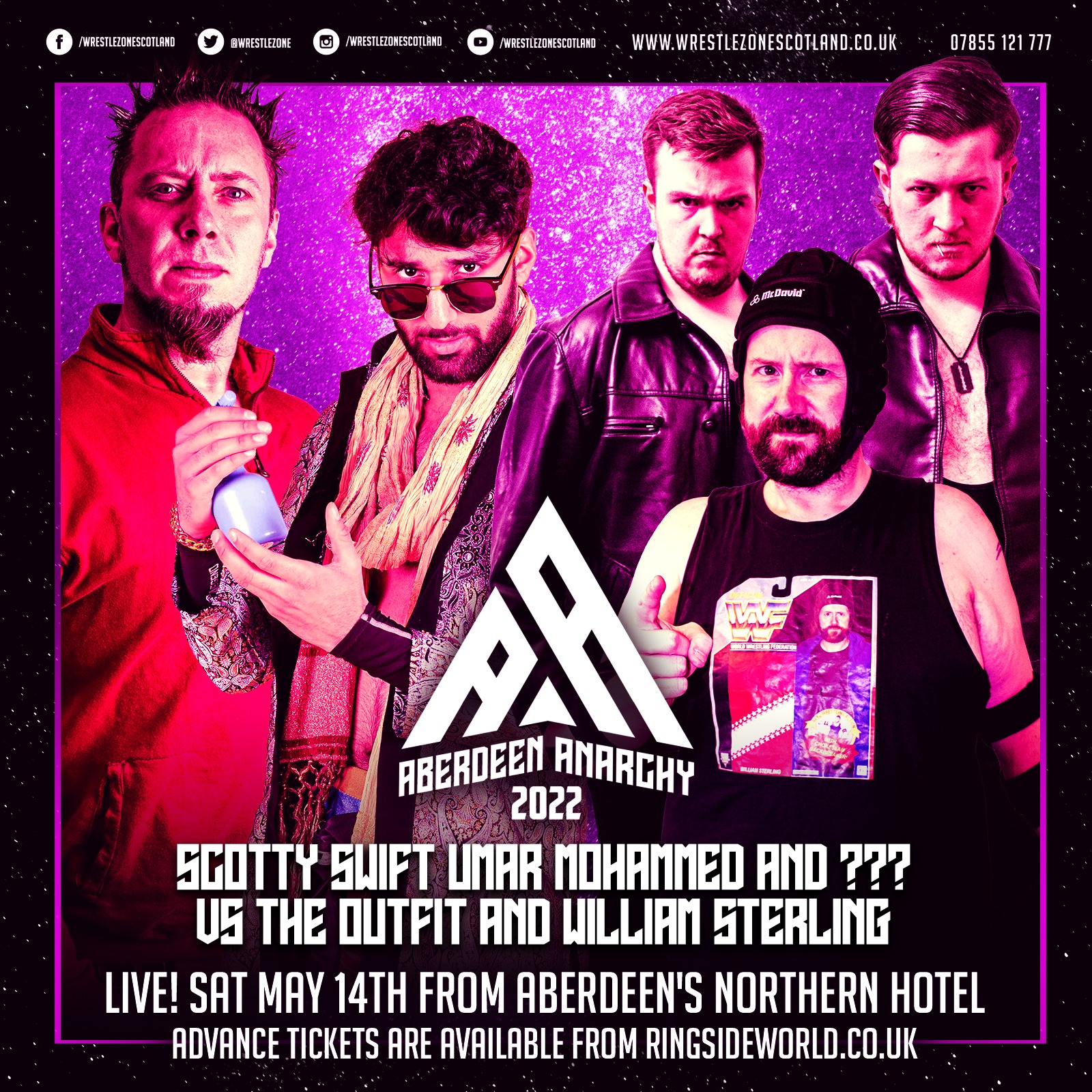 The unfortunate news of an injury to Lee McAllister has opened up a spot in his scheduled Aberdeen Anarchy six-man tag team match alongside Scotty Swift and Umar Mohammed against The Outfit and William Sterling, with that match now moved to Battle of the Nations in August. Who, exactly, replaces ‘The Aberdeen Assassin’ remains to be seen, with Swift and Mohammed promising a surprise partner come 14 May.

If there’s anything SWN Towers loves more than Aspen Faith, lords, and Scotty Swift vs. Super Executioner matches, it’s poorly predicting all things WrestleZone. So, who is the third man joining Swift and Mohammed on Saturday evening?

Look, I know what you’re thinking; Johnny Lions doesn’t want to come out of retirement because he doesn’t want to ruin the sendoff he received at Christmas Chaos 2019. But it would just be really nice if he did. Johnny is already going to be in attendance at Aberdeen Anarchy as he serves as the guest referee for Bryan Tucker vs. Evan Young, so it all makes perfect sense. No wrestler ever stays retired. I’m not asking Johnny to become the Terry Funk of WrestleZone and come out of retirement every few months, but a formation/reformation of The Sensational Swift Lions would just be lovely.

Were you in attendance for the pre-show to Halloween Hijinx last year? Then you’ll have heard the insane reaction to the surprise return of Bingo Ballance as part of Lord Mr Malice’s open challenge. The WrestleZone fans adore him, and rightly so. He’s a breath of fresh air every time he competes in WrestleZone (and I assume everywhere else he’s competed throughout his career). To put it simply, Aberdeen Anarchy isn’t the same without ‘The Zenith of Zero-G’; he’s faced Stevie Boy Xavier, Chavo Guerrero Jr., Lionheart, and a plethora of homegrown WrestleZone names at the event. He’d be against three big beefy boys in Dino, Murphy, and William Sterling, so I just think he would be a really nice addition to this already-stacked card.

I’ve done some actual research for this (i.e. scouring his social media channels) and from what I can gather, Andy Wild has a rare weekend off for 14/15 May. The reigning UEWA European Heavyweight Champion would no doubt be welcomed back with open arms if he were to appear at the Northern Hotel, having not appeared for WrestleZone since before the pandemic. If you recall, he was due to team with Scotty Swift, Damien, and Chris Archer against Zach Dynamite, Ryan Riley, and the original version of The Outfit at the 2020 Regal Rumble, so think of this as him following through on aiding Swift in his fight against The Outfit (plus Andy Wild vs. Dino? Ooft!).

The same goes for Grado. He doesn’t appear to be booked this weekend, but you can guarantee an enormous reaction if he were to surprisingly appear at Aberdeen Anarchy. Grado has an impressive record at this event, having gone undefeated until the 2019 instalment, losing to Captain Alan Sterling, but he’s previously been victorious over some heavy hitters at the event, including Andy Wild, Sha Samuels, and, erm, oh yeah, Scotty 2 Hotty. He seems the perfect choice, being a huge draw within British wrestling and having the charisma to go alongside Scotty Swift and, specifically, Umar Mohammed. Honestly, I don’t know if I want to see this more just because it’s Grado or if it’s because I want to see him wearing a Kameez.

Just to pop a handful of people, really.

Who’s your pick to team with Scotty Swift and Umar Mohammed at Aberdeen Anarchy?