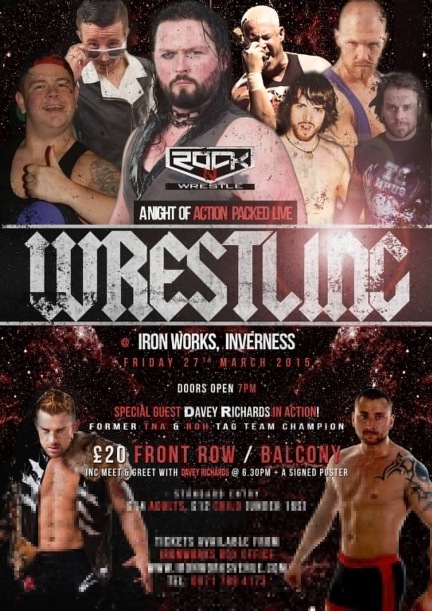 Rock N Wrestle returns to The Ironworks for another star studded affair, featuring Mr Anderson, Davey Richards and Angelina Love from TNA. Let’s have a look at what has been announced so far;

I saw Lucy at the Rock N Wrestle show in Forres last year and she impressed in a strong showing against Carmel. Now it’s over 5 months later and we’ll get to see how much Lucy has grown in that time. She’ll have a bit more speed over the taller Love but experience goes into the camp of the Canadian. Cole will have her work cut out against the former Knockout Champion.

Gradomania returns to The Ironworks and he faces former favourite turned villain Davey Blaze who will have his weasel of a manager, sorry, Manager of Champions Charles Boddington in tow. Shenanigans aplenty in this. I predict a baldy chant, it’s a favourite when ol’ Charles Baldington is in Inverness. I like the aggressive, ill-tempered Davey Blaze so hopefully there is more of that than just comedy spots.

Read the full story of how this came about.

If Switch wins he gets to feast upon Toby Michaels. I’m not entirely sure what that means and I’m not entirely sure I want to know. Last time at The Ironworks, Crusher defeated Switch with one boot to the face after answering Switch’s open challenge. I would expect to see Switch have more offense but Crusher is a big tall dude with a big boot. The Creator of Carnage doesn’t get paid by the hour.

I’m looking forward to this one. I have been a fan of Mr Anderson for a long time since Mr Kennedy…Kennedy debuted on Smackdown all those years ago (just went on Wikipedia, 2005, wow). So getting to see Mr Anderson in the ring will be a great thing for me personally. He faces Kid Fite which is the perfect opponent. I had two choices in mind for Andersons opponent, the first being Liam Thomson and the second being Kid Fite so happy with this. I expect this to be a great match, it’s two of my favourites so I would mentally have a high expectation.

Eight man warfare with someone the best in the country colliding along with veterans and fresh faces. A good mix of styles. Sharp and Donnie have beef from the Forres event when Donnie was fed up of Sharp’s antics and having fun. Joe Hendry makes his debut for Rock N Wrestle, one of my favourite wrestlers right now so have high expectations on this match. It’s going to be wild one.

Christ on a cracker, here is an electric bout featuring four lightning quick guys. BT Gunn and Davey Richards were in the main event of the first Rock N Wrestling in The Ironworks back in October 2013. BT Gunn and Stevie Xavier, of course, are no strangers to each other as part of the highly successful Just Uz. This will be a blink and you miss it style contest with so much going on it’ll be hard to keep up. BT Gunn narrowly missed out on Jesters title in Forres in February while Kenny Williams lost in the final of the title tournament so both will have a chance to get back into the hunt. Can’t dismiss Stevie Xavier, though known as a highly rated tag team competitor, he has the skills to get it done in singles competition. The elephant in the room here is former Ring of Honor World Champion Davey Richards. A world travelled competitor well versed in tag team and singles action. Four highly respected and highly revered wrestlers, whoever wins this one will give whoever the champion is a run for their money.

Jesters second title defence sees him take on the special guest referee from the tournament final that saw him win the title, Lionheart. Lionheart just returned to in ring competition this month after a broken neck forced him to sit on the sidelines. Jack Jester has already turned back the challenge of BT Gunn in Forres and this will be a different, yet tough, challenge. Both of these men, along with BT Gunn are trainers at GPWA so will have a familiarity with each other and know a bit more about the others strengths and weaknesses. If Jester starts on the offensive early and works the neck of Lionheart it might be a quick contest. However, as Lionheart says he’s unbreakable. This will be a treat for the Highland fans.