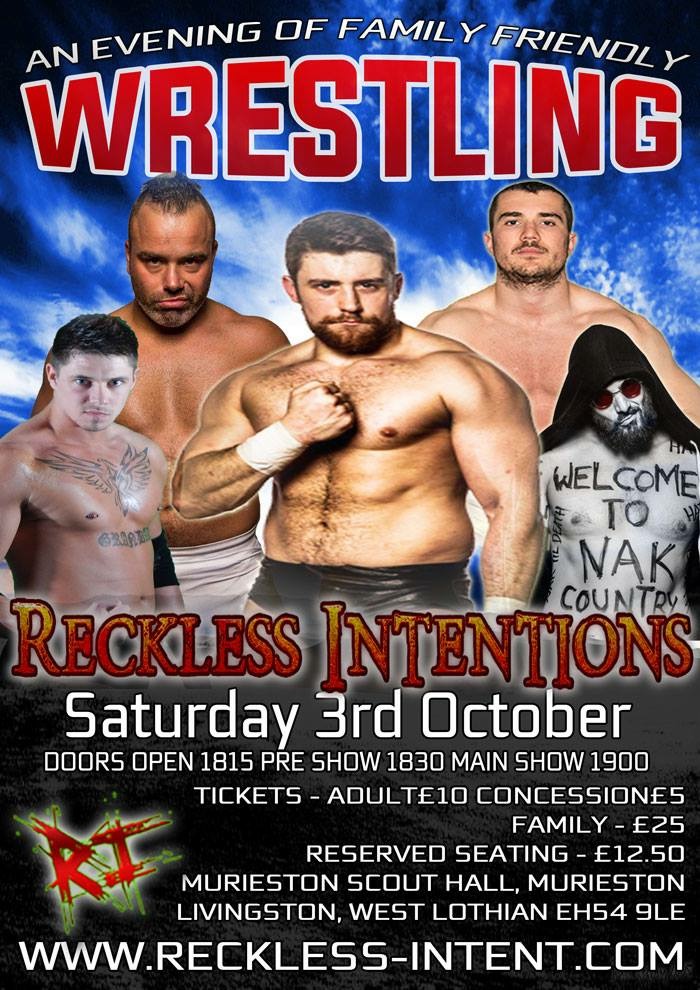 Reckless Intent return to Murieston Scout Hall for Reckless Intentions as they are on the road to The Reckless Rumble. So how was the show? Well I’m about to tell you!

Chaotic opener with Dayre, Rawlins and Mills all throwing themselves over the top rope onto Roberts, Jam and Wee Jimmy. Mills and Jam continued their feud by focusing on each other. Hilarious moment when Jam stood behind Wee Jimmy when he was aiming to hit Rob Mills with a chair, only for Jimmy to raise the chair behind him and plonked O’Malley much to the laughter of the crowd. Rob Mills took advantage by throwing Jam into one of the doors to eliminate him. Rob Mills was next to be eliminated by a Rawlins t-bone suplex which looked painful. Rawlins invited Bobby Roberts to the ring where he and Delsin Dayre used their tag team offense to ground the big man. Roberts avoided a Dayresault, throwing Dayre into the ropes causing Rawlins to fall from the top rope, clipping the door enough to register an elimination. Roberts finished in dominating form by spearing Delsin Dayre through the remaining door to win the One Stop Briefcase.

Ring announcer, The Grue, bumbled his way through opening the mystery door prizes.

The action was solid, but the presentation was a little flawed. It isn’t a good start when the ring announcer can’t read the rules, or remember the rules. The parts with Dayre and Rawlins teaming up against Bobby Roberts were great but overall little to write about.

Joe Hendry entered to open the main show, he advised the fans that Darkside wasn’t here tonight so he was without an opponent. He apologised and exited the ring, only to be blindsided Joe and cashed in his One Stop Briefcase. Roberts landed a big spear for only a two count. Hendry countered with a clothesline and a fallaway slam to retain his title.

Our first real match saw Liam Thomson make his debut for Reckless Intent against the RI Original Rawlins. Thomson stalled getting into the ring, riling up the fans. They finally locked up with neither getting an upperhand as Thomson took a break to the chants of “chicken”. Rawlins was working to lock in the crossface but Thomson took a short cut with a low blow while the referee was distracted and a backstabber later saw Rawlins down for the three count.

A very balanced match between these two, Rawlins and Thomson worked well together, could see a rematch down the line between The Baddest Man and the Bad Boy. A solid opener to the show.

General Manager Jason McKinley was out next to introduce the next match as it was a big one, Scott Renwick and Darren Lewis were putting their careers on the line in a Last Man Standing Match.

Renwick got a big reaction. Darren Lewis entered with his Sons of Silence cohort, Graeme Leask to resounding boos. The crowd in the Murieston Scout Hall were firmly behind The Butcher. Lewis tried to stall but Renwick took it straight to The Superstar, throwing himself through the ropes for the suicide dive.

I then lost sight of them as they’d left the ringside area. All I could hear is bangs and “oohs” from the crowd. Lewis eventually brought Renwick back to the ring and I could see again. Scotty fought up but Lewis picked him up for a big impressive looking powerbomb for a count of 6. Lewis tried to introduce a sledgehammer but Scotty narrowly avoided it. More brawling on the outside and into the ring. Lewis hit a muscle buster, which again looked really impressive. Chairshots were swung, Renwick hit his double underhook facebuster as the crowd willed on The Butcher. The two just threw everything at each other before leveling each other with a simultaneous clotheslines for the 10 count.

Lots of brawling in this one with both using a last ditch clothesline with neither gaining the upper hand. I don’t know what to make of this as it big brawl as it should be with a personal match but it seemed to lack a killer edge I’d expect for the stipulation, I’d have thought Graeme Leask would’ve been a factor as he was out with Lewis. Poor show on the crowd for laughing at Scott Renwick’s promo after the match for calling Darren Lewis his brother.

Both showed respect to each other after the match by shaking hands in their last ever match for Reckless Intent.

There was nothing bad about the match, just felt that there was something missing.

I was really looking forward to this one. Two high flyers, ready to take risks to entertain. Technically this one would be for the Hardcore Title since Dayre won the title in the pre-show Mystery Doors match. Slow start with each trading headlocks and counters. Feeling each other out before the fun begun, both hitting lovely dropkicks and an array of flips to show off how athletic both are. Great stuff. Fun spot with LJT running the ropes and stepping on Dayre as he was trying to get up several times. LJT hit a Chaos Theory then a snap suplex rolling into a front Dragon Sleeper which looked very good. Dayre used his power to try and wear down LJT. LJT countered a spin out slam into a crucifix pin which looked great.

There were lots of great moments and counters but I feel like they weren’t stitched together, I think it needed a story, or at least an antagonist for the hero to defeat. The crowd were behind both but there was a large LJT fan base there. Would’ve liked to have seen Dayre get a bit more aggressive to play off the fans getting louder for LJT. Dayre finished off the match with a spin out flatliner.

Overall the match was good, just needed a story, especially when these two are so talented.

After the match Wee Jimmy got into Dayres face allowing Jam O’Malley to low blow the Hardcore Champion and level him with a couple chair shots for an easy pinfall to regain the Hardcore Title. Rob Mills came out after the “match” to chase off O’Malley.

With every Reckless Intent event I watch, the more I want to see Jam O’Malley get his comeuppance. He keeps losing the Hardcore Title then getting it back on the same night. I just want to see someone get a decisive win over the Handsome One.

Another match I was really looking forward to, Stallyon started off by jumping the Sunday Slam Wrestling Champion only for Doros to fight back with ferocity. Doros took it straight to Stallyon with his inexperience being his downfall as Stallyon waited for a mistake to take advantage. Stallyon punished Doros as the crowd got behind Theo. Stallyon cut off any comeback the smaller Doros could manage. Stallyon tortured Doros with a surfboard only to have Doros shift his weight to pin Stallyon in a great little moment but it was only good for a two count. A top rope back suplex countered into a crossbody was another close two count for Doros. Doros got the victory following a neckcrank onto his exposed knee.

A fine match with plenty of story, a big win for Theo Doros over the more experienced Stallyon. Doros looks to be getting more confidence in the ring every time also and I can see him being a big part of Reckless Intent in the near future.

The biggest match on the event with current UK Champion Chris Renfrew facing Michael Chase. A tussle started off the main event with Renfrew clearly having an issue with his recently healed hand. Chase noticed this and aimed to stomp on the hand with Renfrew avoiding it. His luck run out as Chase honed in on the arm and aimed his offense onto the weakened body part. Chase would still try and get the crowd into the match by clapping but his offense was more aggressive as time went on to take shots at Renfrews arm which was great. Renfrew narrowly got to the ropes following a hiptoss/armbar combination. It took four Stoners to finish Michael Chase, the third being a springboard counter. The final was “outta knowhere” for the three count.

This had everything that I felt many of the matches on the show lacked. The crowd were into everything, they used Renfrew’s recent hand injury to add a focal point, lots of good moments to build up the match with layers. My only little gripe was that the Stoner was used a lot.

After the match Chris Renfrew got on the microphone to announce that BT Gunn was coming to Reckless Intent to face Joe Hendry at The Reckless Rumble to a huge reaction.

Overall: I found the overall show fine. There were glimmers of really great moments but no particular match was standout as brilliant, just lots of solid matches. The main event was a particular highlight of the event. The Reckless Rumble is shaping up to be a really great show so I’m certainly looking forward to watching that.