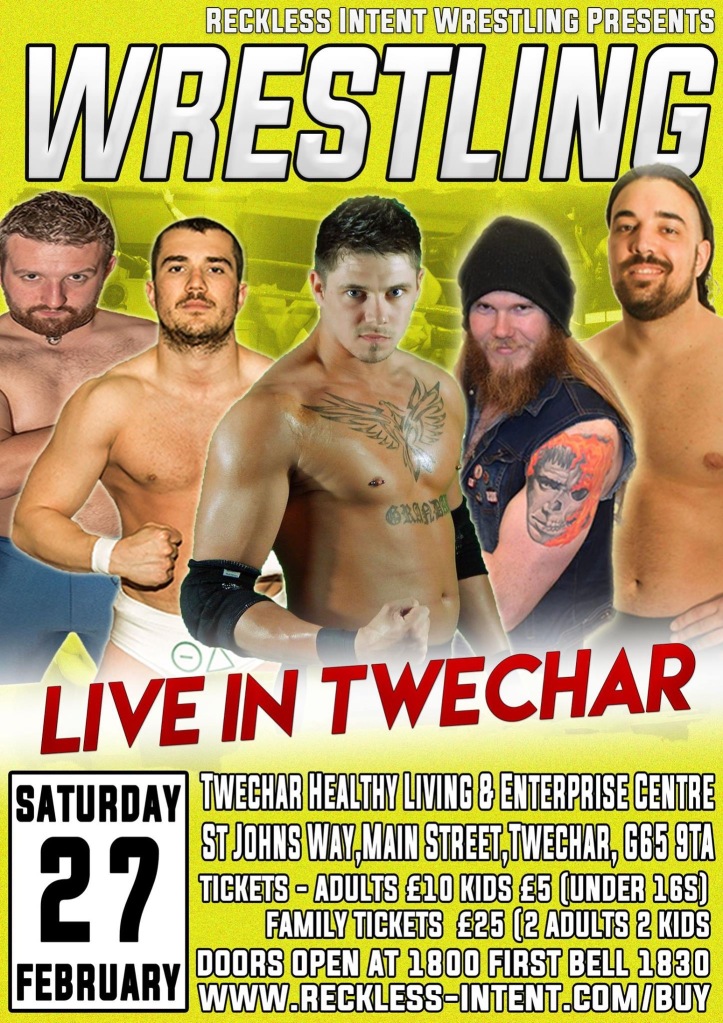 Reckless Intent make their way to Twechar for the first time on February 27th as they continue to expand outwith West Lothian. A showcase of local wrestling talent is on offer and what a showcase has been put together. A grudge match, a return and a championship match OH MY!

The big news coming into this event is the showdown between former tag team partners Delsin Dayre and the recently rechristened Sean Mercer (formerly Rawlins). A successful team in Reckless Intent as The ComixZone has seen a dark turn of events as Mercer turned on his partner after a hard fought loss to Italian Stallion at Reckless Intent 4. The former Reckless Intent Champion looks to have had enough of Dayre and is going to unleash the monster. Mercer wasn’t called “The Baddest Man in Professional Wrestling” in Reckless Intent for nothing, he was known for being ruthless and aggressive whereas The ComixZone alter ego was all about having fun. It’s certainly going to be a tough night for Delsin Dayre who is facing an animal who knows all Dayre’s moves and will have a countermeasure for each.

Tom Fulton is travelling through time to come back to 2016 and is facing Rob Mills. Mills has had a lot going on in Reckless Intent with his on-going quest to finally dethrone Jam O’Malley as Hardcore Champion on the back burner momentarily he faces the veteran in what will be a learning curve.

“The International Sex Hero” DCT returns to Reckless Intent in a match that may be too manly for those in attendance. He faces off with “Handsome” Jam O’Malley. The testosterone levels will be at an all-time high and if only one person leaves pregnant then I think we’ll just be lucky. O’Malley has been out to take over Reckless Intent and has been on a mean streak over his Hardcore Championship. DCT will have to keep his wits about him as Wee Jimmy won’t be far away causing trouble.

Sunday Slam Wrestling Champion Theo Doros faces Scottish wrestling veteran Eric Canyon in one of his toughest tests. Having already been in tough battles in Reckless Intent against some almighty challenges none more than Eric Canyon who is a no nonsense machine and will have to have everything thrown at him, something Theo will only be glad to dish out.

New Reckless Intent Champion, Michael Chase faces current RI UK Champion Massimo in a Champion versus Champion match that will have all eyes on it. Massimo, having aligned with O’Malley and Stallyon, will have plenty opportunity to take advantage of distractions if either get involved. After a big win over Joe Hendry at Reckless Intent 4 to win the title, Chase will still be on a high with plenty of momentum but Massimo will be hungry and with his recent taste of gold in Reckless Intent he will be out to defeat the RI Champion and jump to the front of the queue for a title shot.

On February 27th Reckless Intent Wrestling arrives in Twechar for their debut show in the Twechar Healthy Living Centre for a night of live family friendly professional wrestling.

A great night out for all the family featuring some off the biggest stars in Scottish wrestling including Michael Chase, DCT, Delsin Dayre, Theo Doros and Reckless Intent UK Champion, Massimo Italiano.

There will be tickets available on the door on the night.