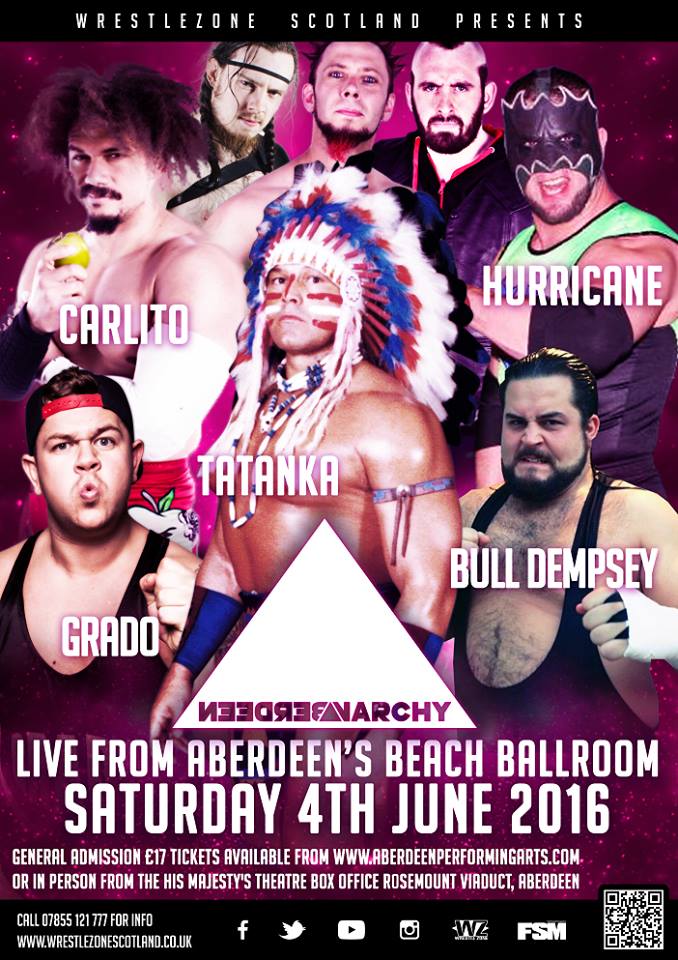 Check out the preview if you want the backstory to what was about to happen.

Four years, four events at The Beach Ballroom and four sell outs. An incredible achievement, over 1300 fans filled the venue ready for a packed night of wrestling. Special guests aplenty and the promise to make history. It did just that, with a night full of highlights, how was the overall show? Well I’ll tell you.

This review will include plenty of mini clips from Kyle (@_dec0y). Highlighting some of the amazing moments from the event.

The meet and greet beforehand was once again a very well organised and calm affair, in-meet the wrestlers-then leave. Easy as that. When the promotion has an audience of over 1000 people coming to the event it’s easy for something to fall apart. The team at WrestleZone always keep everything ticking over nicely which is one of the major positives that keeps me coming back.

I didn’t have a VIP ticket so was in Frankie and Bennie’s eating a Mac N Cheese Calzone and didn’t see this match. We’ll move onto the main card.

A huge match to kick off the show with a multi-man ladder war between six of WrestleZone’s finest. This match had the opportunity to surpass what came before them, considering this was only the second ladder match in WrestleZone history. Personally, I think it did. A highlight reel of action and painful moments. Even Richard R Russell wasn’t safe from receiving a huge Lion Cutter after Johnny Lions pulled him off a ladder. A moment that looked incredible. Everyone in this match worked their backsides off and took some huge risks.

I couldn’t begin to describe everything that happened but this is one match I’ll be replaying when the DVD comes out. The match ended with Alan Sterling holding the contract above his head after knocking down Kaden Garrick with an eye poke. An amazing match to kick off the event.

STV’s weatherman Sean Batty introduced this match, his involvement in the show was for the STV Children’s Appeal, with the STV camera’s on, it was only fitting that it captured one of the best matches in WrestleZone history.

The crowd loved Viper and took to her straight away. One of the great parts was that they were WRESTLERS. Not man versus woman, this match was between four WRESTLERS. The action was like four artists creating a masterpiece on the canvas, with this being the final showdown between Faith and Girvan they went all out. Aspen Faith hit a moonsault, he hit the canvas after Girvan moved, but the attempt was wonderful to watch.

Viper and Sammii were no slouches, they hit hard and the excellent finish was down to them.

An incredible (there’s that word again) match that just showed what you expect when coming to Aberdeen Anarchy, to WrestleZone in general.

A rematch from the first Aberdeen Anarchy to take place at The Beach Ballroom and considered the greatest match in WrestleZone history so there was a tonne of pressure before the match even begun.

It started slowly but heated up with plenty of quick counters and inventive moves. Both have grown a lot since their first match against each other and it showed with the pace slowing down in parts as the combatants were showing their brains trying to catch the other off guard. A great storytelling point.

Was it as good as their first encounter? No. Was it a great match? Yes of course. The twisting neckbreaker from the top rope from Bingo onto Stevie was a fantastic high risk conclusion.

Next up was the first of the special guests, Tatanka, taking on The Beast of Belfast, Damo. This was a slow one, which I had trouble getting into. Tatanka looked impressive hitting a suplex on the Irishman. Damo was entertaining as a cowering baddie which is some task when you are a huge hairy man mountain.

It wasn’t a match for me but it was fine and the crowd enjoyed it.

This was a grudge match which actually was fought like a grudge match. Bryan Tucker debuted a new, unhinged, look and wasn’t about headlocks. Near the start, Tucker hit a snap suplex on the stage only to see himself getting pushed down the entrance steps. It was a wild and chaotic match from the get go.

Tucker scored a quick roll up to gain the victory but Shawn Johnson was the one to have the last laugh by battering Tucker with a steel chair and adding further insult with a headlock driver onto the chair for good measure.

The Rejected and Lou King Sharp entered wearing ‘1 – 0’ t-shirts which was a delightful touch as they were set to defend their Aberdeen Anarchy streak against a huge team of former WWE Superstars.

This match was all about ‘Nugget’ Lou King Sharp. The smallest man in the match but with the biggest character. His interactions with his opponents was a showcase of facial movements and acting in the highest degree. Before the match though, the naughty Americans…and Puerto Rican used some unsavory language which I cannot repeat here…(it was the ‘B’ word and the ‘S’ word.)

They mocked Sharp’s manhood…or lack thereof which set ‘Your Mother’s Favourite Wrestler’ into a rage.

The majority of the match was Sharp and The Rejected avoiding their opponents in varying ways and using sneaky tactics to take advantage.

Sharp took the brunt of the punishment with chunks of apple in the face followed by a backstabber from Carlito, chokeslam from The Hurricane and a seated senton from Bull to round off proceedings.

‘The Greatest Streak in Professional Sports’ was now over. History had been made.

The build up video package painted this as a tense encounter, which it was. Crusher punished Swift and it looked like he was going to make good on his promise to end the Era of Scotty Swift. Swift wouldn’t stay down, no matter what Crusher would do he couldn’t keep him down. Swift came close with a Bossman Slam of his own after countering Crusher’s signature move. Both men used all the moves in their arsenal, and some moves in their opponents, but neither would give up.

The battle went to the outside where Martyn Clunes got wiped out when Swift dodged a charging Craib and ended up running right through the ring announcer. While officials were attending to Clunes, Crusher slammed Swift with a sit out powerbomb for a close two count.

The match ended abruptly when Crusher missed a top rope splash and Swift covered him for a three count.

As Swift quickly celebrated his win, and the continue of his own Aberdeen Anarchy streak, he exited quickly to allow medical attention to come to ringside as Crusher was barely moving.

It was heartbreaking to see Crusher getting helped by medical staff as he was clearly dropping weight and getting into great shape. The match itself is one of the best I’ve seen from him since his match versus Jack Jester at the 2014 Anarchy. Hopefully this won’t be his final moment in WrestleZone.

Overall: A great night of wrestling, to be expected at this point but nothing beats it. It wasn’t perfect, some things I wasn’t a fan of, but for those things I didn’t like there were hundreds in the crowd that did. That’s the important thing, WrestleZone craft a show that has a moment, a match, for each and every one of the 1300 in attendance. A moment that they won’t forget and give them a reason to return.

Four sold out shows is proving that WrestleZone are ruling the North East, they consistently put on an experience like no other. The exclusivity of their core roster is also something of interest, guys like Scotty Swift, Mr P and Alan Sterling are three of the best in country from an entertainment standpoint. It’s the home promotion of ‘The King of Catch’ Aspen Faith, who constantly puts on fantastic matches.

I would recommend checking out WrestleZone, whether it’s Aberdeen Anarchy or any of their other events in the Aberdeenshire area.

Thank you WrestleZone. You always gives us something to remember and an unforgettable show.

Let’s see how our predictions did…

For folk that think they’re in tune with wrestling and have a good idea of what is happening, our prediction skills are downright awful. Aberdeen Anarchy is unpredictable and I think we’ve proved that.

Check out Adam’s review of the show here.