A lot of people within W3L are aware that I am often entrusted with driving the ring van, which is essentially a Luton van that we put all the pieces of the ring and equipment needed for the shows in. It is a bittersweet affair, as it saves a lot of mileage on my own vehicle, but it often sees me being the first one to leave my house and the last one to get home after the show. For the sake of “kayfabe”, I have tried to avoid detailing this as I have often been perceived as a posh Englishman, but to be honest, it’s 2016 and the fact I often drive the ring van for W3L is a vital part of the story I am away to tell.

This particular show day was on 16th July, with a Gala Day in Falkirk and a town show at the Southside Community Centre in Edinburgh taking place. I was booked for the gala day, which meant us using what is known as “the older of the two rings”, which is a very heavy, rusty and old-school British ring that has to be picked up from Dalgety Bay. I was travelling with Kevin Williams, who on his Pokémon Go escapades, found a Geodude on the dashboard of my car. Given the fact Geodude is a Rock-type, I suggested to the leader of The Gamer Club that he nickname it Dwayne. Whether Williams smelled what I was cooking with that suggestion remains to be seen, but I since found one of my own and called it Maivia. I haven’t made Maivia battle yet, but I can imagine him being a real blue chipper.

We were using two van hires in Rosyth, one for each show. Sadly, the one for the Edinburgh show fell through and we managed to book an alternative one in Dundee. However, this was outlined when we were in Rosyth and meant that instead of being on the gala day show, I would now be on the Edinburgh show and required to drive through to Dundee to pick up the new van, help load what we needed from W3L HQ and brave Edinburgh traffic to make it to the Southside Community Centre.

I was happy that we were able to organise an alternative van hire on a Saturday, but it did mean my shift would be different to what I was expecting. Dave Jeremi replaced me as van driver for the gala day and Kevin Williams was left outside of the van hire with a load of crash mats as he waited on Dave and I bolted down the A92 en route to Dundee!

The Southside Community Centre is arguably the most difficult W3L venue to load the ring up and down, as it involves very narrow stairs, an almighty discrepancy for any ring job that involves heavy ring posts and long beams. However, the team managed and although the show started a bit late, it started at a reasonable time and we were ready to go. 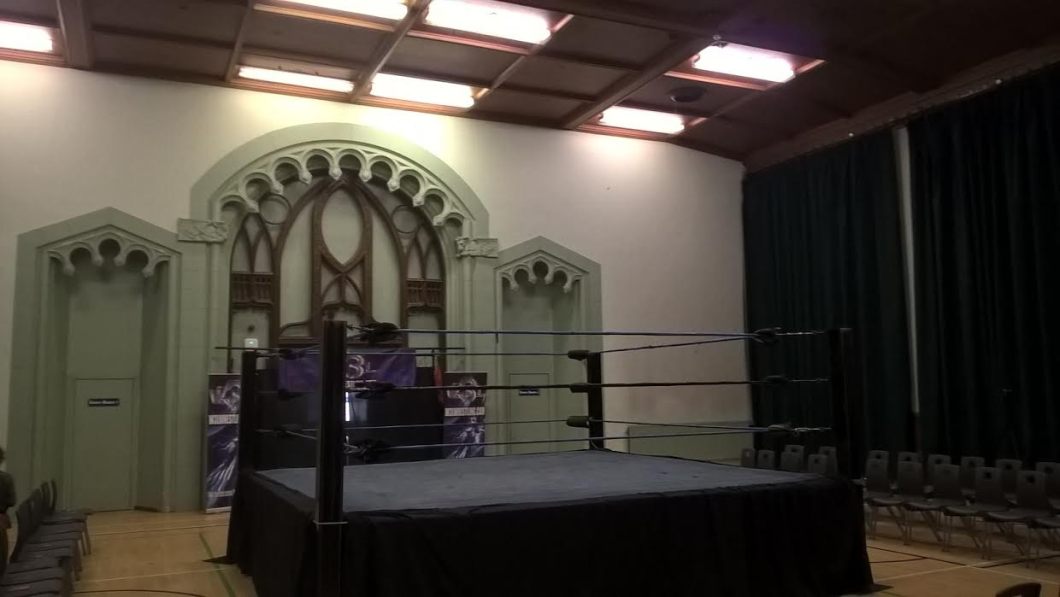 My opponent for the afternoon was TJ Rage, which would be our first time wrestling each other. I was feeling ambitious and decided to wear biker shorts instead of the singlet and although I am not in the shape I want to be yet, I know that I will get there. I managed to hit my Spinning Heel Kick I have started doing, as well as my revised God Save The Queen Neckbreaker, but TJ managed to get the win after a German Suplex followed by a Spear.

The main event saw Mike Musso and Jason Reed face The Contingency Plan combination of Dickie Divers and James Scott, with the fan favourites picking up the win. It was an enjoyable show and judging by reports from some of my peers, I was spared the wrath of foul-mouthed Falkirk youths at the gala day.

Once the show was all said and done, it was back to W3L HQ and then it was home time for yours truly, before I dropped the van off in Dundee the following morning. Unforeseen events and circumstances would make a lot of people question getting into wrestling in the first place and that particular day saw me leave the house at 7:40am and get home at 9:30pm, but all in all it was an interesting and fun experience that reinforced the fact anything can happen in this sport of ours. Good day.