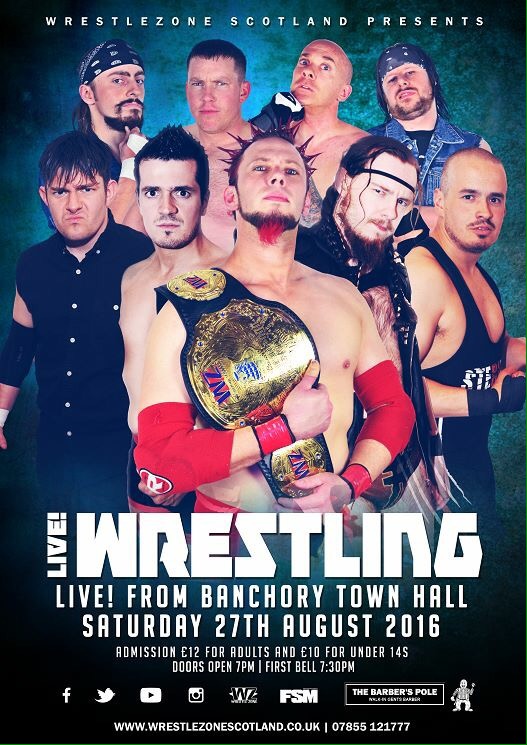 With the all the fallout of Battle of the Nations, WrestleZone return to the Banchory Town Hall this Saturday, August 27th, with a huge night of action set. 6 matches have been signed for the show, including a big Triple Threat main event.

The main event for this Saturday sees a huge non-title Triple Threat match between Sterling Oil’s Damien, Zach Dynamite and the Undisputed Champion Scotty Swift. With William Sterling suffering injuries following two Spears at the hands of Kaden Garrick, WrestleZone management have had to change the main event from the scheduled tag team match to this Triple Threat. For Damien and Scotty, this will be their second Triple Threat of the month after competing alongside Joe Coffey at Battle of the Nations. With Damien the one being pinned by Scotty, he will have the chance to gain a measure of revenge. Zach Dynamite can’t be forgotten about though, as he can strike whenever the opportunity arises. This is set to be a great main event.

The second match signed for Saturday sees Mikkey Vago of The Rejected squaring off with Bryan Tucker. Both men are coming off losses from Battle of the Nations but will have the chance to prove themselves again in Banchory. Bryan will be in for an extremely tough night, as not only will Vago likely have help from his Rejected partner Chris Archer, but he will have to keep a look out for his former tag partner Shawn Johnson. The former Hotshots are far from done with each other, and could very well write another chapter in their rivalry at the Banchory Town Hall.

After losing the tag titles two weeks ago, Mr P will be looking to rebound from that when he faces the other half of The Rejected in Chris Archer. It was this time last year when these two were on opposite ends of a tag title rivalry, with The Rejected even winning the titles at one point. Archer has the opportunity to showcase his abilities on Saturday after tapping out to Jimbo Bannon at the Northern Hotel. Both men will be looking to gain momentum for their respective teams, something that could lead to a potential title match for either of them against current champs The Sterling Brothers.

The Super Executioner vs Jason Reed

After making an unsuccessful debut at Proving Grounds, Jason Reed will be looking to rebound from his loss to Shawn Johnson when he faces the Super Executioner. Executioner is a man that hasn’t really had the best of luck in WrestleZone, having only won 1 match in his career. He will have the chance to get a huge win in Banchory against the ever cheeky Jason Reed, but Jason will be sure to make an impact in his second appearance in the company.

In a true battle of the behemoths, Kaden Garrick and Sir Andrew Wilde collide for the first time ever this Saturday in Banchory. Wilde will be riding a huge wave of momentum after beating Johnny Lions in the Battle of the Nations match 2 weeks ago. Kaden Garrick, however, wasn’t as fortunate as he was unsuccessful in his match at Battle of the Nations, losing the Tag Team Titles and being pinned for the first time in his career. A huge match is set for the Banchory Town Hall.

The final match scheduled for this Saturday sees Lord Mr Malice take on young Jimbo Bannon. Bannon has appeared at several of the Summer gala shows but didn’t make his official debut until Proving Grounds last month. Since then, I’ve been impressed whenever I see him step foot in the ring. Lord Mr Malice on the other hand, not so much. Malice is who you could call the comedy act of WrestleZone. It’ll be interesting to see how Malice fights back against the MMA expertise of Bannon.