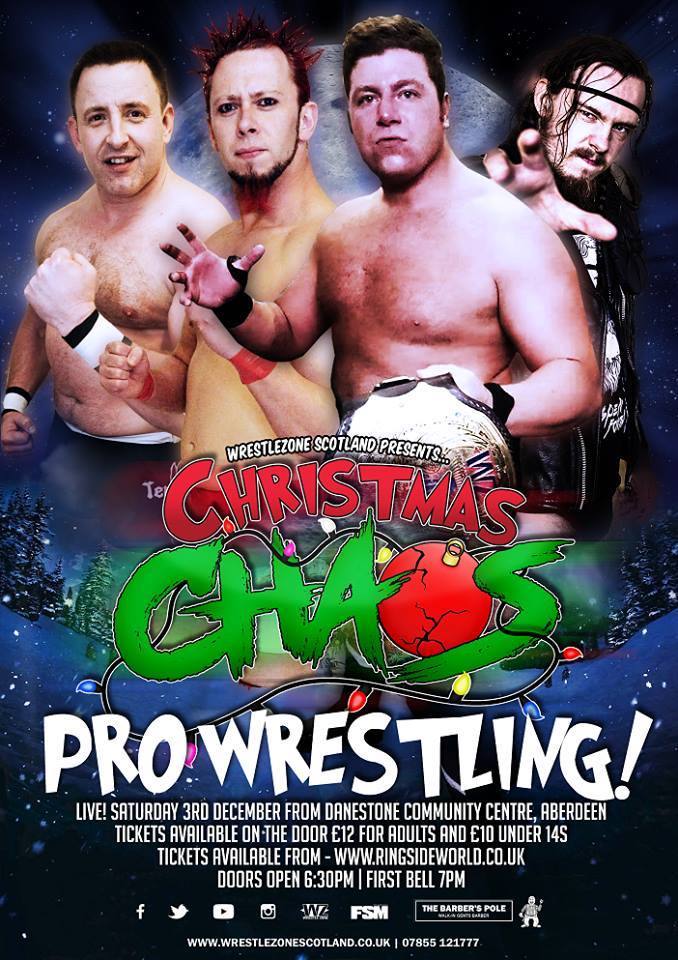 For the last time this year, the stars of WrestleZone returned to action as they debuted at the Danestone Community Centre in Aberdeen this past Saturday night for Christmas Chaos 2016. Huge shocks and massive announcements meant a show not to be missed. On a night where anything could happen, everyone was out to leave a lasting impression.

The show got off to a great start with Sterling Oil defending their Tag Team Titles against former champs Kaden Garrick and Mr P. While Alan and Shawn were gloating to the fans, they were attacked from behind by Kaden and P. The champions tried to escape to the outside, but the challengers both performed dives to the outside. With the action coming back into the ring, Shawn soon took a crash into the ring post, shoulder first. Mr P debuted some new moves in this bout, such as the air raid crash and the backpack stunner. Shawn and Alan had the majority of the match in their control, but Kaden soon took the advantage back for his team, even nailing Alan with a huge spear of the top rope. But it wasn’t enough, as Alan countered another spear and spiked Kaden into the mat with his trademark DDT for the win. Fans were shocked as the former two-time tag champs were now banned from teaming together. Kaden and Mr P went around ringside for high 5s one last time. But before they could go backstage, Kaden shoved Mr P into the ring post! He repeatedly shouted that he was being held back by P, before nailing his now former tag partner with a huge spear. Kaden went backstage while referees tended to Mr P. Kaden turning to the bad side was definitely going to be happening at some point. His aggression just makes him suit the role perfectly. Kaden really excelled in this match so I wouldn’t really be surprised if he’s a pick to win next year’s Regal Rumble.

In one of two qualifiers on this night, Zach Dynamite faced a last minute opponent in Chris Archer, who was accompanied by tag partner Mikkey Vago. Zach was originally scheduled to face Lou King Sharp, but he decided he had “better things to do”. Archer was in control for most of the match, using every move in his arsenal to try and advance forward in the tournament. But one little mistake led to Zach Dynamite using a rollup to advance to the next round. Both of these guys were exceptional during the match. Zach Dynamite, although he hasn’t appeared too much since his return in August, has shown he can go the limit. I wouldn’t be surprised if he appears for several other companies in 2017.

Before the next match began, Martyn Clunes entered the ring to announce WrestleZone were returning to Aberdeen’s Summerhill Hotel on Satuday January 21st for the first show of the new year, Summerhill Showdown. He then dropped an announcement regarding the show: making his WrestleZone return at the event would be Grado! Great to see Grado back in the Granite City after he had to miss out on Aberdeen Anarchy back in June.

Up next was the match I was looking forward to the most; the British rules match. All the small details about this match made it even better; the referee standing for pinfalls, the difference in choice of drinks as Jimbo drank some water while Aspen chose to have a Red Bull and of course, Aspen bringing back one of his old trademarks; the stool with Jimbo’s face on it, as opposed to having Len Ironside’s face on it. The action came quick, with Aspen Faith soon earning himself a public warning. Jimbo picked up the first fall when he synched in a triangle choke. Instead of resting in his corner during the interval, Aspen pounced on Jimbo, targeting his arm. As soon as the next round began, Aspen locked in a fujiwara armbar to earn the second fall with an immediate tapout from an injured Jimbo. The two continued brawling, before Aspen attempted to use the stool. Luckily the referee seen him and took it away before the damage could be done. However this left him distracted, allowing Aspen to deliver a swift kick below the belt and spike Jimbo into the mat with a brutal looking tombstone for the 3rd fall, winning the bout 2 falls to 1. Aspen and Sammii celebrated the victory after the match, while Ross McTavish attempted to let the referee know what had happened when he wasn’t looking. The referee refused to reverse his decision, leaving Aspen as the winner despite the tactics he used. What a match this was. Jimbo may still be a rookie but on this night, he proved he can hang with the big boys.

The show then went to a quick 15 minute interval, where fans could get pictures and autographs with Zach Dynamite and purchase raffle tickets.

After the short break, we were getting set for the annual Christmas Brawl. Shawn Johnson’s music hit, before the Sterling Oil grappler entered for the second time in one night with a bandaged arm alongside Richard R. Russell. Russell told the referee Shawn wasn’t cleared to compete after taking a trip shoulder first into the ring post earlier in the night. Bryan Tucker interrupted them, saying the doctor backstage had indeed cleared Johnson to compete before hitting him in the skull with a microphone. These two brawled all over the ringside area, with a turkey, an inflatable Santa and a sleigh all being used. Richard R. Russell got a bit too close to the action, being covered in a trifle at one point. The action soon returned to the ring, where a steel chair and a kendo stick decorated as a candy cane became involved to inflict pain. Shawn nailed his old finishing diving double foot stomp to the back of Tucker, but it wasn’t enough to pick up the win. Shawn went over to the side of the entrance way, where he grabbed a table wrapped in Christmas paper. A turnbuckle was also exposed, which saw Shawn shove Bryan face first into it before shoving him into a chair placed in the turnbuckles, shades of Battle of the Nations, for a near two count. Shawn went to use the table, looking to perform a double stomp to the head, but Bryan managed to counter his attack into a huge powerbomb through the table for the win. Bryan celebrated his victory, as the rivalry between The Hotshots appears to be at an end. It took a while for the security to clean up the mess made inside the ring before the show got back underway.

Before the final qualifier began, Martyn Clunes invited WrestleZone management’s Len Ironside into the ring to reveal the Tri-Counties Title. Len said this new belt was to showcase the best wrestlers the UK had, before he announced the finals of the tournament would take place in Westhill in April next year. Len then unveiled the title belt, and what a beauty of a belt it is.

Damien entered first before Jason Reed burst throught the curtain, my first time seeing him live in person. These two have fantastic chemistry with each other, which is surprising as, to my knowledge anyway, this is there first time facing each other one on one. Jason nailed a beautiful dropkick later into the match, and boy does he do a good dropkick. Jason nailed several superkicks to Damien’s knee throughout the bout but failed on seperate occasions to conect with one to the jaw. Finally, Jason nailed the superkick to the jaw, but Damien managed to do the same and followed it up with his signature one knee Codebreaker for the win, joining the final 8. Damien will now face Irish high-flyer Bingo Ballance in the quarterfinals at some point next year.

The raffle was then drawn before WrestleZone management representative Chris McDonald entered the ring for an announcement fans were dying to hear. He was there to announce the first former WWE superstar that he had signed for Aberdeen Anarchy 2017. For the first time in history, it was a female guest; former WWE Women’s Champion Mickie James! Fans were left with excited faces as they couldn’t wait to see Mickie come June 17th.

Chris then invited out a guest that always appears at Christmas Chaos events, as he called Santa Claus down to the ring. But we were instead greeted by Lord Mr Malice, dressed as Santa, and Jeeves Winchester, dressed as an elf. They said fans would be getting nothing for Christmas this year and even cancelled the annual holiday. The real Santa Claus then came out, joined by Cysto. Santa and Cysto took out the imposters, before handing out gifts to fans. T-shirts, chocolates and signed Tatanka 8x10s were among the gifts. Chris McDonald then invited Cysto and Santa to remain at ringside as the special guest timekeepers.

The main event for the evening saw Andy Wild put his recently won Undisputed Title on the line against Johnny Lions and former champion Scotty Swift. Swift and Lions teamed up on the much larger champion, each nailing a dive to the outside, although Johnny got more floor than Andy. Andy battled back and took out both challengers, before focusing on Scotty. While those two battled it out, Johnny ascended to the top before diving off with the Flying Lion missile dropkick on both men. Andy again fought back with a Wildest Driver on Swift but Johnny broke it up at the last second. With Andy angered at not winning the bout at this stage, he started mouthing off to Santa. Although Santa offered the champion a Barbie doll as a gift, the referee decided it would be best for Sants to return to the backstage area to avoid further distraction. While the refere was distracted forcing Santa back through the curtain, Johnny nailed a Lion Cutter on the champion. He attempted to follow it up with the BLE, but Cysto hopped up on the apron and shoved The Tenacious One off the ropes. Andy picked up the victory to retain his title again, while Cysto revealed his identity; it was Damien! Damien, obviously still not done with his former tag partner, cost Johnny his chance at the Undisputed Title. Not the way anyone wanted this huge bout to end.

What a way to end the WrestleZone calendar. The whole crew outdone themselves on this night. All eyes now look to Summerhill Showdown on January 21st with the return of Grado and the start of round 2 for the Tri-Counties Title Tournament.